In 2010, Holger Voss explained the work of Cinesite on HARRY POTTER AND THE DEATHLY HALLOW PART 1. He then worked on many films like JOHN CARTER, ROBOCOP and EDGE OF TOMORROW. As a VFX Supervisor, he took care of the effects of films such as X-MEN: DAYS OF FUTURE PAST, SAN ANDREAS and INDEPENDENCE DAY: RESURGENCE.

How did you get involved on this show?
Initially, the VFX were overseen by Stephane Paris, who did the on-set supervision. He left and I took over when reshoots began at the end of January. I then supervised pretty much the entirety of the post production phase as well as the reshoots.

How was the collaboration with director Dexter Fletcher?
There was no intermediary so we were always dealing directly with Dexter and that made things very easy. His approach was always narrative driven; as long as the story was respected he was open to suggestions. He would tell us what he wanted it to look like, the mood or effect he wanted us to achieve and he wasn’t particularly interested in how we got there or what route we took. Whether through CG, 2D or digital matte painting, it was our job to figure out that side of things.

Dexter was based in London and the visual effects team was in Montreal, but that was never a problem. He came in to the London office twice a week and we would do synced reviews via google hangouts and RV. Towards delivery, the review sessions became daily. We never felt like the distance gave us any constraints and the review system worked seamlessly.

How did you organize the work with your VFX Producer?
VFX producer Thomas Tannenberger is very experienced, he’s been working in the industry for over 20 years. His expertise, along with that of our compositing supervisor Aurore Du Blois and also our head of roto, meant that I was able to concentrate my efforts on the more complex work, whilst they took care of the ingest, QC and more straight forward effects. 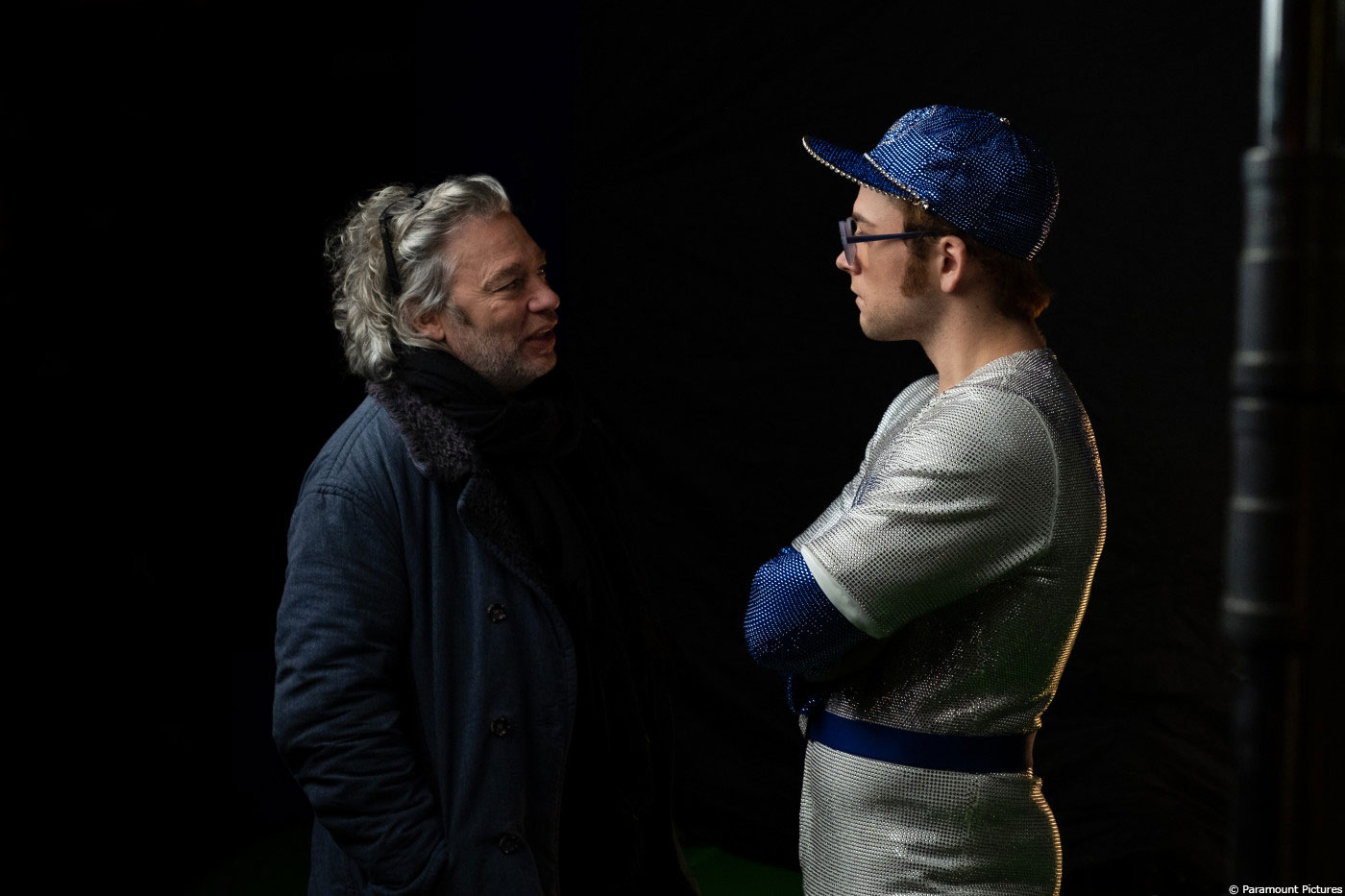 What are the sequences made by Cinesite?
There was a lot of stadium work and crowds as Elton performs on stage, as you would expect. There were also set extensions and digital matte paintings including New York, London and Los Angeles. Clean up and de-modernisation formed a substantial part of the work because the film revisits episodes from Elton’s childhood and earlier career in the 50s, 60s and 70s. But we were also facilitating the many dream sequences and surreal episodes throughout the film with a range of visual effects.

What was the look of the film that Fletcher was going for?
The film is set from the perspective of Elton looking back over his life. The action moves from him in therapy recounting stories, to flashbacks, dream sequences and remembering important periods of his past through his drug-fuelled perspective. The transitions between these episodes are important and we were often involved in the creation of those. In a way, the whole movie shows Elton’s attempt to connect everything from his life together.

Can you tell us more about the creation of the single 3-minute shot?
There are several smart transitions in ROCKETMAN. This shot shows Elton’s early career as he plays the pub circuit around London. Although the final shot is 3 minutes long, we handled it as 9 separate takes which were ultimately all stitched together.
The start of the shot shows young Reggie playing in a pub, getting thrown out and moving across the street and through a fence into a funfair. As he emerges through the fence he transitions into the adult Elton (Taron). After moving through the fair with people singing and dancing around him, he ends up back in the same pub the shot started in. It was pretty much the first shot we started on in post and the last shot out at the end.

Can you explain in detail about the creation of the underwater scene?
This is the eponymous Rocketman sequence. Elton falls into a swimming pool, where he sees a younger version of himself wearing a spacesuit and playing a miniature piano sitting on the bottom. They sing Rocketman together. The child was filmed dry on a bluescreen set without a helmet and Taron was filmed separately in a pool. The pool was not designed for the task – there were tiles in some areas but not others – so layout changes were required. There was a lot of clean up, removing cables and cameramen, adding “God rays” and lighting effects.

No reflection matte had been filmed for the underwater shots, so we took reference from the Taron footage to make the dry shots with young Reggie work. Bubbles coming out of Reggie’s CG breathing device and particulate within the shot were created to match the tank footage of the divers. We added the glass space suit helmet onto young Reggie, which required the integration of realistic reflections, particularly in shots where the younger and older Elton are close in shot together.

Later in the sequence, after Elton’s recovery, he appears back on stage in the Dodgers Stadium in his infamous silver baseball outfit. The Rocketman sequence ends with him taking off like a rocket into the sky. A Houdini fluid simulation was used to create the rocket exhaust as he lifts from the stage, transitioning into a CG person as he ascends above the stadium. 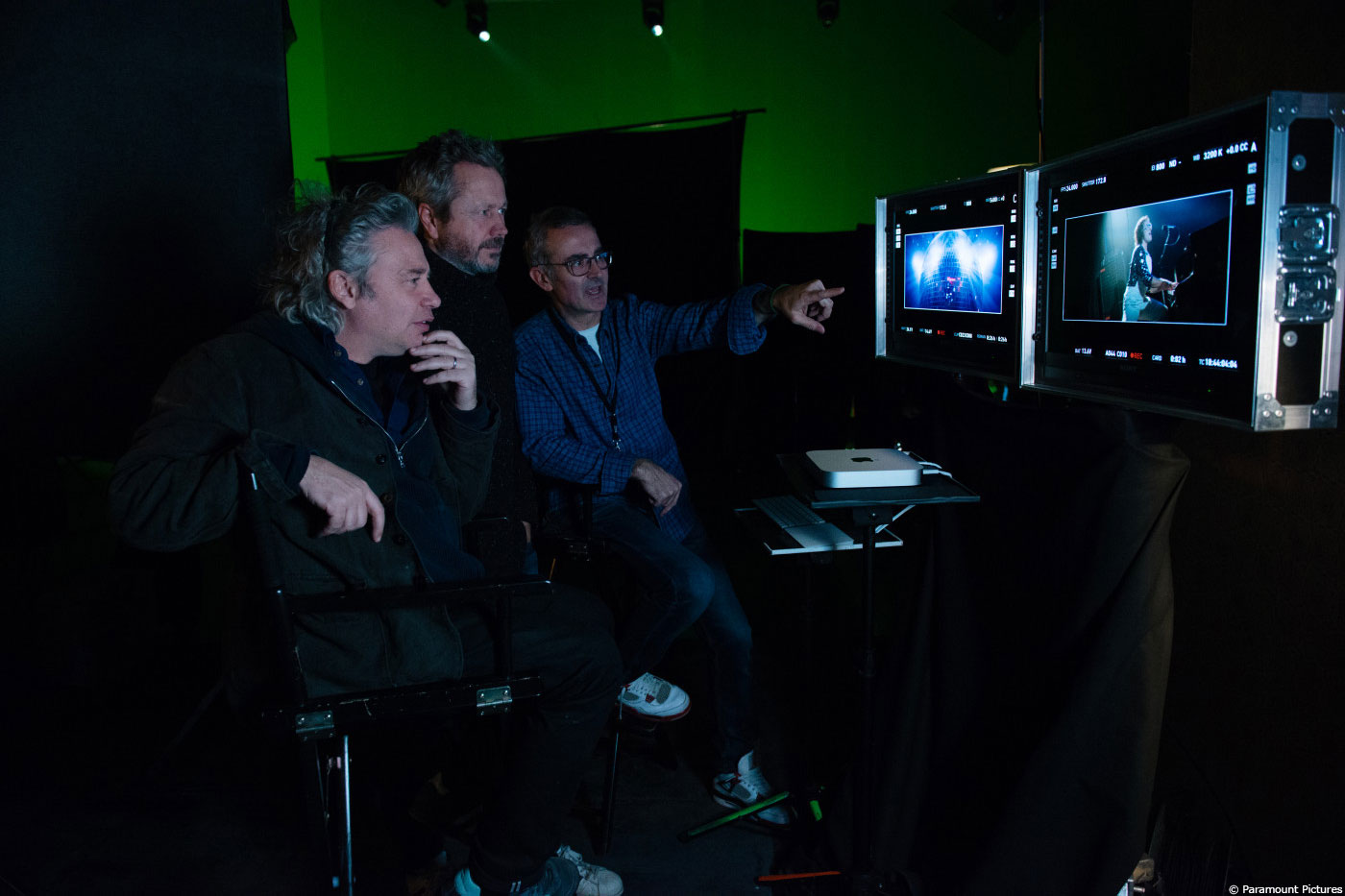 How did you handle the creation of crowds in the multiple stadium shots?
Dexter wanted as much flexibility as possible to direct the stadium shots as part of the principal photography and was keen not to let a commitment to complex crowd systems impact upon that process. Most crowds are seen from Elton’s perspective on the stage, all looking in one direction, and the camera is grounded behind him most of the time. This meant the simplest approach and the one favoured by Dexter was viable; that of sprites. The people were layered on multiple cards and placed into the shots.

There were two shoots for the audience. The first included about 60 people wearing a single costume and the second 40 people in two costumes each, so we had a good number to populate the cards. Reference for the look of the audience was taken from the iconic 1975 Elton concert at the Dodgers stadium. The time of day was different, but it was still very useful indeed.

The trickiest part of using the sprites technique for crowds is in creating convincing variety when you’re re-using the same people multiple times. The Dodgers concert guided us in adding banners, beach balls flying overhead, lighters and sparklers, all of which help sell the final shots. POVs from the audience were much more tricky because we needed to create passes for multiple angles and keep consistency in the processing and naming conventions. But the simpler approach worked and gave Dexter the control upfront with the disadvantage of being limited to more grounded cameras.

How did you create the long shot with the spinning piano?
This is the Pinball Wizard sequence, where Elton is performing at a piano and the camera is pretty close on him as he spins in circles through a montage of concerts. The original idea was for the shot to take place inside a pinball machine. This idea was subsequently dropped and another approach considered was to put crowds in the background and keep it pretty straight.

I suggested we wipe between various stadiums and concerts, with the lid of the piano marking the camera transition points. The turnover of the sequence came pretty late in production, but we presented early layout renders with a rough key of the live action to demonstrate to Dexter how this approach might look. We had developed a good degree of trust and he was happy to let us go with it. Having that degree of creative input into what is a stand out shot from the film was very satisfying from a personal perspective.

Which sequence or shot was the most complicated to create and why?
Using the sprite crowd system and managing that technique to create the required believability was challenging at times. I’m proud that the team made it work. The Pinball Wizard sequence with the rotating piano was started and completed within the final 5 weeks. It was great to have that much creative freedom, but we knew we only had one chance to get it right!

Is there something specific that gives you some really short nights?
We gained Dexter’s confidence early on and knew we would not get any curve balls. He was very easy to work with, so stress levels were pretty low. There were editorial changes right up to the end but that’s normal in VFX.

What is your favourite shot or sequence?
I particularly like the end of the Rocketman sequence in the Dodgers stadium, as Elton is performing in front of the crowd. The element of Taron was shot well and it was one of the earliest sequences we received, so we had time to work it through and it had been well thought out. That shows because it looks great.

What is your best memory on this show?
Proposing approaches and having Dexter’s confidence in my suggestions was very rewarding. He was a pleasure to work with as a client.

How long have you worked on this show & what was the size of your team?
I came on board quite recently at the end of January 2019 and saw the show through to delivery at the end of April, although Cinesite had been working on ROCKETMAN since October 2018. I believe the team totalled around and we completed work out of the Montreal studio, where I was based.

What is your next project?
Twins! My little boy and girl have just arrived so I’m expecting a few sleepless nights…