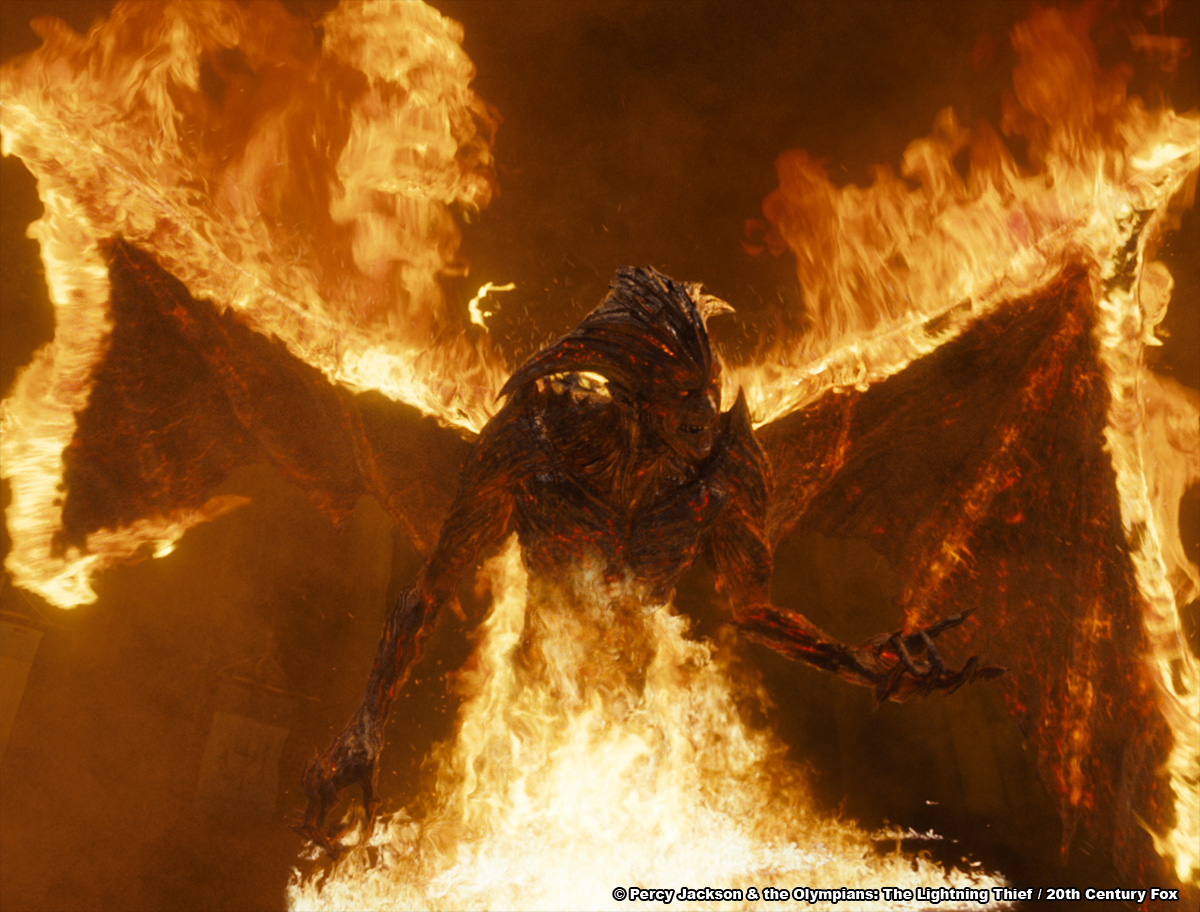 Guillaume Rocheron begins his career at BUF in 2000. Having worked on films such as PANIC ROOM, ALEXANDER and BATMAN BEGINS, he left to join the teams of MPC in London. He worked on SUNSHINE, 10’000 BC or HARRY POTTER AND THE HALF BLOOD . In 2009, he moved to MPC Vancouver to work on PERCY JACKSON.

What is your background?
I have worked for MPC since May 2005. Before hand, I spent 5 years at BUF Compagnie, working on a number of commercials and some film projects including ALEXANDER for Oliver Stone, BATMAN BEGINS and THE MATRIX RELOADED. I started at MPC London towards the end of production for HARRY POTTER AND THE GOBLET OF FIRE, i then moved on to lead lighting TD on X-MEN3 and ELISABETH THE GOLDEN AGE and CG Supervisor on 10.000 BC, HARRY POTTER AND THE HALF BLOOD PRINCE, GI JOE: RISE OF COBRA, SHANGHAI and NIGHT AT THE MUSEUM 2.

How did you get involved on PERCY JACKSON?
Discussions about moving to the Vancouver studio started in January 2009. At that time, the studio was still pretty small but I was interested as the visual effects market was growing very fast in Vancouver. PERCY JACKSON being awarded to MPC was the perfect opportunity for me as the type of work was right up my street. 2 months later, I was on a plane to Vancouver ; 4 days later, i was on set! In the following weeks, most of the rest of the key team members arrived from MPC London. By the end, around 85 people worked on the project in the Vancouver studio.

How was the collaboration with the director and the production supervisor Kevin Mack?
After the shoot, Chris Columbus, Kevin Mack and the movie production team were based in San Francisco and we were in Vancouver. We reviewed the work with Kevin on a daily basis via Cinesync. Kevin knew what the director was after and was giving us notes and comments to make sure what we were doing was fitting within the context of the film.

What are the sequences made at MPC?
MPC worked on 9 sequences, the main ones being the Minotaur Attack, the Hades Bonfire and the Hades Mansion where we took care of the Hellhounds and the Lost Souls.

Hades is awesome. How did you create and animate it?
Hades was by far the most difficult character for 2 reasons: Firstly, he has to perform and secondly, he is a character made entirely of charcoal and fire. When he is not transformed as a demon, Hades is played by Steve Coogan. One of our challenges was to integrate characteristics of his acting into our CG character. To achieve this; we captured dialog scenes and a library of facial expressions using the Mova Contour Capture system which allowed us to create a very high resolution animated reconstruction of Steve Coogan’s face in 3D. We then used and improved our in-house motion blending tools and facial rigs to manage and manipulate the pretty dense data. The point cloud was around 600 tracking markers per frame which meant we could capture all the subtleties of the performance, even including the small vibrations under the eyelids which are generally filtered like noise by standard motion capture solutions.

The perception of a performance can change a lot once transferred into a 12 foot character like Hades. Because of the size and camera angle difference and the fact that his face is made of charcoal and lava cracks instead of humanflesh, we had slightly tweak the performance. The challenge was to do this in a non destructive way, paying attention not to change or remove key elements that defined the original performance that Chris Columbus wanted to capture.

The second challenge was to create the fire in which Hades appears and is also emitted from his giant wings. The fire was an important component in the style and acting of the character : the flames are slow and gentle when the dialog is quiet, they get bigger and faster when he suddenly gets angry and they become really fast and explosive when he wants to show his power by throwing fireballs. They require such precise control that we quickly took the decision to use CG fire instead of elements. In general, CG fire is used for quick events like fire balls, explosions, burst of flames etc… In Hades case, the fire is always there, but sometimes its not doing anything spectacular so you have time to really look at it, analyse his movement and details. It was impossible to use the standard techniques which are generally used when creating a fairly low resolution simulation and artificially enhance the visual details by mixing it with 3D noises or fractals. These don’t contribute to the quality of the movement and the simulation. For a few years now, we have worked with Flowline, the fluid simulator from Scanline and we’ve pushed it as far as we could within the time we had for the project. Every voxel of the fluid simulation was around the size of 1 millimeter which ensured that almost every pixel of visible fire on screen was contributing to quality of the movement. This is around 50 times the resolution at which we’ve simulated fire previously. Each wing was taking around 15 hours of simulation per shot, splitting the simulation across 3 machines which seems long but is finally pretty reasonable if you take in account the resolution they’ve been done at. Fluid simulations are by nature very difficult to control. Our FX team really did a fantastic job in finding methods and rules that would allow us to control that fire according to what Hades would do in every shot, without compromising the quality of the movements and details.

Can you explain to us the conception of the Lost Souls?
For the Lost Souls, the challenge was different than it was for Hades fire. We had to create a supernatural fire inferno in which hundred of creatures are trying to escape. Kevin Mack shot movement and action references with 3 HD cameras which we used to create a library of movements for our CG creatures. We then enlarged the fireplace by destroying his edges using PAPI, MPC’s rigid bodies dynamic software, so the fire inferno could get a lot bigger and so the effect could look a lot more threatening. Using the same technology developed for Hades fire, we created different layers of simulation: a fire vortex inside the fireplace, huge flames rolling on the exterior walls as well as a fire element for each creature within the fireplace. We spent a lot of time then integrating the fire in the plate, added flying embers and fine-tuning heat distortion.

MPC creates a whole bestiary for this movie. What references did you have?
For all the characters, we started from concept artwork by Aaron Sims as approved by the Director. For Hades, the Hellhounds and the Minotaur, we spent time converting the 2D concept into a 3D sculpt in Zbrush. It was important to make a version that would work in 3D and to get it approved by the director before starting the time consuming task of making a “production ready” character. We used hyena anatomy reference for the Hellhounds and a mix of human and bull references for the Minotaur body.

How did you create these mythical creatures?
After getting our Zbrush 3D concept approved, we modelled the creatures in Maya, paying attention to muscle groups. We then layed out a skeleton and muscles using MPC’s in-house solutions. The rendering was done in PRman via Tickle, MPC’s rendering tool and ShaderBuilder, MPC’s look development tool. Fur groom and fur dynamics were done using MPC’s fur tool, Furtility.

What was the most complicated creature to do?
Without hesitation, Hades. On top of the CG fire and the facial performance, we spent time defining how we would light him, with Hades being his own light source. We wrote tools to convert our fluid caches into Renderman point clouds so the fire would illuminate Hades using the color bleeding technique.

How did you add the legs of Chiron and Grover?
We roto-animated each actor in 3D so we could have their exact position in each shot and connected the CG legs or horse body perfectly to their waistline. We then animated the CG body so it would work with the actor’s performance. The most time consuming task was in fact painting out the actor’s legs from the plates. It is a pretty straightforward task when the background is pretty empty but can be very difficult when you have a full crowd behind the actors !

Did you use specific in-house software (for hair and fire)?
MPC uses a wide range of in-house software. On top of the shot pipeline and asset management tools, Tickle is our rendering interface with PRman, ShaderBuilder is our look development tool, Alice is our crowd software ( that we are using to process motion capture clips ) and we are using Flowline by Scanline for large scale fluid simulations.

What is the shot that prevented you from sleeping?
There’s been more than one !

Have you encountered any difficulties as such as unplanned things?
The unexpected always happens as you move through production on a project, some ideas that end up working great and some others that need changes. We were asked for example to make the Lost Souls look more threatening than what was defined in the original idea; so we had to change a few things to make the fire bigger, see more of the creatures etc… At the end, I think these changes were right as they really gives a nice momentum to the sequence.

What did you keep from this experience?
Being involved on a project like PERCY JACKSON has been a great opportunity, mainly because of the range of effects we’ve had to do : 5 different creatures, couple of transformation shots, some crowd and destruction and a lot of fire !

What is your next project?
SUCKER PUNCH by Zack Snyder…

What are the 4 movies that gave you the passion for cinema?
It is hard to lock it down to 4 films only. I really love movies by Brian De Palma and David Fincher.

Thanks for your time.