Betsy Paterson has worked in visual effects for over 23 years. She worked on many films such as BABE: PIG IN THE CITY, SCOOBY-DOO, THE INCREDIBLE HULK, THE HUNGER GAMES and MARCO POLO.

What is your background?
I worked at Rhythm & Hues for 17 years, I’ve been a VFX Supervisor since 2001. When R&H declared bankruptcy I moved over the client side of supervising.

How did you get involved on this show?
I had been looking for a TV project that really pushed the limits of VFX. I love doing creature work, and this had such a wide variety of really challenging characters to help create.

How was the collaboration with the show runners?
The show runners were very collaborative. They wanted fantastical effects that felt grounded and gritty, part of a world that isn’t ours, but nonetheless very real and physical.

How did you organize the work with your VFX Producer?
I worked closely with Lea Prainsack on the show. She handles all things schedule and budget related, while I cover creative and technical.

Where was filmed the various parts of the show?
The show was filmed in Prague and various locations around the Czech Republic.

Can you tell us more about the previs and postvis process?
We did pre-viz for some of the trickier camera work, and a few of the big action scenes. Storyboards were extremely important. It was mostly about making sure we had a practical, efficient approach to each creature and environment, and lots of meetings to make sure everyone understood that approach before we got on set!

Post-viz for the creature work was handled by the individual vendors on each creature. Other post-viz was handled by our in-house team, which was organized through Revolt 33.

How did you work with the art department for the various creatures and environments?
I worked very closely with the production designer and the cinematographers to make sure we were building a cohesive vision of the world of the show. CARNIVAL ROW was a great experience creatively because it really was building a new world from scratch. We tried to base a lot of the physical geography on Prague, since that’s where we were shooting, and also to give the city a more real world, grounded and gritty feel. There was at least a partial build for every set. In many cases VFX created the third and fourth wall, or continued the buildings above a certain height. We worked very closely with the production designer and art department to make sure that anything we added fit within the world being envisioned. We had a VFX concept designer who would detail out the set extensions during production so that Francois could have input way before we got to post-production.

And on top of world building we also had many creatures with varying levels of VFX involvement. I worked very closely with the brilliant Nick Dudman, who handled all the prosthetics and special effects makeup. We looked at each creature as it came along and worked out the best way to realize it. Some of them required no help at all from VFX, some of them were fully CG creatures, but Nick and I collaborated on all of them to make sure it was a seamless process for the film makers. 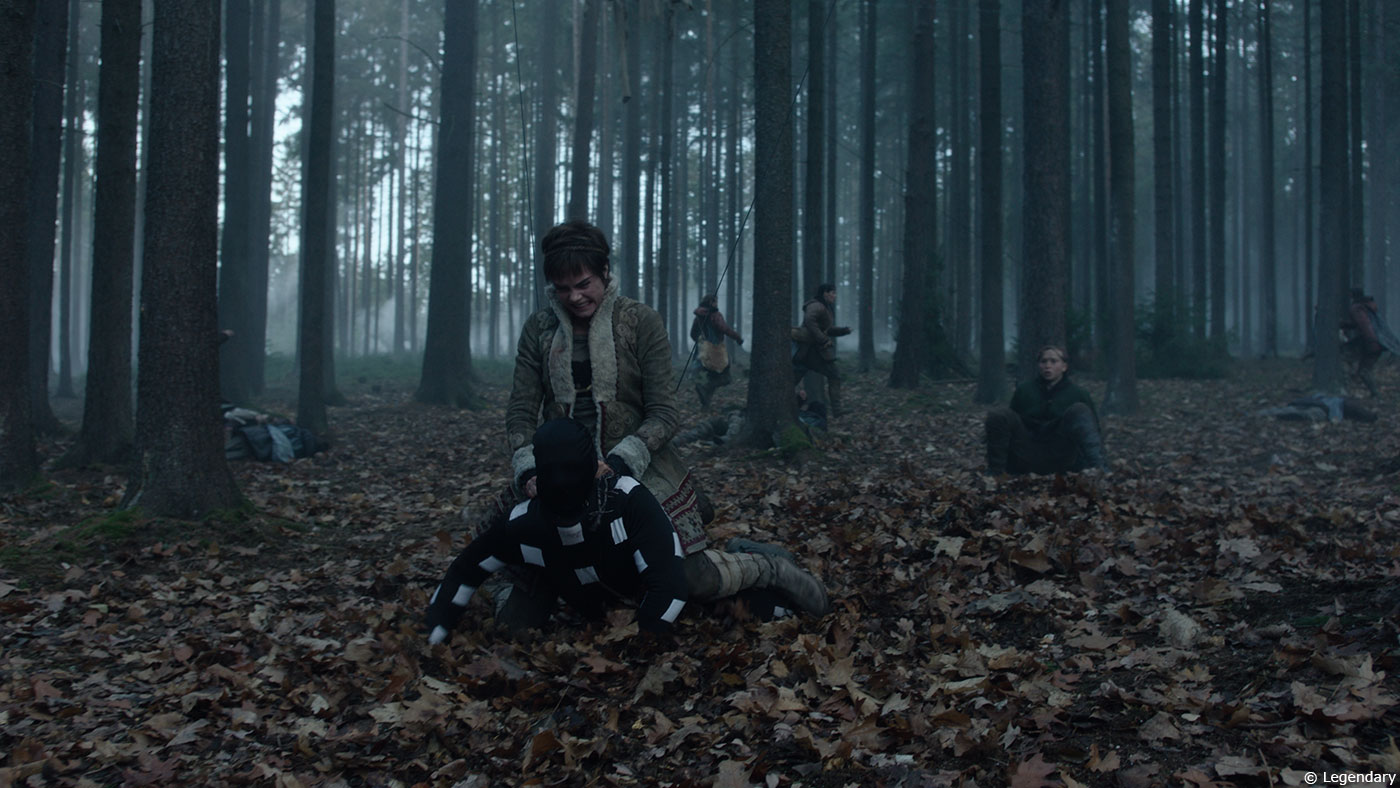 Can you explain in detail about the design and creation of the Faeries and their wings?
The Faeries were a great example of practical prosthetics working together with VFX. When the Faeries are not flying, they wore silicon wings. As soon as the wings needed to move, whether for expression or for flying, we took over with VFX. Sometimes we would add CG wings just so that we could add an extra layer to the performances. We wanted to create the impression that they use their wings as part of their body language. We looked for any small nuances in the actors performances that we could subtly amplify with the wing animation.

How did you manage the challenge of the Faeries takeoffs and landing?
Whenever physically possible, we used wire pulls right on set. There was an extreme amount of rig removal on this show!

How did you handle the animation of the Faeries when they are flying?
If they were flying any distance, we usually had to shoot green screen stunt elements. These were be comped in to the plates, and the CG wings were added after the rigs were removed. There are always subtle changes in the speed and movement of the wings to indicate direction and speed changes. We rarely used full CG Fat, but was necessary in a couple of more complex shots. In the first shot where we see Vignette fly, when she jumps off the cliff, she transitions from live action shot on location, to full CG, then back to a live action green screen element.

How did you create the various shaders and textures of the wings?
Pixomondo took the lead on this. They would have to speak directly about the technical specs. 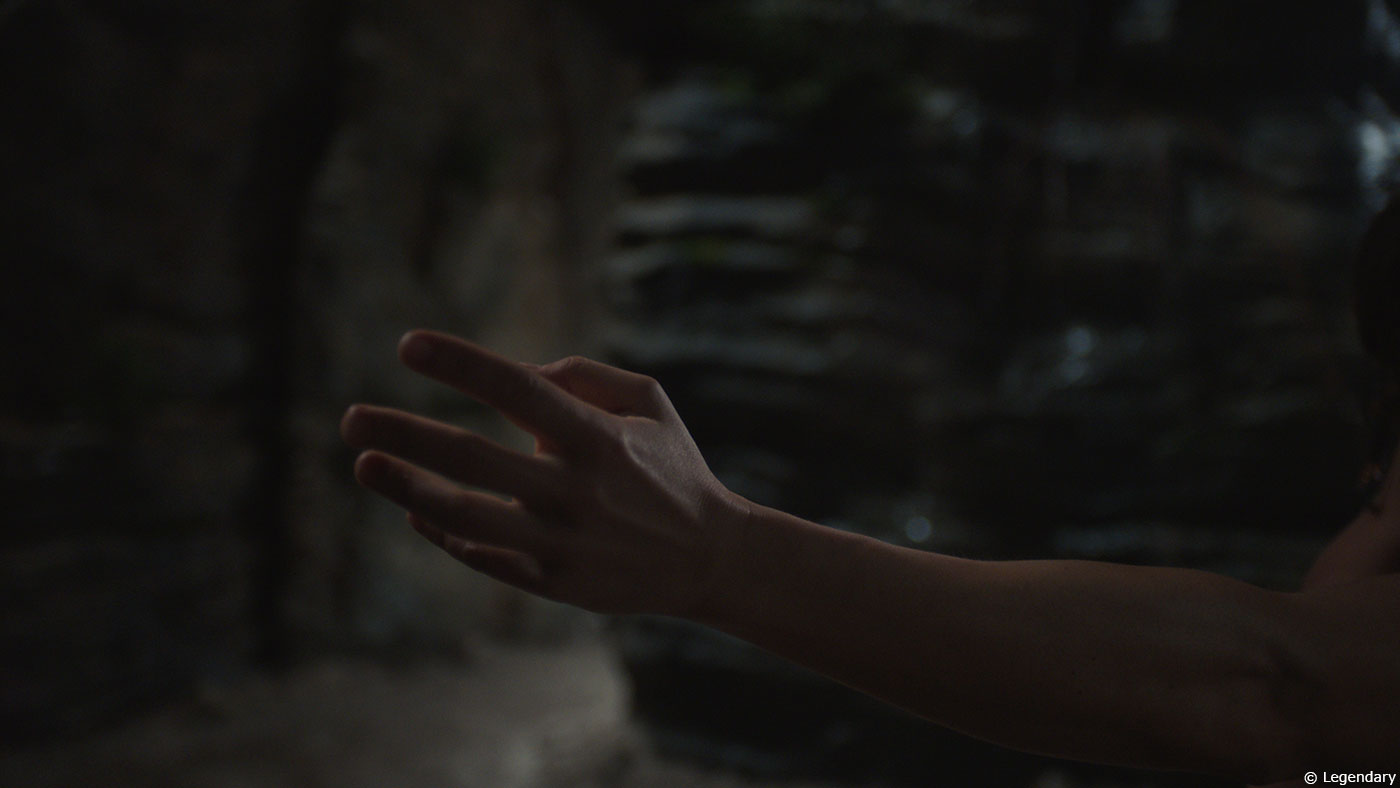 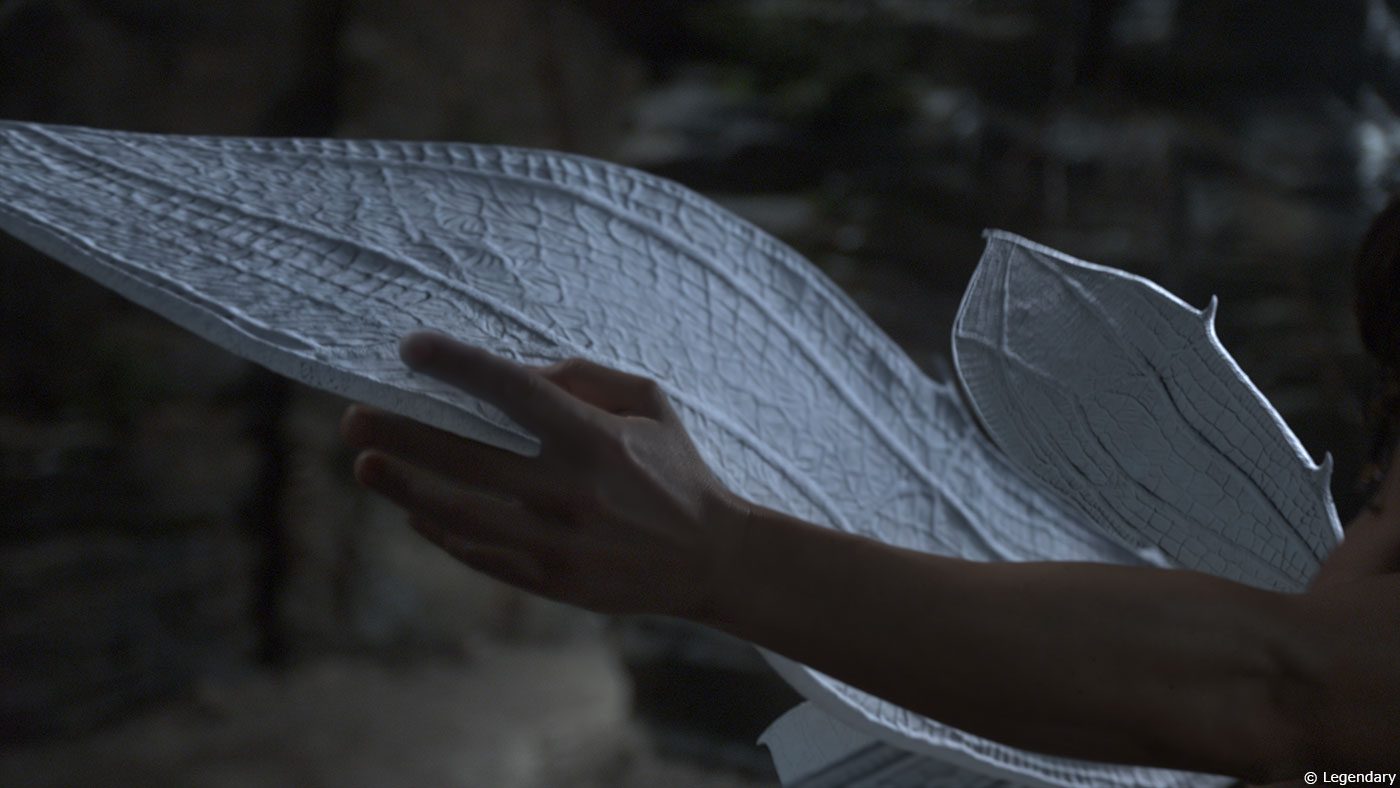 In addition to the Faeries, there are many more creatures and especially a big bad one, the Darkasher. What kind of references and indications did you received for it?
The Darkasher was a challenge. Travis, the show creator, wanted it to be something we’ve never seen, that looked like it couldn’t have been built out of spare animal parts magically re-animated. We had a temporary rubber suit for the stunt performer based on an early creature design. This helped us with the interaction with Orlando, and gave the actors something to react to on set. We always knew we would have to augment it, but we ended up fully replacing it so that we could have full control over the animation and look. We hired 4 different creature designers to come up with any off the wall things they could think of, and we ended up using bits from all of them. Image Engine was really instrumental in pulling it all together. He’s quite a complicated creature, with holes and rotting chunks, and of course, those tentacles.

Werewolves are also part of the show. How did you approach this creature?
The werewolves (called Marroks in the show) were another creature that had to look different from what’s been seen before. Creature designer Arron Ingold helped us with that one, and he really did a great job. We used pitbull and hyena references, and decided at the last minute to make them almost completely hairless. I wanted them to feel believable through the transformations, so using the same basic mass and hair distribution as their human selves was important. If you look closely, one of them even has a mustache!

How did you work with the SFX and stunts teams?
We worked very closely with Stunts and SPFX. All of the fights, flying, water and explosions start with physical production. We always try to take everything as far as possible on set, and then expand and enhance with VFX in post. 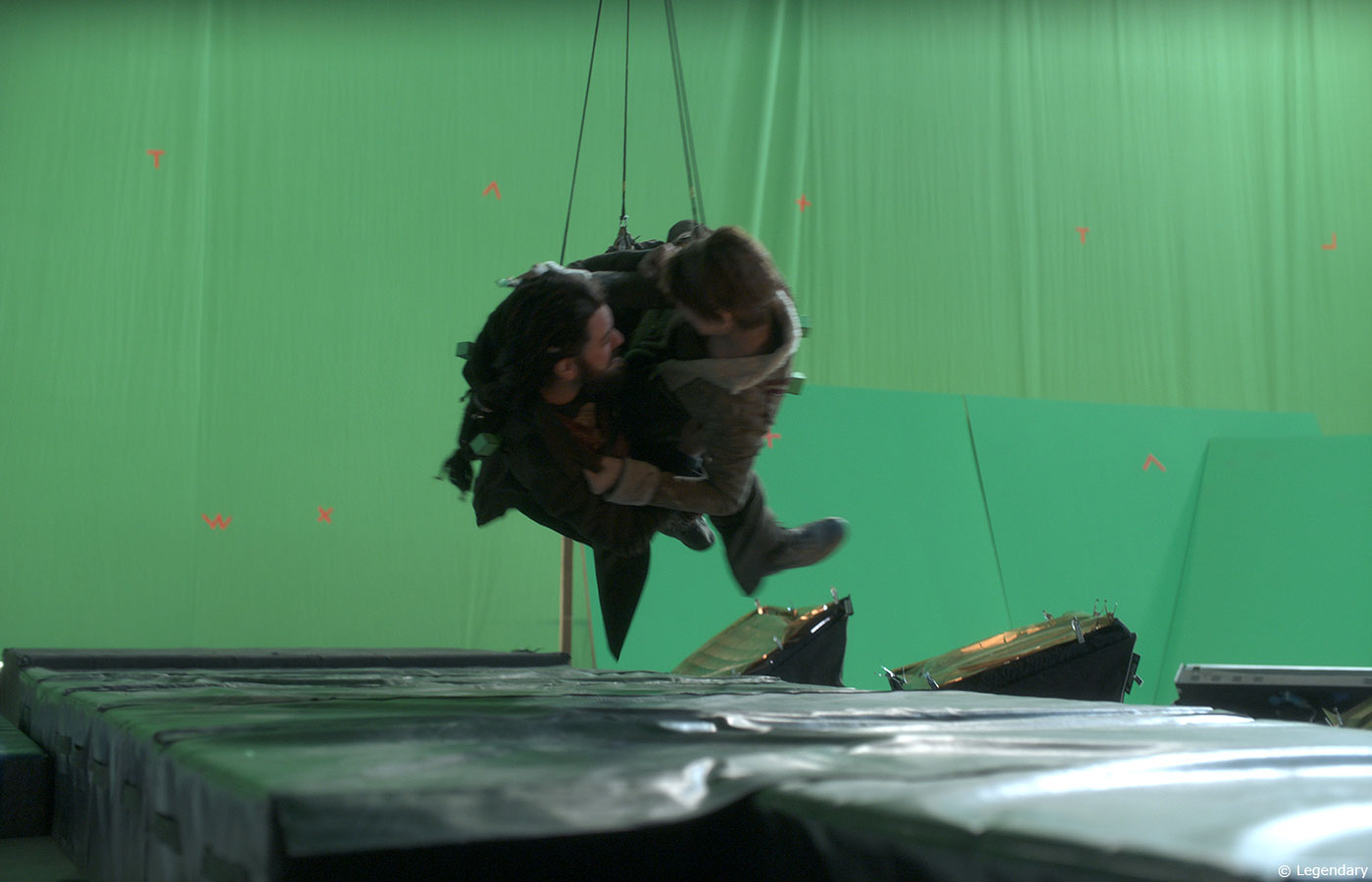 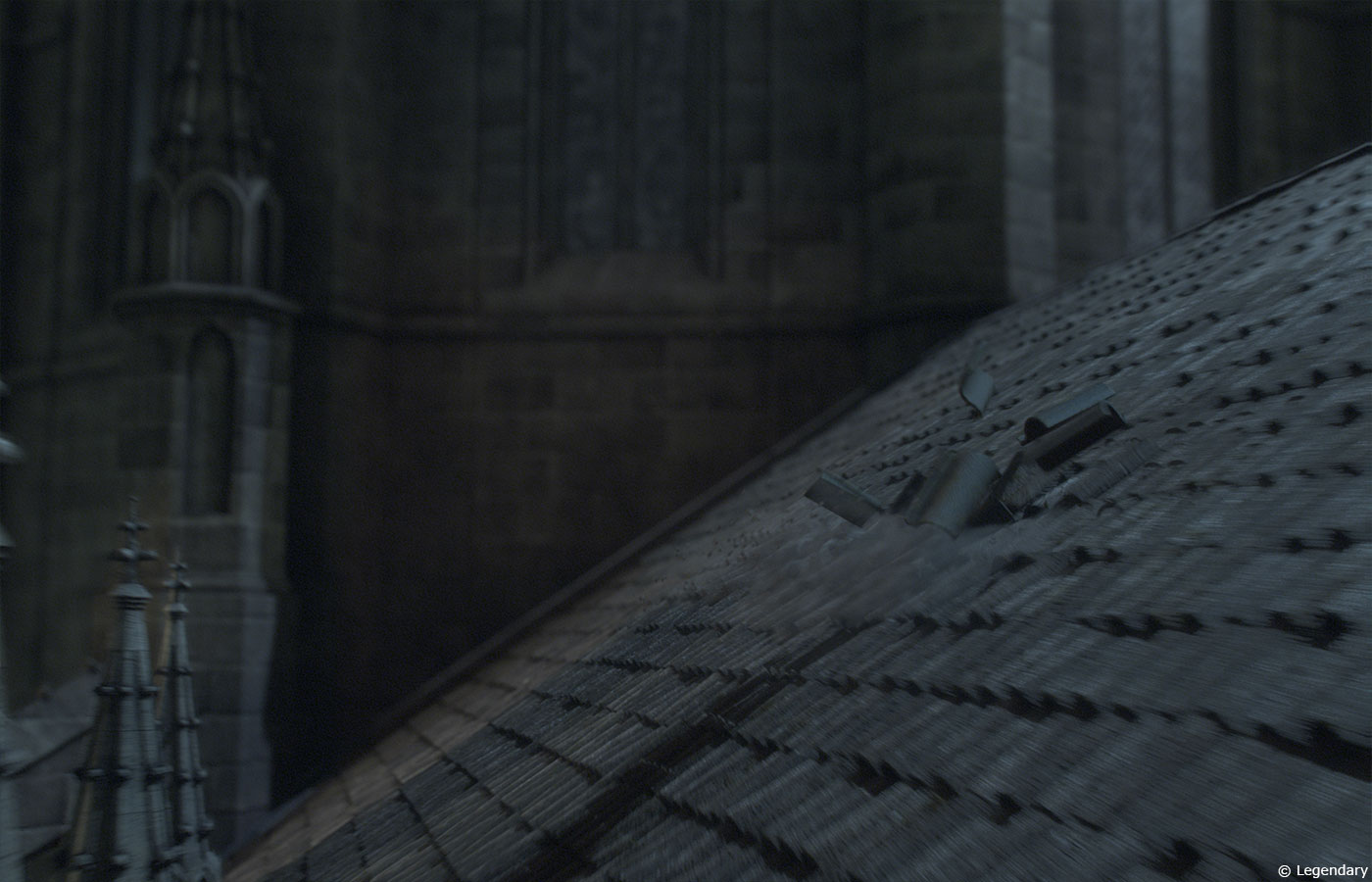 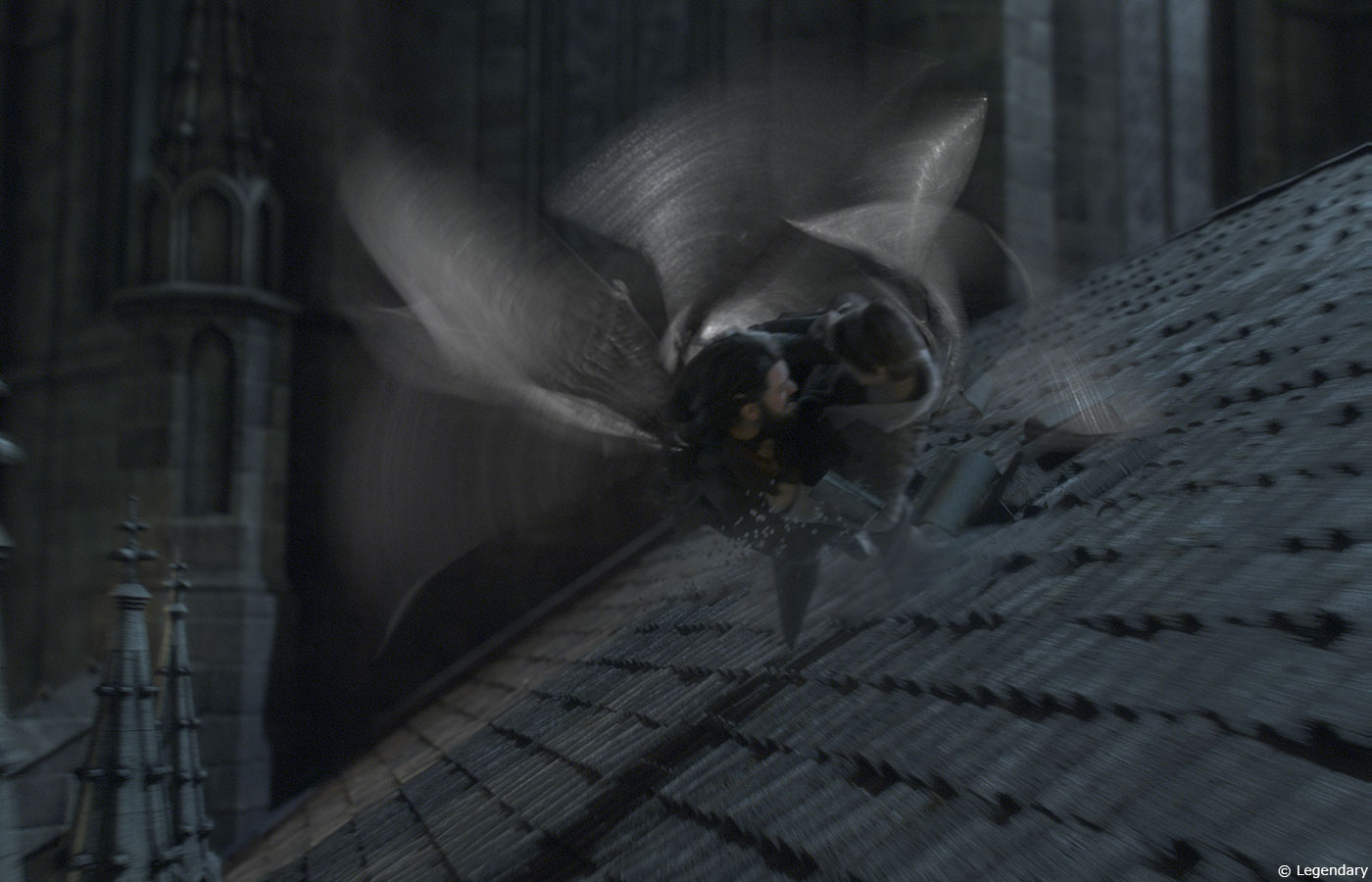 Let’s talk about the beautiful city of Burgue. What kind of references did you received for it?
Mr. X and UPP handled most of our Burgue work. We wanted to create an original city, just on the cusp of its own industrial revolution. We took a lot of influence from London and Glasgow, and of course Prague, where we were shooting. 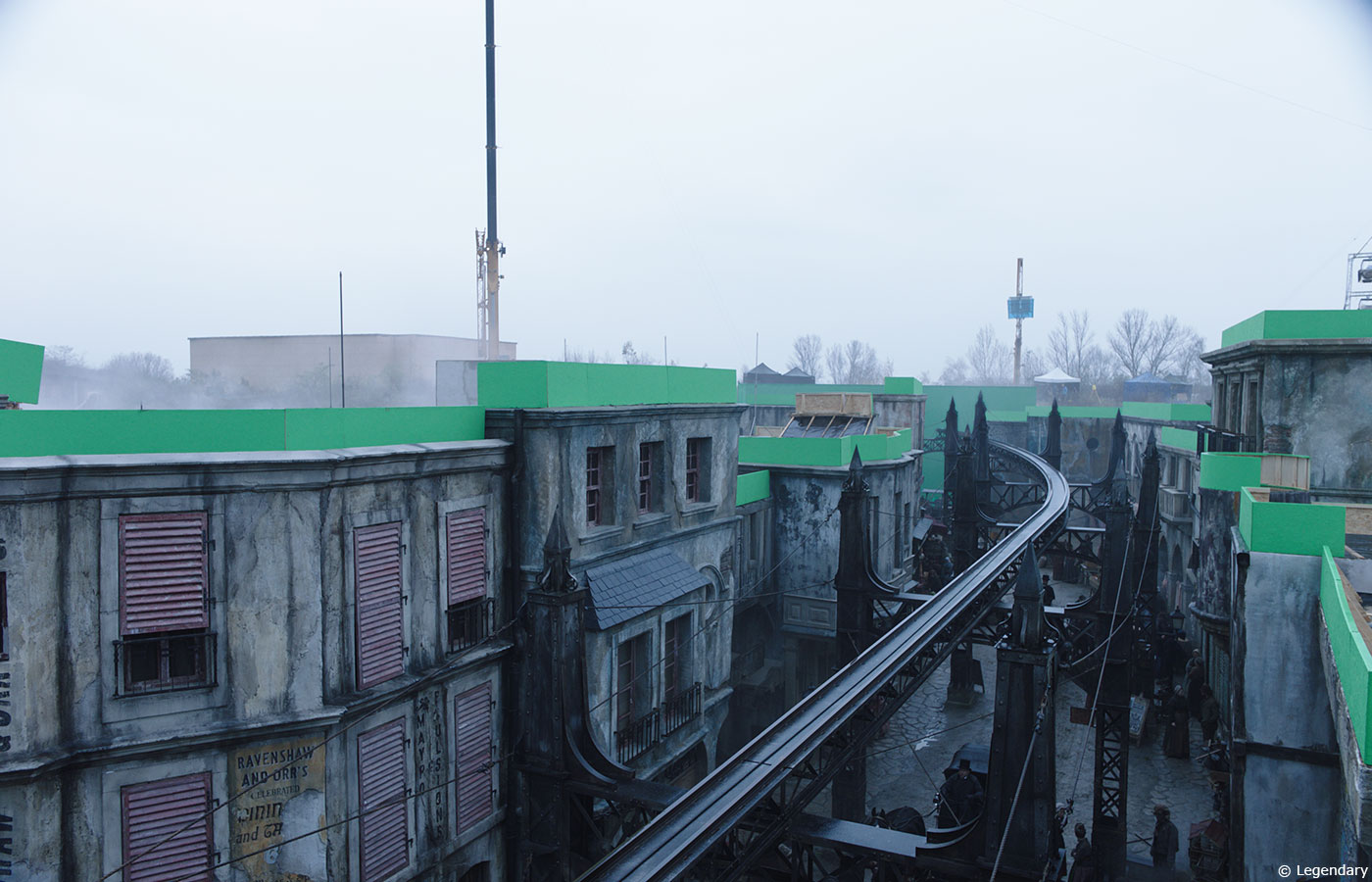 How did you create the FX for the storm sequence?
ILP did the CG water and ship for us. We used quite a bit of practical water on set. The ship’s cabin was actually on a hydraulic gimbal inside of a custom built water tank.

How did you split the work amongst these vendors?
Monsters were handled by Image Engine in Vancouver, they do amazing creature animation.

Rhythm & Hues did some wonderful creature work for us on the Kobold characters.

Pixomondo in Germany was our lead vendor for the wings. They also did environments for a big mid-air flying fight scene. They did some very difficult work seamlessly transitioning from the practical prosthetic wings to the CG ones that can move.

Important Looking Pirates in Sweden did all of the big battle scenes and world building in the flashback episode. That episode takes place in a completely different time and place from the other episodes, so we really wanted to create a different look and feel for those shots. ILP does beautiful work.

Mr. X in Toronto and UPP in Prague did a huge amount of work creating our Burgue city.

Is there something specific that gives you some really short nights?
The Darkasher was the hardest to pull off, I think. I’m really happy with how it turned out, though!

How long have you worked on this show?
I was on CARNIVAL ROW for about 2 years. 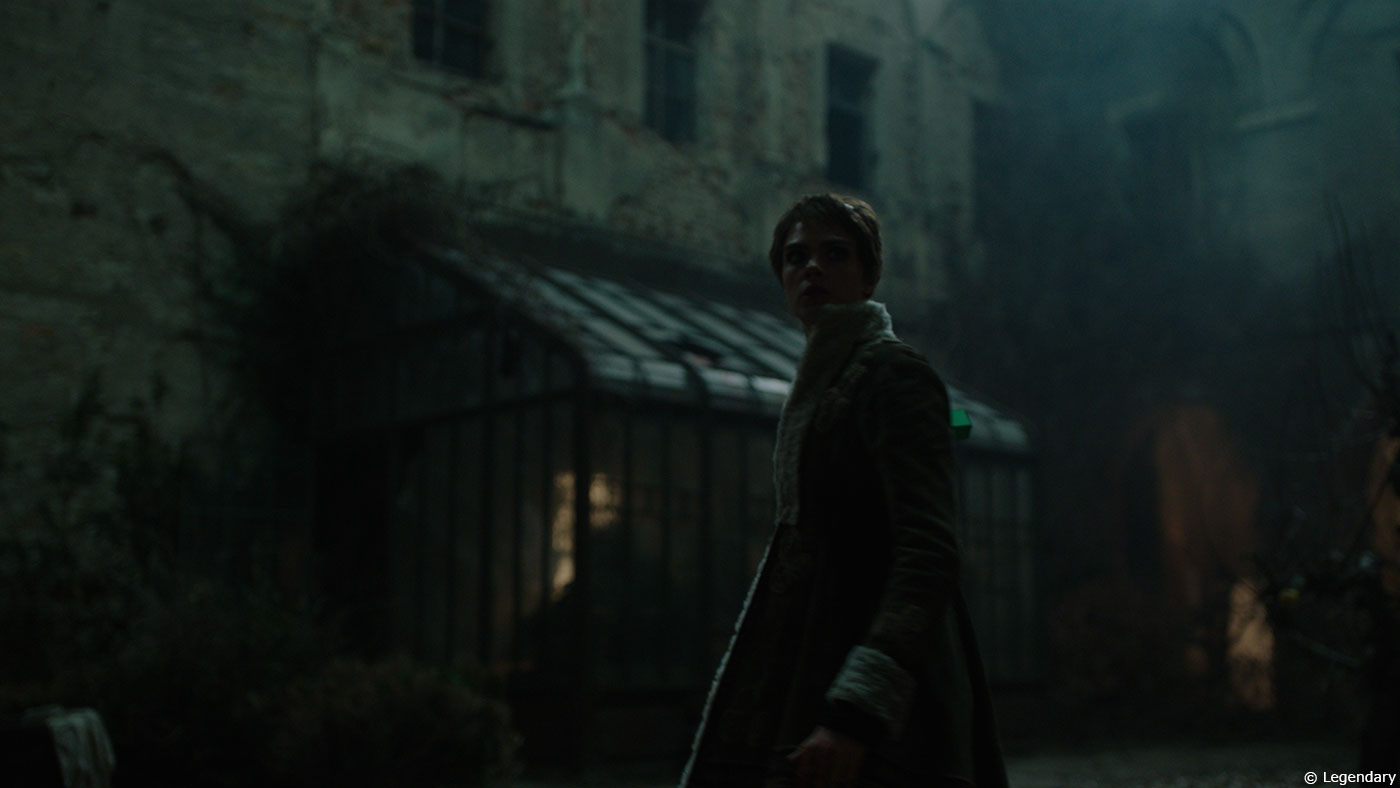 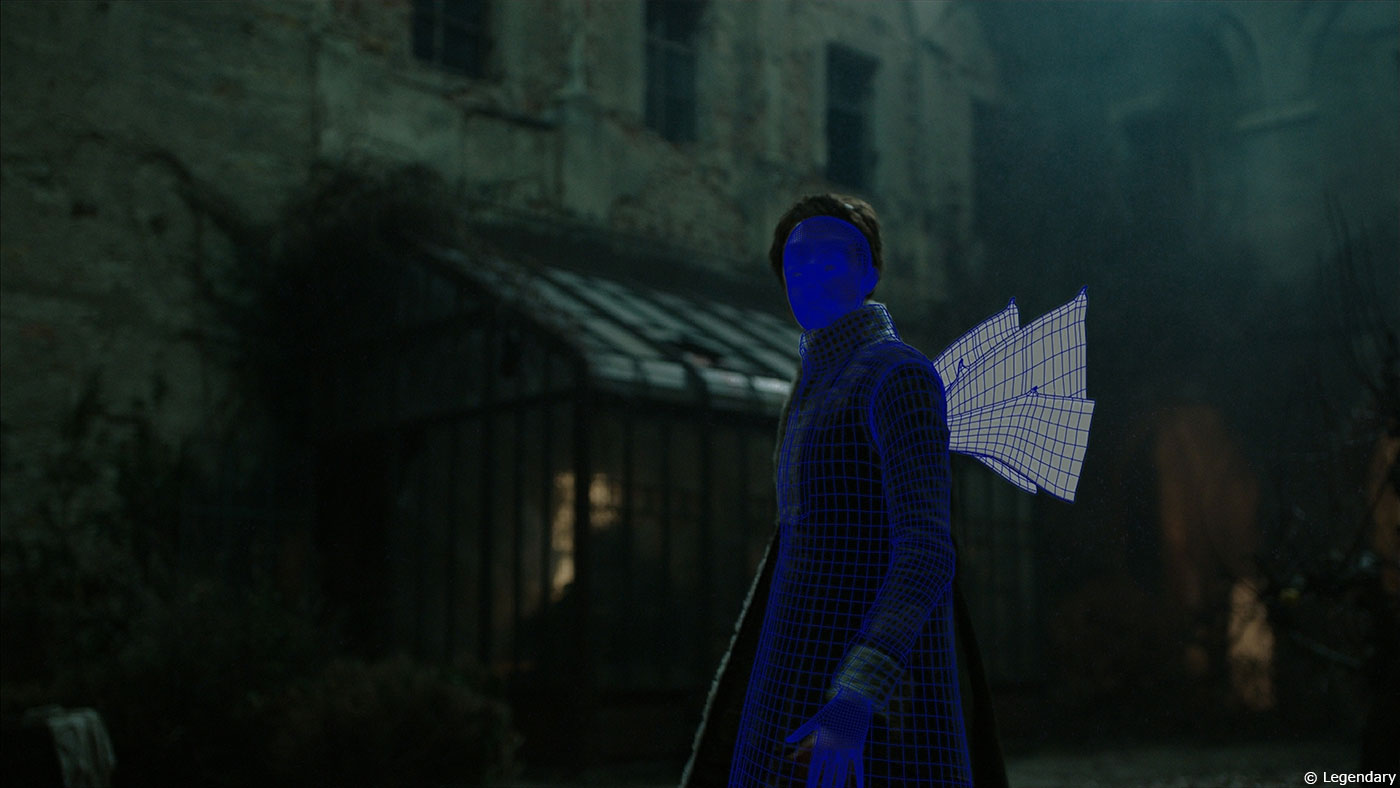 What’s the VFX shots count?
The total shot count was somewhere around 2’000. It’s hard to be exact, because shots would be added and omitted as the show took shape.

What was the size of your team?
During production I had a team of about 6, led by additional on-set supervisor Charlie McClellan.

During post the team was about the same size, led by digital supervisor Craig Seitz, and Todd Shifflett, who is taking over as VFX Supervisor for season 2. 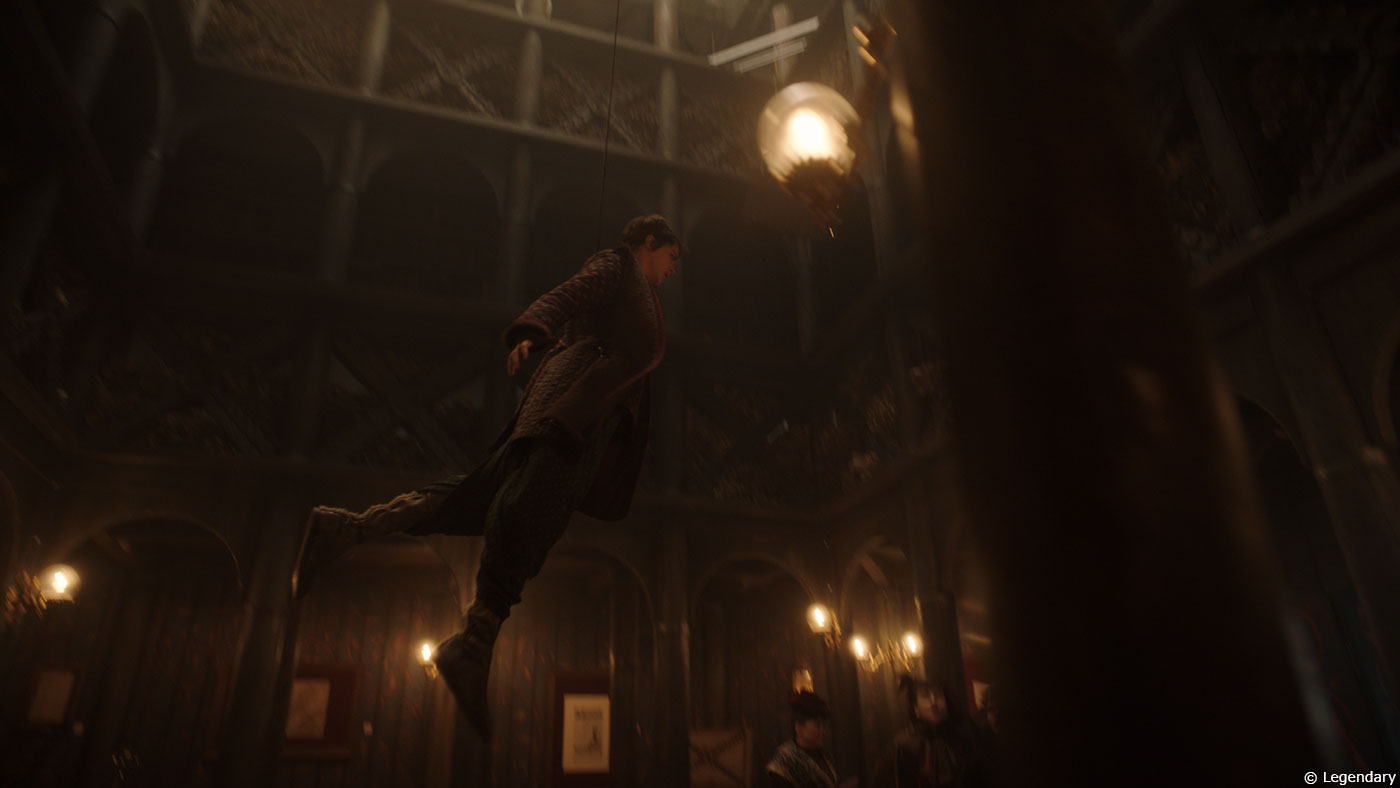 What is your next project?
I’m working on a new show for HBO that I’m very excited about. Can’t say any more than that at the moment!