Chris Wells began his career in visual effects since 17 years ago. He has worked on projects such as THE DAY AFTER TOMORROW, 300, 4: RISE OF THE SILVER SURFER or ALIENS VS. PREDATOR: REQUIEM. He then became VFX supervisor and took care of movies like 2012, THE A-TEAM or LOOPER.

What is your background?
I was an art student in college that accidentally ended up doing computer graphics in the early 90’s. Somehow I’m still doing it 20 years later.

How did Hydraulx get involved on this show?
Mikael Hafstrom liked the work out of Hydraulx and chose the facility. It all happened really quickly. I went from a meeting on a wednesday to being on set a week later for pre-production. Two weeks after that we were up and shooting.

How was the collaboration with director Mikael Håfström?
Fantastic. He is a very thoughtful director in every part of the process. An excellent communicator and an overall awesome person. I think it was the most relaxed set experience I have ever had. What was his approach about the visual effects?
Honestly he just wanted them to be as invisible as possible. It’s not a VFX movie, it’s a character/action movie.

Can you describe one of your typical day on-set and then on post?
Set was typical for VFX, a lot of standing around being bored until that moment someone really needs you. Then back to waiting for the next vfx shot.
Post, of course, was just the opposite. Start the day with reviews, work with the artist, check in with the director, work on more shots, another review, eat, sleep, repeat. 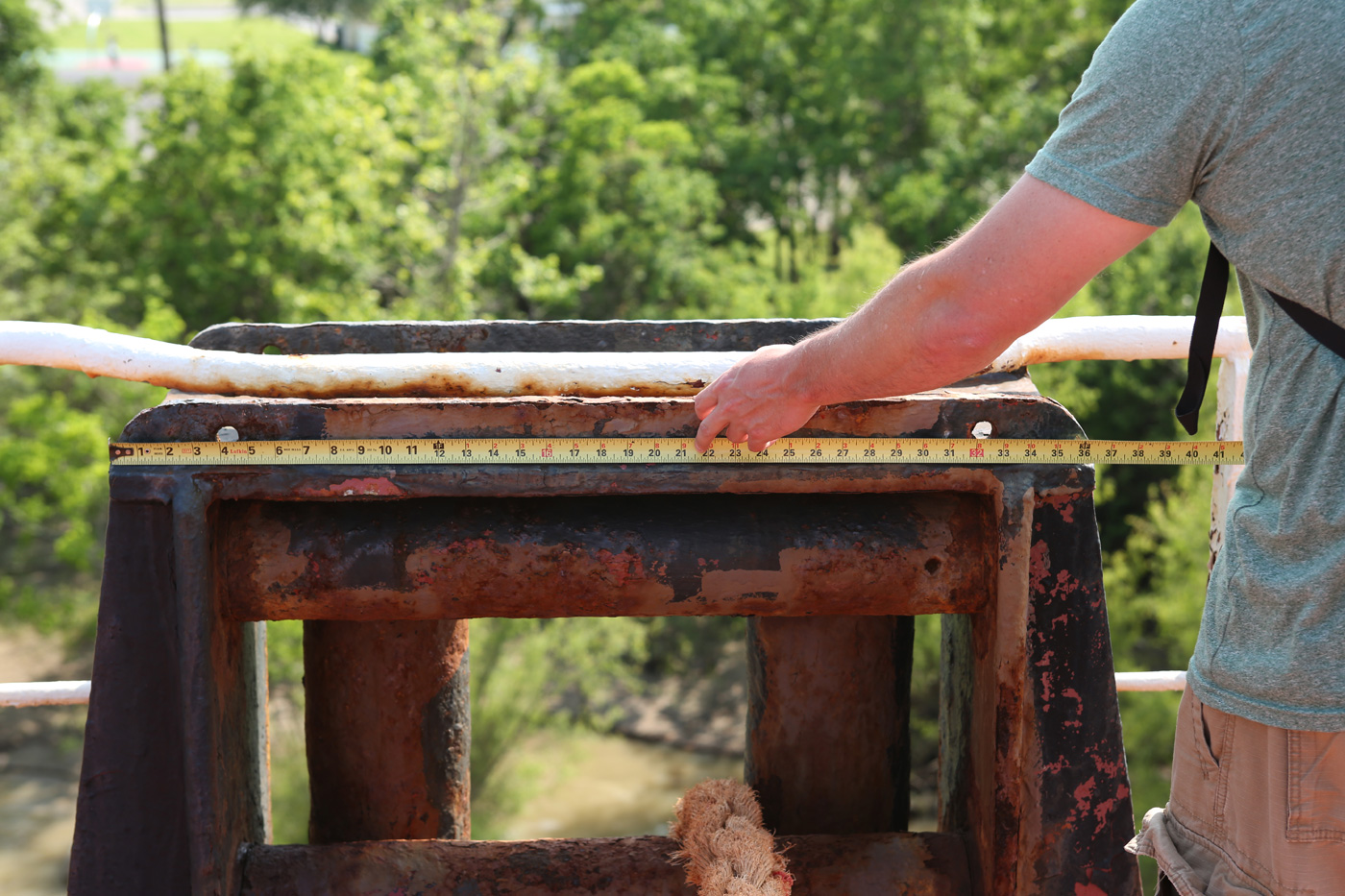 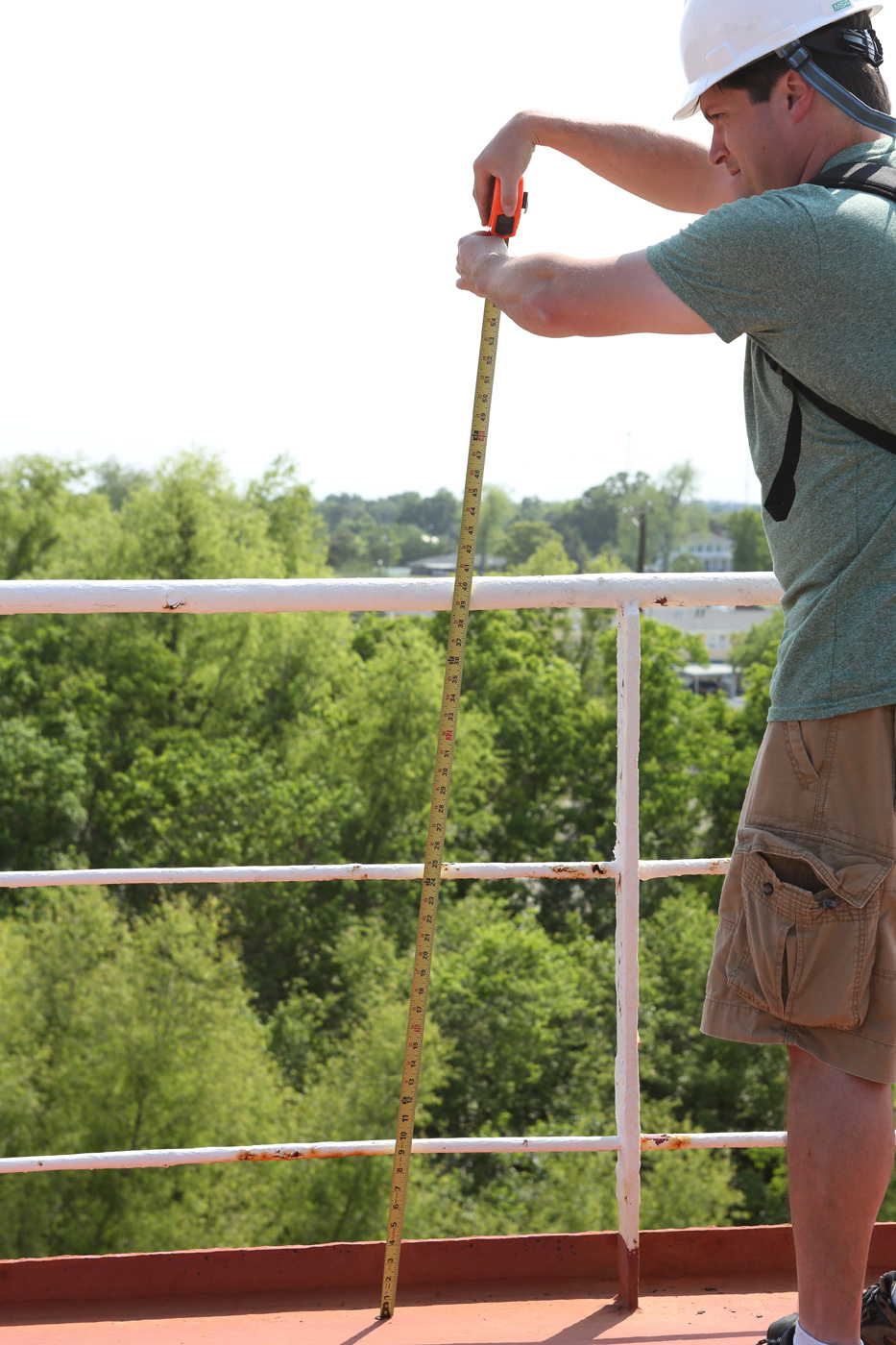 Chris Wells: « Here I am measuring everything with my on-set partner in crime Patrick Flannery. »

Can you explain in details about the Tanker creation and shooting?
One of my favorites parts do visual effects is the seamless transition from the plate to digital effect. There are several of those types of effects in the movie but the biggest challenge was the actual super tanker, The tomb. Our physical set was on a docked cargo ship on the Mississippi River. We were fortunate to have an actual ship to film on but we were shouldered with 2 giant problems. First, the ship is supposed to be 4 times the size of the one we resided on. Second, you saw New Orleans in every direction. Due to the sheer size of the ship and the inconsistent weather there was no way to screen off the background so we quickly accepted the fact that this will require a ton of rotoscoping and 2d patch work. For consistency we created a sky panorama that was inserted into just about every shot into the sequence. Unfortunately the weather seemed to change every two minutes so there was no consistency in the real sky.

For the water, we used a combination of plates filmed close by on Lake Pontchatrane and 3d water renders. While the 2d artist were fixing the backgrounds the 3d artist were given the task of creating our larger than life ship. We weren’t replacing the ship but extending it. This was helpful in areas where we only had to add a small extension to the photography but in several scenes 75% of what you see is a full cg extension. Although this was our hardest task I believe it was also our most successful. The successful integration was due to the enormous amount of details put into the elements of the shot. While on set we photographed and measured every detail of the real ship and all those parts were faithfully duplicated in the 3d model. Chris Wells: « This was our ship/set. The ship in the film 75% bigger done all in 3D. Twice as long and twice as wide. Also removing New orleans from every background was a chore. »

Can you tell us more about the Cell Blocks?
Another heavy VFX part of the movie was the cell block inside the “Tomb”. In the movie prisoners are placed inside glass cells housed in the multiple areas inside the hull of the ship. The cells occupy all spaces inside the enormous hull from the ground to being suspended 60ft high. On set we created 1 cell cluster and two specifically placed individual pods. We knew the majority of the scenes would be VFX scenes so myself and Barry Chusid, the production designer, figured out how to lay out our hero cell so that we could capture the correct eye-lines for our eventual giant prison. Chris Wells: « This is the practical portion of « the tomb » being constructed. The rest, of course, was 3D. Thanks to production designer Barry Chusid. »

The hardest part was helping the crew imagine what the final product would be when filming the scenes. I spent many hours cobbling together rough previs to demonstrate how this would all work in the end. They quickly understood, executed perfectly and it worked like a charm! Working with so much glass and so many reflective surfaces was a bit of a challenge. That eliminated doing any green screens. We draped the entire set in black and made sure no one wore anything bright. Then, much like the ship shots, we had to rely on great rotoscoping to insert several of the backgrounds through the hero glass cell. 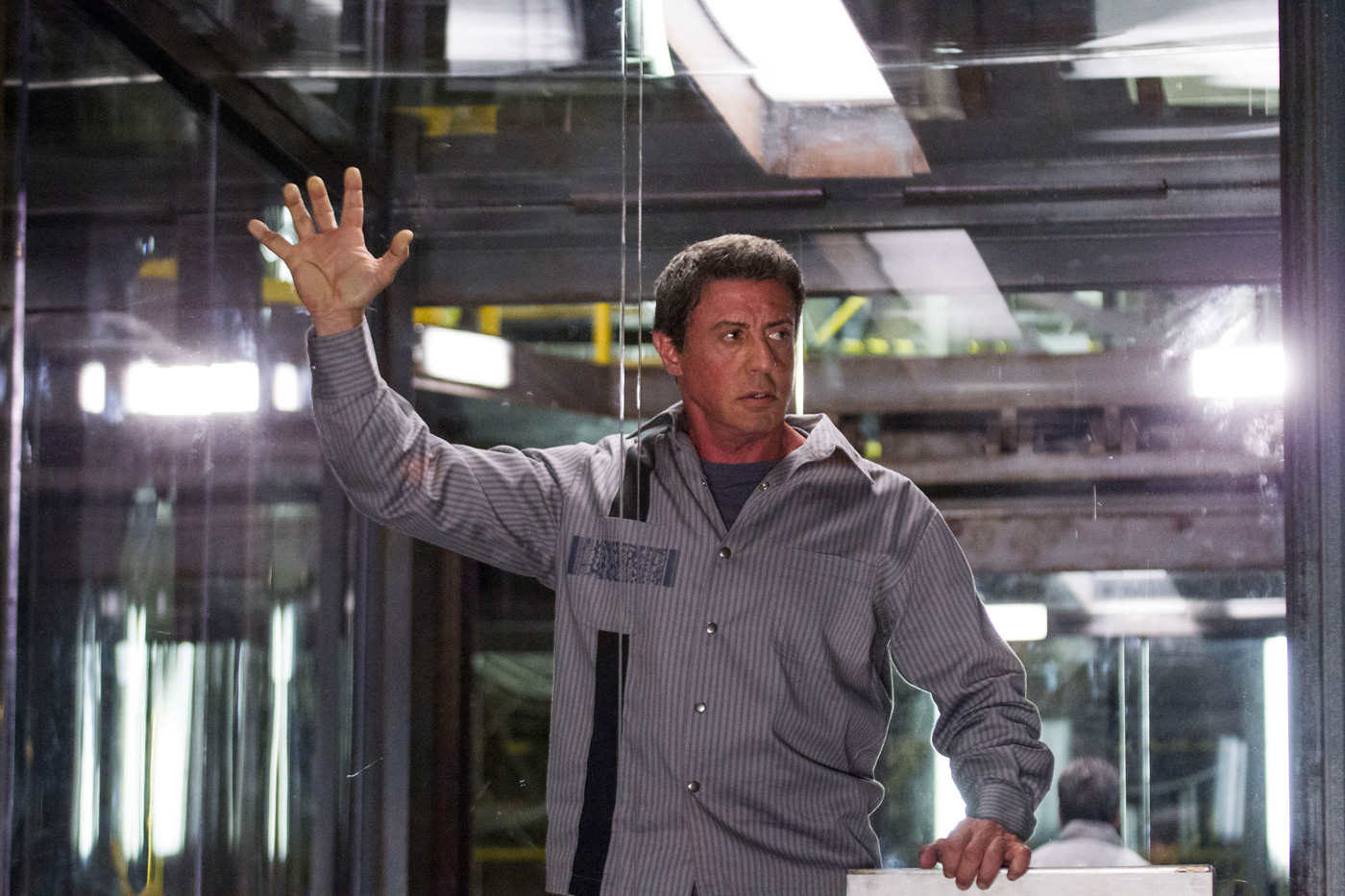 Did you enhanced the various explosions and how?
Probably my favorite part of the shoot was the first VFX day. At the end of the movie there are several large explosions on the back of the ship. We had an awesome SPFX team led by Michael Lanteri, 3 Red Epics donated by Hydraulx, and a whole lot of explosives, so we blew some stuff up! We stacked several large cargo containers on top of each other that had the similar dimensions of the back of the super tanker. We painted them flat black and set several oil containers in front mimicking what was on the back of the photographed ship. The SPFX team added several gas containers and explosions around our target barrels. During the SPFX set up, the camera crew did a 6 camera set-up including a crash camera right behind the barrels and one witness cam placed on a ‘condor’ over 80ft high. These angles were approximations of the angles needed to replicate the aerial photography off the side of the ship. We were only got two real tries at the explosion but that turned out to be more than enough elements. We did augment all of them with a bit of 3D but the base explosions were fantastic.

How did you design the X-ray view for specific shots?
Mikael wanted to keep those simple. We took the set and architectural diagrams and constructed, in 3d, the surround location and buildings. From those we just did a wire framed, blueprint-type look over the photography. Even though it is a giant departure from reality we were trying to make sure the focus still remained on Stallone’s character.

Was there a shot or a sequence that prevented you from sleep?
Yep. There are a couple shots I still wish I had more time to work on. As with any movie a couple new request came down the line and there were not small task.

What do you keep from this experience?
Many times after a production people just go their separate ways. But this show I seemed to make several friends that I am keeping in touch with. Again I think that speaks volumes to the type of crew Mikael Hafstrom kept. 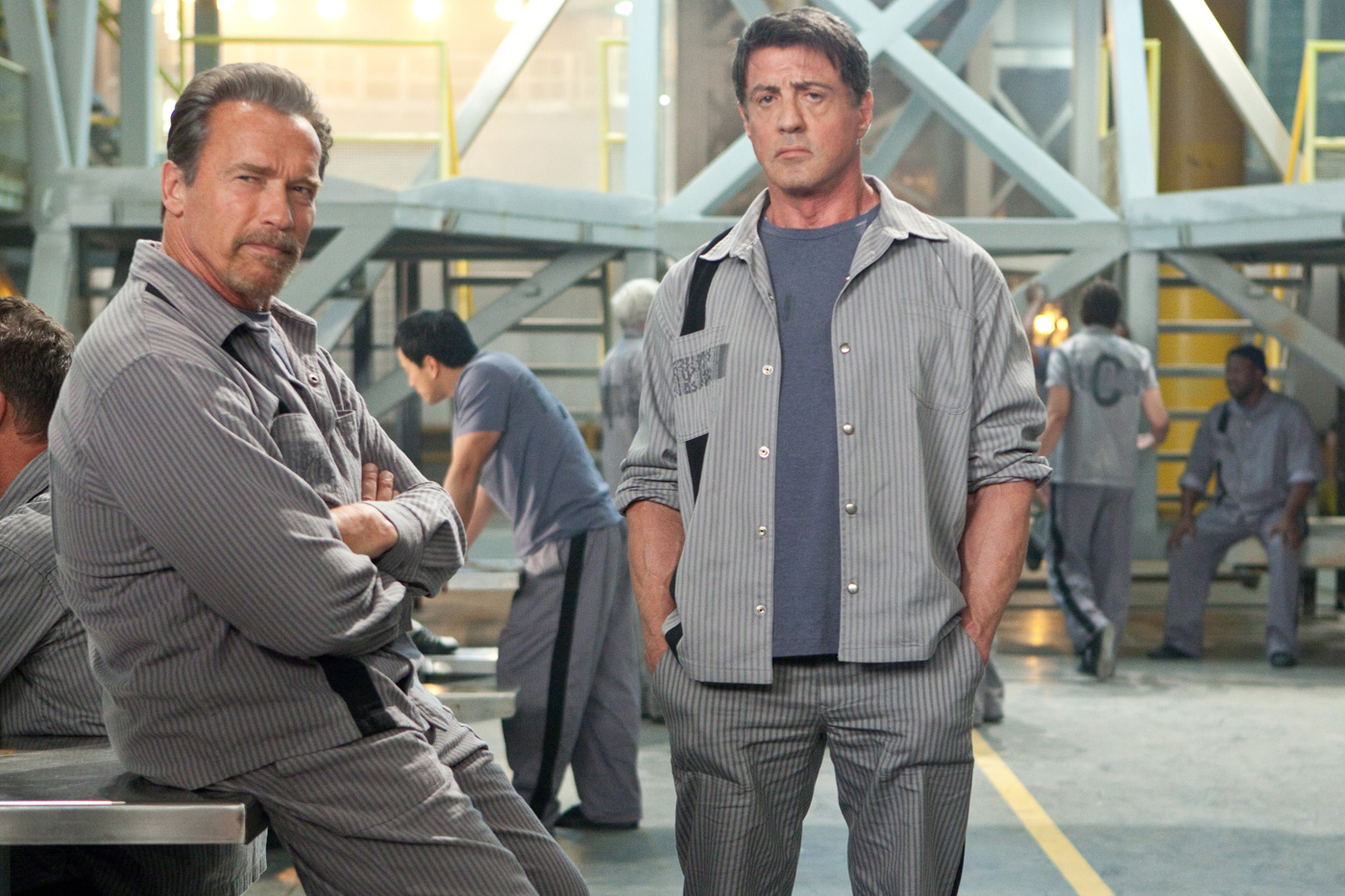 How many shots have you done?
The unofficial number is 605.

What was the size of your team?
I will guess we were about 60 with artist and support staff. Most of the crew was in Vancouver and I spent the majority of my time with the director in Los Angeles. I might have to watch the credits and count.

What is your next project?
I am currently working on a super-hero type movie right now. Something that comes out next year.

What are the four movies that gave you the passion for cinema?
Good question. Watching early experimental computer graphics is what motivated me to learn. There was the « Minds Eye » series that really peaked my interest as an artist. I still like to experiment with cool imagery, that has nothing to do with standard visual effects, from time to time.