The team of Framestore, composed of VFX Supervisors Mark Wilson and Jonathan Fawkner together with CG Supervisor Alexis Wajsbrot, talks about the challenges of this new production Marvel, DOCTOR STRANGE.

What are the sequences made by Framestore?

How did you organize the work at Framestore and amongst the London and Montreal offices?
The work was all produced by our London office.

Can you tell us in details about the design and the creation of the magic?
Mark Wilson – VFX Supervisor // One of the biggest challenges with the whole project is that nothing existed; you can’t google ‘Mirror Dimension’ and find a really good reference for it. It’s very subjective. We used the comic books as reference and also with the filmmakers to make sure that the final look was right. As the film went on, we got a real feel for the world that Doctor Strange is living in, and the effects started to flow. 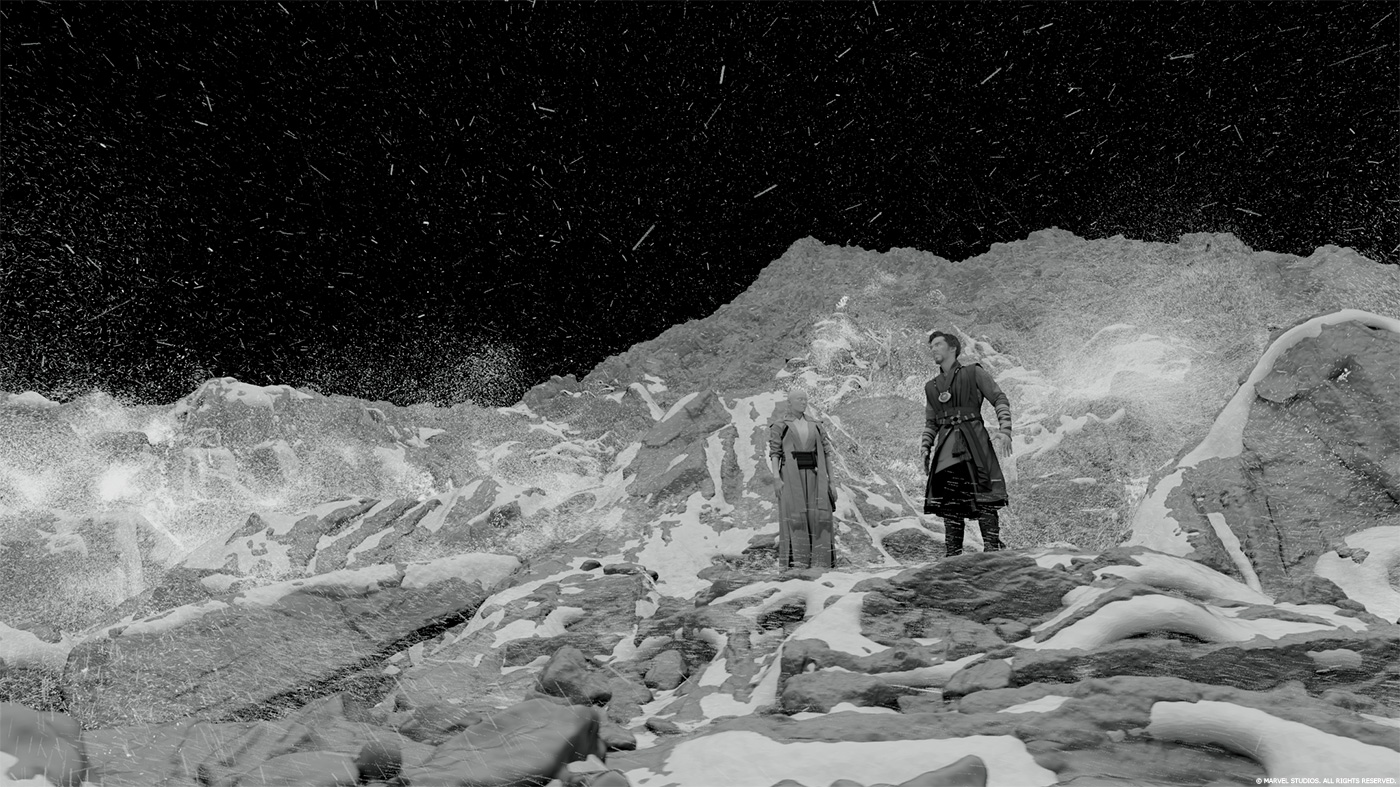 How did you manage the animation of the magic effects?
Mark Wilson – VFX Supervisor // The magic is light-based, producing sparks and energy, and uses a fiery yellow/orange colour palette throughout.

Alexis Wajsbrot – CG Supervisor // As with any form of magic, the complexity of the effect came from how subjective the look is and how much we wanted it to look real. When we started on the effect, the first concept used long-exposure photography. The reference was a streak of light from Strange and his magical whip; the sparks were also long, creating a curved flare which you can’t generate without CG. It just ended up looking too fantastical; so we kept making the effects shorter. We used a CG set-up in Houdini, to control the length, curvature and intensity of each spark, creating the desired look in each shot. The characters can change to an Astral projection forms. How did you approach this effect?
Alexis Wajsbrot – CG Supervisor // It was one of the hardest effects we’ve had to deal with at Framestore; finding the right balance of a look that was subtle but also beautiful.

Jonathan Fawkner – VFX Supervisor // One of Doctor Strange’s powers is that he can exist in another plane; what they call the ‘Astral Plane,’ and so his Astral form exists in that world and we (the audience) can see it. It’s fairly established in the comics, so it was up to us to work out how to digitalise how that should look. He is transparent and the rest of the world goes dark and therefore we see his transparency as it’s isolated, with a spectral glowing quality to it; that was the brief we were given. In the end we back-lit everything. When our characters were back-lit, you actually got a lot of negative space, which the eye perceives as contrast. It just so happens that when the character is transparent, the eye interprets both what is behind and that lack of detail at the same time. On top of that we had the FX team drive a particle system that gave the characters a slightly twinkly patina. 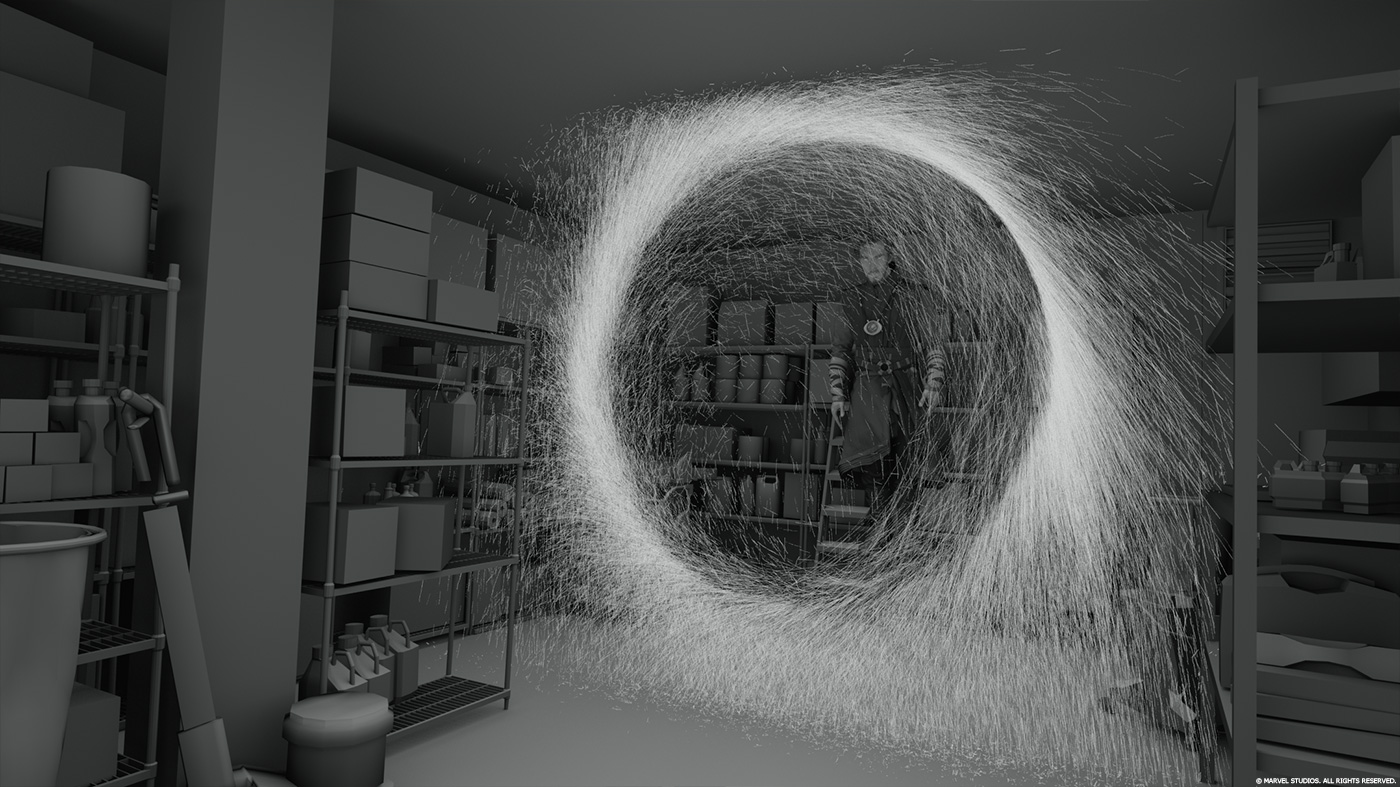 How did you design and created the Cloak of Levitation?
Alexis Wajsbrot – CG Supervisor // We use N-cloth at Framestore. But we needed to enhance our method with the cloak. We used the Marvelous Designer programme which models cloth based on a real pattern. We worked closely with the costume department on-set, in order to get the measurement and patterns of the cloak and cloth for every character. We had a very dedicated modelling team led by Nicolas Leblanc who were all passionate about taking the cloth to the next level. Doctor Strange’s costume was made out of more than a hundred patterns. We also groomed cloth fibres on the cloak to give it that added level of detail. Can you explain in details about its cloth simulation and animation?
Mark Wilson – VFX Supervisor // Normally if we were making a CG cloak we would just simulate the cloth, but this cloak needed to be directed; it is it’s own character. So the animators animating the cloak could see simplified dynamics in their scene to get a good representation of it. After animation, the CFX department started work on the dynamics of the cloak to ensure that the desired levels of realism and gravity were achieved.

There is a big action sequence inside the Sanctum Sanctorum. Can you tell us more about your mandelbrotting and destruction work?
Mark Wilson – VFX Supervisor // The effect was quite difficult to nail down, as to how far we should go with it, especially when our live-action characters had to be integrated within those scenes. There’s the whole set bending and moulding, cloning and reconfiguring itself, but then there’s also the Mandelbrot pattern, which is the mathematical formula that creates these crazy patterns and the fractured world aspect to it. Once we had animated all of these assets, our FX team then placed additional Mandelbrot sponge fractal patterns inside it, using Houdini to drive a proprietary Arnold procedural iso surface shader at render time to give us a mathematical organic growth that was really cool. That was all new to us! Can you tell us more about the Crimson Bands of Cyttorak?
Mark Wilson – VFX Supervisor // The shot that has the Crimson Bands of Cyttorak was really cool to see come to life. Doctor Strange is led by his cloak to a metal cage which becomes a full-body handcuff and latches around Kaecilius and controls him; he falls backwards and locks into position. For that entire shot, Kaecilius is completely CG, along with the crimson bands that are wrapped around him. It looks completely photo real. 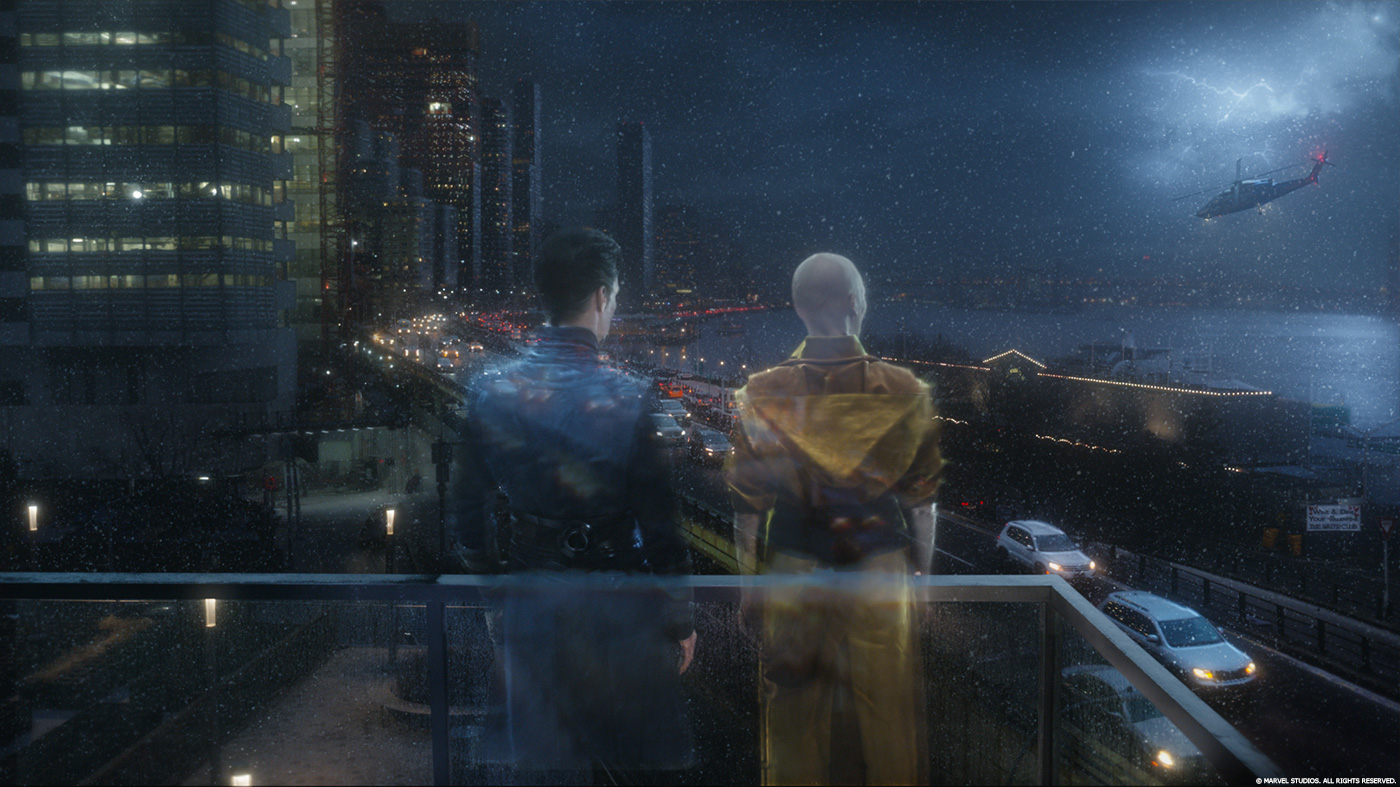 How long have you worked on this film?
Framestore worked on the film between October 2015 to September 2016.

How many shots have you done?
Over 365 shots in total.