In 2017, Jay Barton explained the work of Digital Domain on THE FATE OF THE FURIOUS. He talks to us today about his work on AQUAMAN.

How did you get involved on this show?
Warner Brothers has always been a great partner to Digital Domain and they contacted us to create a particularly complex sequence for AQUAMAN.

How was this new collaboration with director James Wan and VFX Supervisor Kelvin McIlwain?
The director James Wan was dedicated to the pursuit of making the best possible version of this film. His creative process pushes for quality. Working with Kelvin was wonderful and seamless as we had worked with him before and had an established shorthand.

What were the sequences made by Digital Domain?
We worked on one sequence which was the Dead King’s Island environment. This was where the heartfelt reunion between Aquaman and his mother takes place. Can you explain in detail about the design and creation of this massive environment?
The director wanted this to be the coolest thing the audience had ever seen. The production team found some interesting photos and pieces of artwork that captured the mood of the environment. This led to the creation of many 3D environment pieces combining rock, crystal and vegetation elements which were used to create a 3D space. They stressed that color and magic come through as much as possible. To achieve this we incorporated rainbows and light flares which is usually shied away from but in the context of this fantastical film it was applicable. How did you create the vegetation?
Most vegetation was created in SpeedTree and exported with animation cycles. Additionally, some of this was created as matte painting.

How did you handle the lighting challenge?
Lighting in this environment was provided by crystals that hang down from the ceiling of the underwater environment. The primary light source is technically the sun but that light is being filtered down via these massive crystals. Most of the set photography was shot in overcast conditions that allowed for such a broad lighting condition. The few that were sunnier were a challenge as we had to do paint work on ground shadows to diffuse them a bit and de-contrast areas of the plate to fit the surrounding environment. 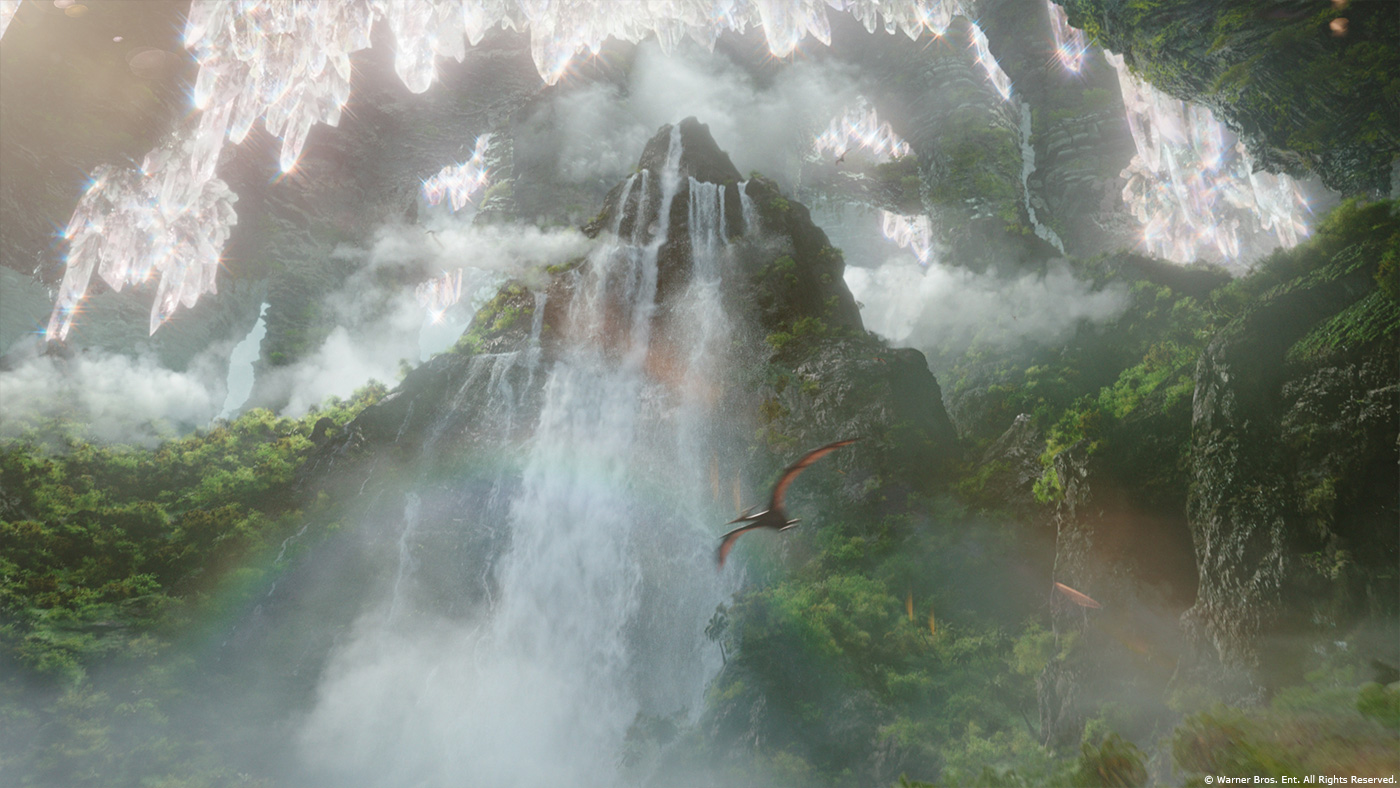 The environment is full of waterfalls. How did you handle so many simulations?
We used a mix of 3D and 2D solutions. Most of the foreground waterfalls, as well as the tall one from the central mountain, were simulated in Houdini as they needed specific interaction with the environment. We also have an extensive library of shot FX elements. Many of the smaller BG waterfalls were added using practical elements of things such as pouring salt and glass beads.

Many dinosaurs are in your sequence. Can you tell us more about their creation and animation?
We received the dinosaurs and pterodactyls from other studios on the show. There were many shared assets between vendors on this show. The Dinosaur models and textures were provided by another vendor which we adapted to our pipeline and rigged for keyframe animation. We wanted to use the Pterodactyls to really help sell the enormity of the space as well as add more life to the distant NG imagery. Which sequence or shot was the most complicated to create and why?
Aquaman’s POV when he first comes out of the water in this new environment was the most complicated. We had a lot of story to try to tell as an intro to this world and it was also the first shot we tried to develop within the world. It also happened to be the last shot we delivered due to its complexity.

What is your favorite shot or sequence?
I love the three shots looking back at Aquaman right after he pops out of the water. We created an intimate space that still matched the larger environment that he interacts with.

How long have you worked on this show?
Roughly 10-12 weeks.

What’s the VFX shots count?
19 shots in a standalone sequence.

What was the size of your team?
About 50 artists.