In 2014, Philippe Rebours explained to us about the work of ILM on NOAH. He then worked on visual effects on AVENGERS: AGE OF ULTRON.

How did you and ILM get involved on this show?
ILM had previously collaborated with Luc on LUCY and it was a terrific experience so when he let us know the his next project would be VALERIAN we were really excited. Being a huge fan of both Luc’s visionary work and the original French comic book series, I jumped at the chance to work with him on the project.

What was your feeling to help bring to life such an iconic character as Valerian?
I was excited but also a bit scared by the scope of the work. If you’re not a little scared going into a project there’s a good chance you are not going to pushing any boundaries.

How was the collaboration with director Luc Besson and VFX Supervisor Scott Stokdyk?
Luc and Scott are both great creative partners. Luc is very collaborative and knows exactly what he wants but at the same time is open to allowing individuals to bring their own ideas to the table. His directions are clear and concise which is immensely helpful. Scott has been a great partner as well, he has a way of getting the best out of his team. He is very supportive, knowledgeable and always communicates well. Having a view of the entire project, he would always send us off in the right direction, fully aware of what Luc had asked of the other vendors.

What are the sequences created by ILM?
Our work focused on two primary sequences – The ‘Big Market’ sequence, Valerian and Laureline’s first mission where they have to get the Mulan converter back, and a second sequence where Laureline has a creature over her head and is able to see Valerian’s memory, as well as a small environment while on Alpha Station.

How did you organize the work at ILM?
The Big Market sequence is based on two worlds – Kyrian and Big Market. Kyrian, a desert planet defined by tilted colorful rocks and a blue sky with colored clouds lit by a very broad sun. After defining the look at ILM, we partnered with Hybride in Montreal to execute these shots.

The second world is the actual Big Market with a purple sky and a canyon 500 floors deep. As he is being chased, Valerian goes through different areas of the market. Each area was treated at ILM Vancouver like its own set. Our production schedule was based very much on when the set would be delivered by our generalist department.

How did you work with the art department to design the planet Kyrian and the Big Market?
Luc had a lot of artwork done prior to the shoot, and we received all the pieces he liked for one reason or another. During the first turnover, we went through them and he told us what he liked in each one of them. Internally, our visual effects Art Director Bianca Draghici with the help of Christian Alzmann created a visual bible of sorts, using photos as references of elements and color palettes that we thought would work well within this world.

Can you tell us more about the creation of the planet?
For Kyrian, Luc’s artwork had the colored rocks. For the sky, he sent us an image from an advertisement that had those colored cumulus and he said he was particularly fond of. Based of these references we created a library of clouds seen from multiple angles and different colors so we could art direct the sky on a per shot basis.

For the Big Market, once we had the bible and all the artwork, we started building various elements – specific stores but also generic ones, windows, doors, awnings, tables, props, everything to set dress our virtual stage.

This planet had what could be described as a cartoonish visual style. How did that affect your work?
Part of our job is to understand the director’s vision and interpret that vision in the visuals we create. Early in post production, by presenting images, you start the conversation on what kind of visual language the director wants to use. In the case of Valerian was very important for Luc that the planets do not look like Earth. He also likes ’round’ shapes, saturated colors, and a thin atmosphere with very little haze in the background. All of this lends to his unique stylized look.

We discover the huge size of the Big Market in a long continuous shot. Can you explain the creation of this shot?
We started this shot fairly early in our schedule having received an animatic as a starting point. We then changed the camera path to be able to fit the beginning and the end that were based on two elements that were shot practically on set. First, we started with a fairly simplified geometry that we augmented procedurally, then we continually added more and more details, manually set dressing the frame using our library of elements created for the show that was growing daily.

How did you manage the rendering of this long shot?
To achieve this shot we relied on the power of Isotropix Clarisse. It excels at accepting a massive amounts of geometry, and then it’s a question of scheduling the renders and on the backend, managing the amount of cores you use to render it.

The Market is full of people. Can you tell us more about the crowd animation?
The same way we had a lot of artwork for the environment, we received a lot of artwork that representing the different type of aliens that could be seen on this planet. Some of them were taken directly from the comic book others were new creations. Our modeling and texturing team had great fun creating all of the different species. Some were bipeds, others were quadrupeds, and some simply floated. Some were simple geometric forms while others were more complex. Each species had artwork, but we wanted to have more variations in the costumes. Luc gave us a lot of freedom, each artist was assigned a species and suggested costume and material variations for what their unique wardrobe would be. Meanwhile, we did a motion capture session to give us some general movement of tourists window shopping, those speaking with merchants, etc. Based on this motion capture, we then created stand-alone vignettes, each a thousand plus frame animations containing groups of aliens.Those vignettes could then be placed wherever we wanted in the shots. When a character was getting closer to camera, we would switch it to hero animation and create a very specific action for the shot.

For the human tourists, Luc had extras on set, so we took photos of them and used those as reference for the look of our CG human crowd that Hybride built. Which one was the most complicated to create and why?
We have the background characters, like extras in live action, and then we have our main characters: Igon Sirrus, his guard?, DA and his mother, and of course the Megaptor that chases Valerian and Laureline in the desert. Igon is our main character that has the most dialogue. John Goodman provided the voice performance. Igon is fairly… heavy. I wanted to be sure that the skin moved properly. So we implemented a muscle system on his body but also on his face, to get some secondary micro animation. We used crabs and turtles as references for the Megaptor skin, with areas that would be strong and rigid, like a shell. It also has long spikes. But it has to move his six legs freely, so we added a fair amount of controls to be able to move the different shell like tiles and spikes. Also, since the tiles are not just on top of the skin but part of the skin, we modeled wrinkles that could be hidden under the tiles and when the tile was moving it would reveal the skin that was underneath. 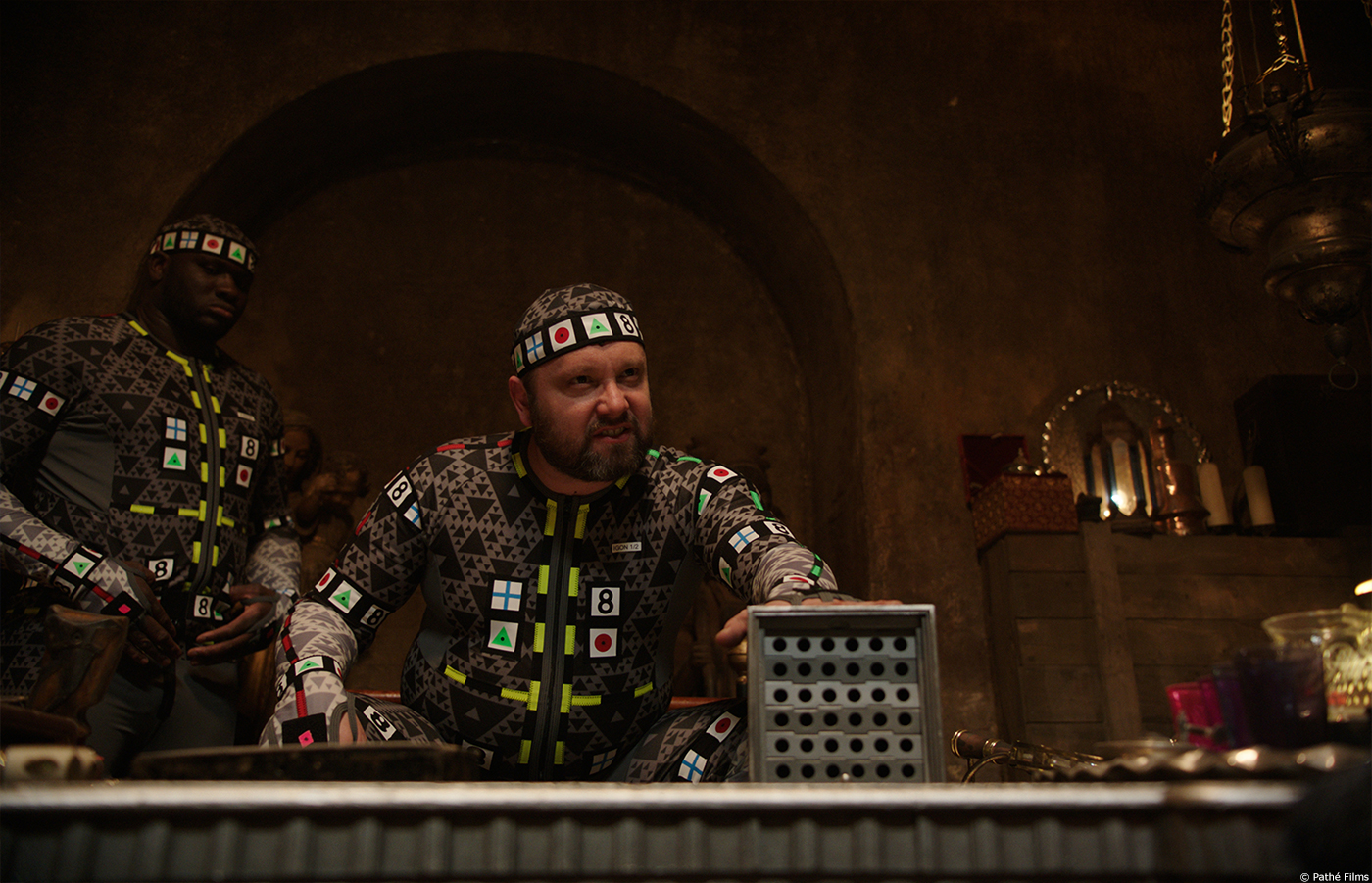 The action moves constantly from one dimension to the other. How did you handle this challenge?
This is the beauty of editing. Luc shot the entire sequence with his school students. He edited it, added sound and defined which world we would see in each shot. Then on set, the action that was supposed to be on Kyrian was shot on the set that had the sand. The rest was shot in the fully blue screened environment.

Did you received specific indications and references for his animation?
Yes, we invited Dr. Stuart Sumida, a biology professor at California State University, to come give us a talk on how various animals move based on their skeletons. It was extremely instructive.

Based on the Megaptor’s physiology, Cedric Lo, our animator supervisor, settled on a mix of hyena because they generate power from their front limbs and English bulldog because of their unique posture.

How was simulated his presence on-set for the framing and the interactions?
Luc is quite skilled at framing without reference, so we actually didn’t have any for the Megaptor. For Igon Siruss however, we made a cardboard representation of his upper body so we could place it behind the desk and allow Laurent Ferraro, the actor performing him on set in our Imocap suit, to be positioned at the right height.

The Intruder comes to rescue the heroes. Can you explain in detail about its creation?
Rodeo FX modelled the Intruder, and it was sent to us. Because some of our shots focused on the closer part of the spaceship, we up-resed it here and there as necessary. The model is based on the design in the comic book. What was the main challenge on this show and how did you achieve it?
The main challenge was the really the variety and volume of effects work. The sheer number of different creatures, the amount of assets and props that we had to create to populate the different streets. Fortunately, I had a great crew and a fantastic production team led by our visual effects producer David Fox and our executive producer Gretchen Libby.

What is your favorite shot or sequence and why?
There’s too many to name one specifically.

What is your best memory on this show?
Seeing Luc operating on set was a great experience; when he came to visit ILM Vancouver and would interact with the crew, that was a great memory as well. Overall, I think the team had a great time on the show, I know I did.

How long have you worked on this show?
Just shy of 2 years.

What is your VFX shot count?
ILM was responsible for 585 shots.

What was the size of your team?
About 250 people.

What is your next project?
I can’t say just yet.