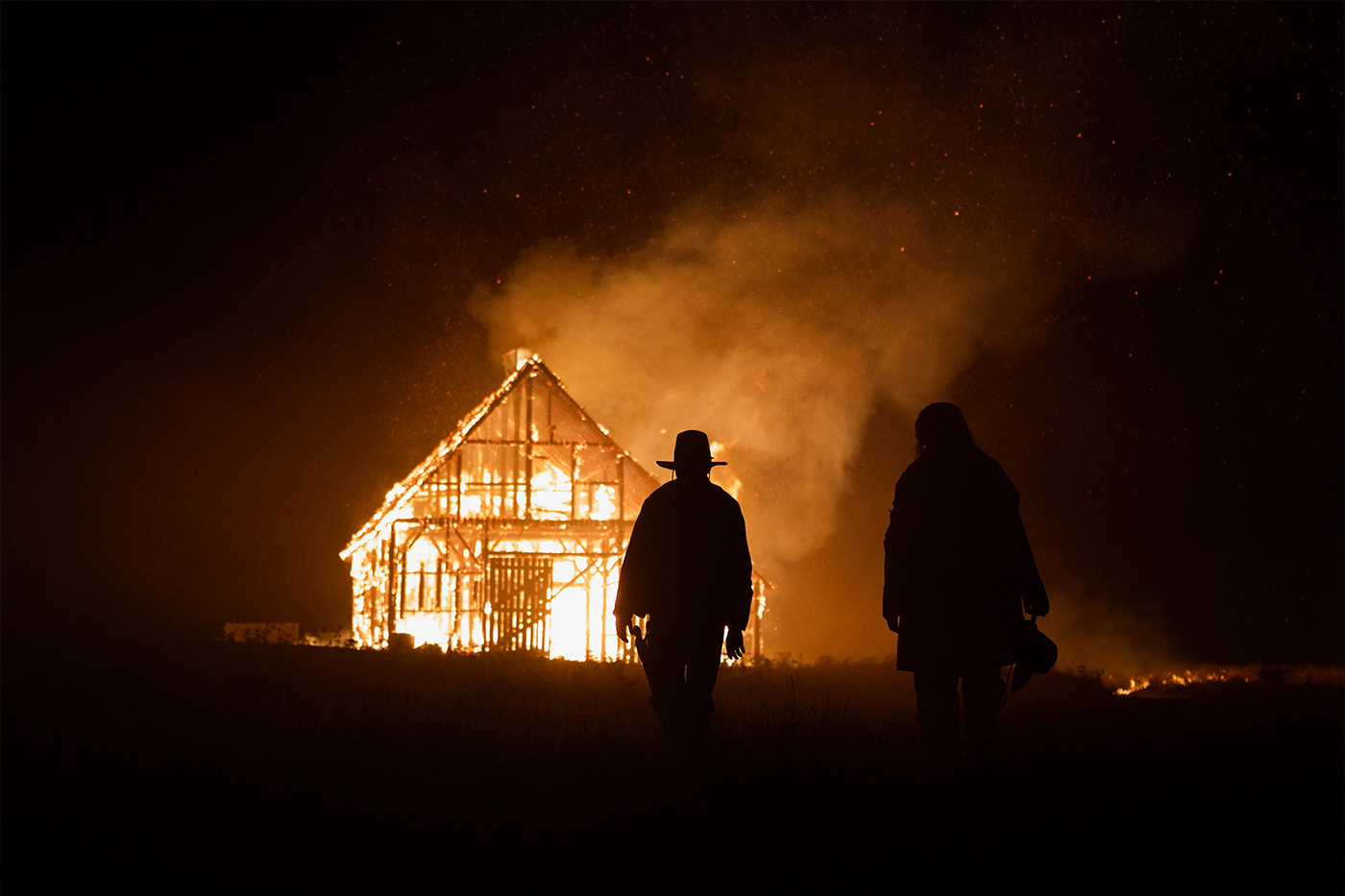 Stephane Thibert began his career in the visual effects in 1996 at Fantome Animation. He then worked in many studios like Sparx and Mathematic Studios before joining Mikros Image in 2007. He has worked on many projects such as RUST AND BONE, VALERIAN AND THE CITY OF A THOUSAND PLANETS and SEE YOU UP THERE.

What is your background?
The supervision team consisted of 3 people that already had worked together on RUST AND BONE: Cédric Fayolle was the VFX Supervisor, Guillaume Pondard the 2D Supervisor and Stéphane Thibert was the CG Supervisor. They all have worked for Mikros for years – Cédric and Guillaume have a great experience in feature films and Stéphane mainly worked in commercials.

What was your feeling to work again with director Jacques Audiard and to work on a western movie?
It’s a great pleasure to work for the third time with such a talented director and were all very excited when Jacques told us about the project. Western movies are part of the cinematographic history in America and we all grew up with those images (the landscapes, the gun fights,…). As an European studio, we rarely have the opportunity to work on a Western so we were all looking forward to it.

How was this new collaboration?
Compared to the previous work with Jacques, there were more shots to deliver, a lot of different types of effects and bigger challenges. The previous experiences showed us that Jacques really knows what he wants and that he’s very precise.

What was his biggest change with the approach of the visual effects?
Since RUST AND BONE, Jacques was really confident with our VFX supervisor Cédric… So, in fact, the approach didn’t change that much 😉
On RUST AND BONE, Jacques Audiard used the VFX as a narrative element. At that time, we decided to let Jacques do the shots he wants to tell his story and to keep the technical issues for the post-production. We do not interfere. Since this experience, Jacques is really confident with our VFX supervisor. How did you organize the work with your VFX Producer?
On this project, we had the most valuable thing for VFX: TIME! So, we managed a pretty small team of talented people instead of a big one.

How was split the work amongst the Mikros Image offices?
There was no split. The whole thing was done in Liège (Belgium), even grading.

Where was filmed the various locations?
We started to shoot near Almeria (south of Spain).
We finished in Romania near Bucharest mostly.
There was also a sequence shot in France near Lacanau.

Can you tell us more about your work on the set and environment extensions?
The art dept did an amazing job… We relied on it!
They did almost everything. We had to « extend » their work on a few shots only. But even for this, we relied on Art dept research & Preproduction work. For San Francisco shots for example, the street was too big to be handled directly on set.

The movie opens with a beautiful gunfight seen by dark night. Can you tell us more about your work on it?
Benoit Debbie (the DoP) did some multi exposure shots to ensure that we have enough material.
We used a torch light on set to create different light incidences and mixed the different passes according to the editing. Philippe Frère, one of our Nuke experts, managed all of this to achieve the result 😉

How did you create the beautiful shot with the horse on fire?
The horse was REALLY in flames!! I’m not joking 😉
But to accept this, the horse needed a rider. So, our work was to remove this rider and extend the fire.
Clément, another of our Nuke artist team, did this. The horse was not in danger at all (neither the rider)… of course! Later in the movie we discover San Francisco. How did you create this environment?
The environment was handled in a standard approach: asset creation (lots of Substance painter / Zbrush). The CG extensions were mainly based on picture references delivered by the art department. Lighting (Julien Pernes ) was done in Arnold and compositing in Nuke (Barthélémy Beaux).

The crowd was entirely handled in Golaem and we had to be careful about the historical references for the costumes. The main challenge was to match the CG crowd to the real one as they were pretty close to each other.

One of the heroes’ horse has impressive wounds. Can you tell us more about that?
That was the tricky part – the tracking was hot as hell… but Yvan Galtier did a damn nice job. Then we replaced the horse’s face by our CG one. The wound needed to be worse and worse… so we managed the evolution with different models. Alban Lelièvre did a full muscular rig to match the real one.

The heroes are using a chemical solution to find gold. Can you explain in detail about the design and creation of this FX?
It was done with lots of love (and lots of rotoscopy). The sequence was mainly done in compositing. Lucie Bories was in charge of that one. This sequence was different from the others because it was the most artistic / creative type of effect that we had to do in the movie. And visually speaking, the most abstract. We started from zero so first we had to find the general look of the chemical solution spreading in water. We needed to find a balance between something that has a credible behavior and in the same time a little bit of magic due to the narrative context. Then, we had to work with the entire sequence which starts with nothing in the water. The effect goes crescendo and becomes more and more visible. The overall difficulty was to get a correct tracking and the illusion of lights coming from underwater.

Like every western movie, there are lots of gunfights. How did you enhance the gore aspect?
Muzzle flash and dust / wood / rocks impacts were done in Houdini then comped in Nuke. The main “gore” shot of the movie that we’ve craft consisted to do an exploding head after a close-range gunshot.

The exploding skull and the brain were done in Maya/Arnold and we combined it with blood bursts stock footage in Nuke. There were several other shots in the movie that enhanced the gore aspect. Most of the time we added blood bursts in Nuke. There was also the arm amputation with a saw where we had to replace the blade with a really cutting one with blood on it. Not for the weak hearted! 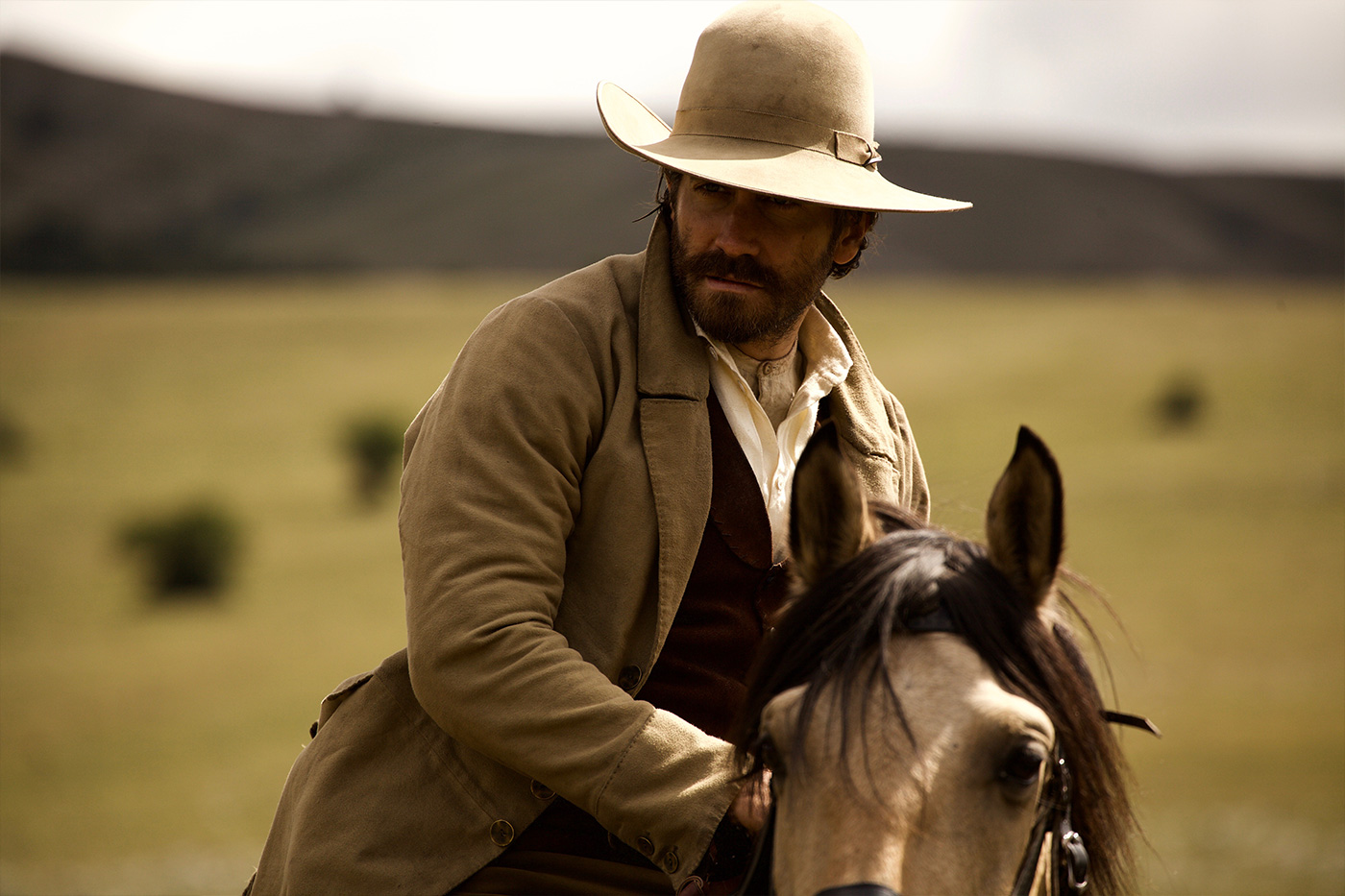 How did you use your experience of RUST AND BONE for the missing arm of Charlie?
(Answer by Barthélémy Beaux, compositor on these shots) There are lots of similarity concerning Charlie’s arm (Joaquin Phoenix) and Stéphanie’s legs (Marion Cotillard in RUST AND BONE) in the way we approached these shots. Our experience gave us a clear vision of what will work and what will not in our project situation. Especially how do we split the CG and comp parts.

Except the stump which is the only CG part, everything else is done directly in compositing. As we are dealing with skin, muscles movements and clothes folding, it was a huge challenge for the restore. On some shots, we needed to recreate the entire torso, some parts of the head but also the trousers as the original arm was casting shadows on it. For the bandage change shot specifically, the biggest difficulty was that the arm was covering Eli (John C. Reilly)’s chest, hands and some parts of the pulled bandage strip. Furthermore, matching the campfire light flickering on this shot was something very complex since the missing arm was casting shadows.

RUST AND BONE gave us a good experience for approaching these effects, but I think we had to deal this time with even more difficult shots. 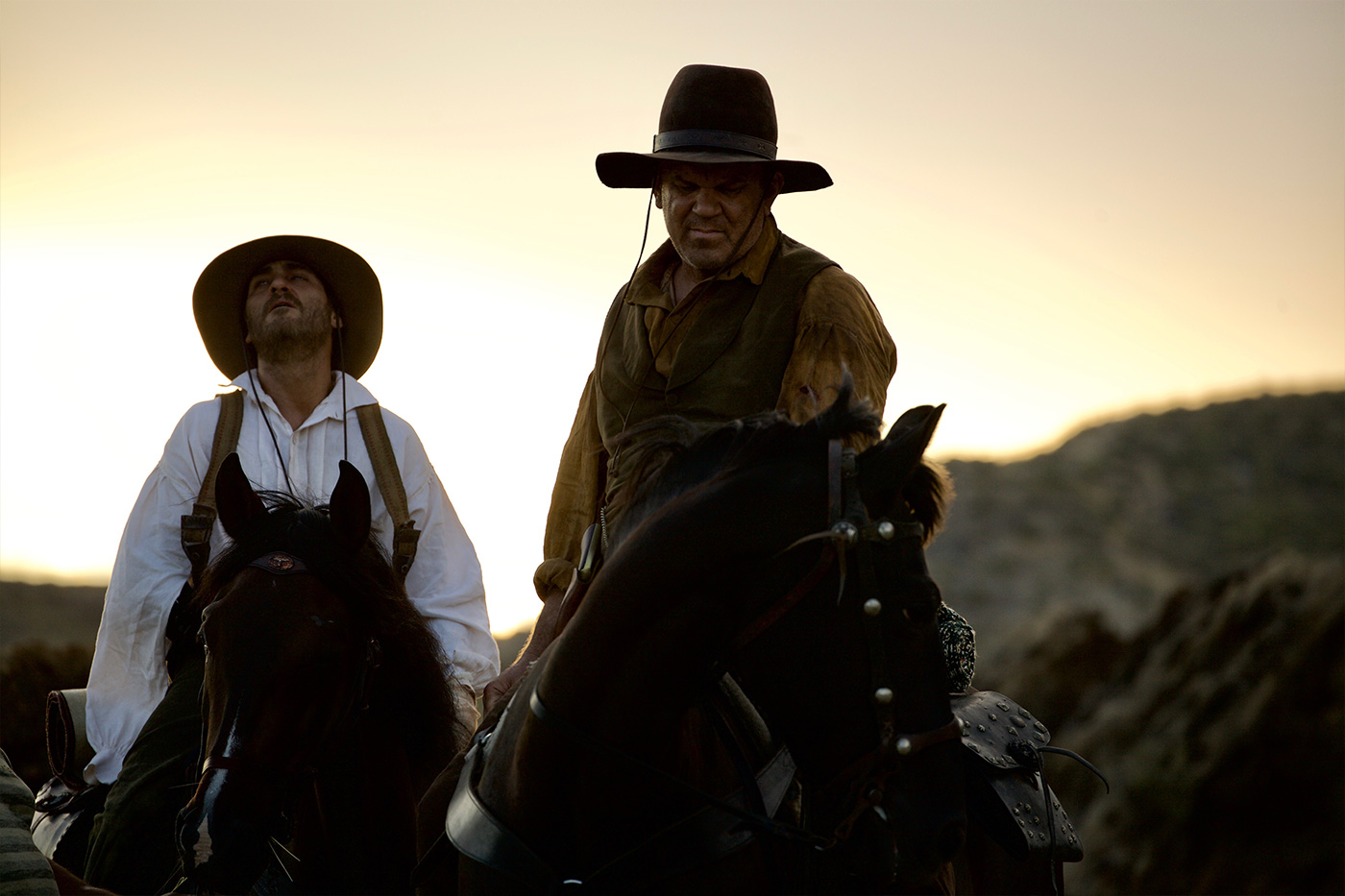 The movie ends with a beautiful continuous shot. Can you explain in detail about your work on it?
(Answer by for Morgan Hardy, compositor on this shot) As you noticed, John C. Reilly and Joaquin Phoenix appear in several places during the shot, enjoying rest throughout the course of some out of time moments. On set, we made the whole shot several times with the actors at different positions and extra people playing the missing positions of the brothers. Between some key scenes of the shot it was possible for the actors to run from a position to another, out of frame, but not for all. This is where we interfere.

The invisible cut is only compositing. They didn’t use a camera control on set, so the main challenge was to analyze the different takes and to choose the best moment for a possible cut. Then we recreated a fake camera movement from one take to another, with a lot of 2D patches to simulate fake parallax between the set elements. No magic trick or 3D track for this shot, it was mainly compositing patching. The most important thing to us was to keep this softness in the camera movement. Jacques Audiard ends his movie with harmony and achieve this continuous shot was very important to feel this emotion. 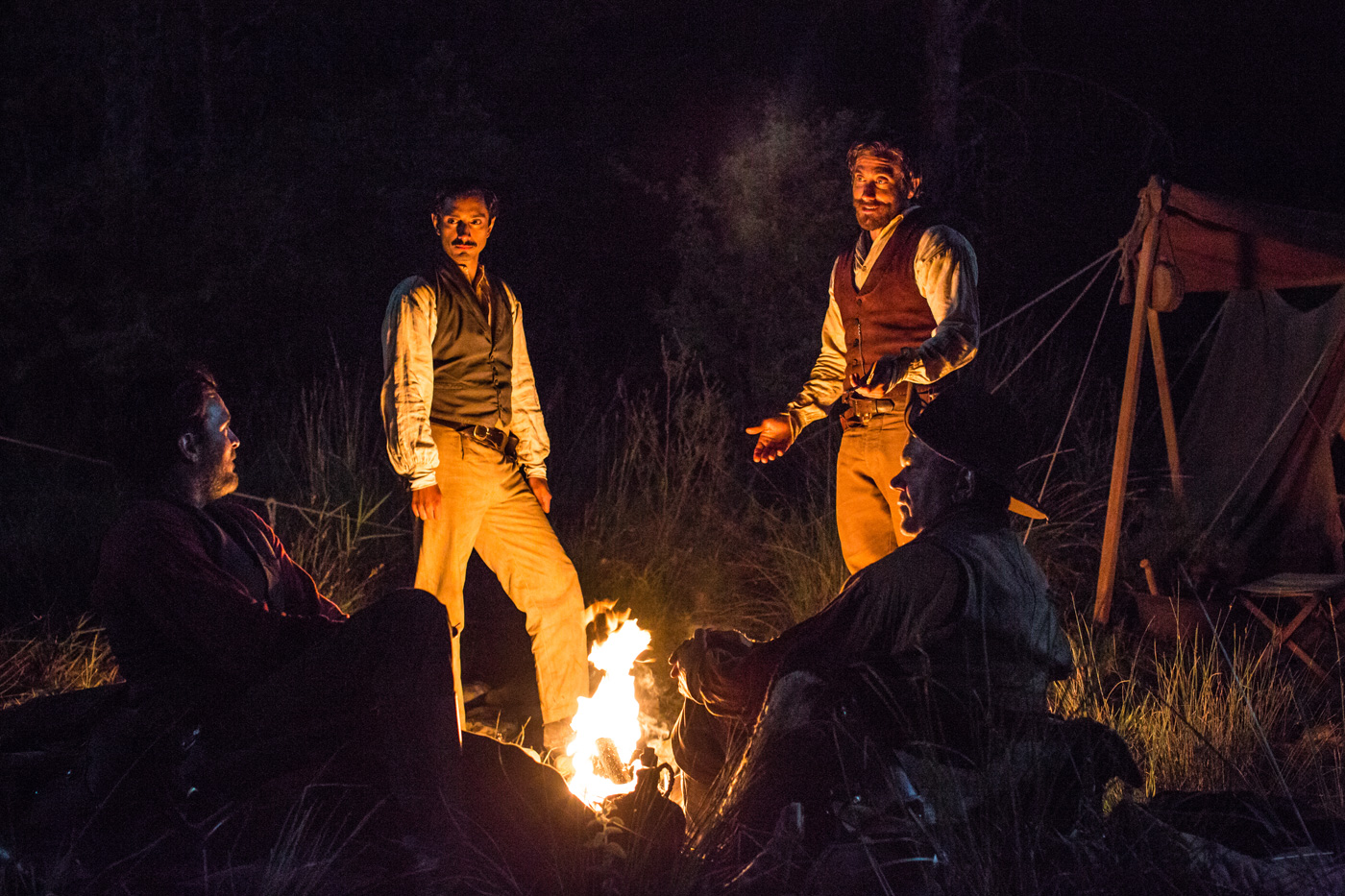 Which sequence or shot was the most complicated to create and why?
The sequence of the barn on fire was more complicated than expected. We had to add the horses in CG and the configuration of the light was complicated. The challenge was to find a compromise between the readability of the horses and the integration. François Crèvecoeur worked hard to achieve the result.

What is your favorite shot or sequence?
The spider sequence was really nice to do 😉
First, we had to find the right species, a kind of spider that you can find in Oregon Forest. We chose that one because of its material specificities. Knowing that it would be lit by a campfire we chose a spider that had translucence in order to achieve a more spectacular result. 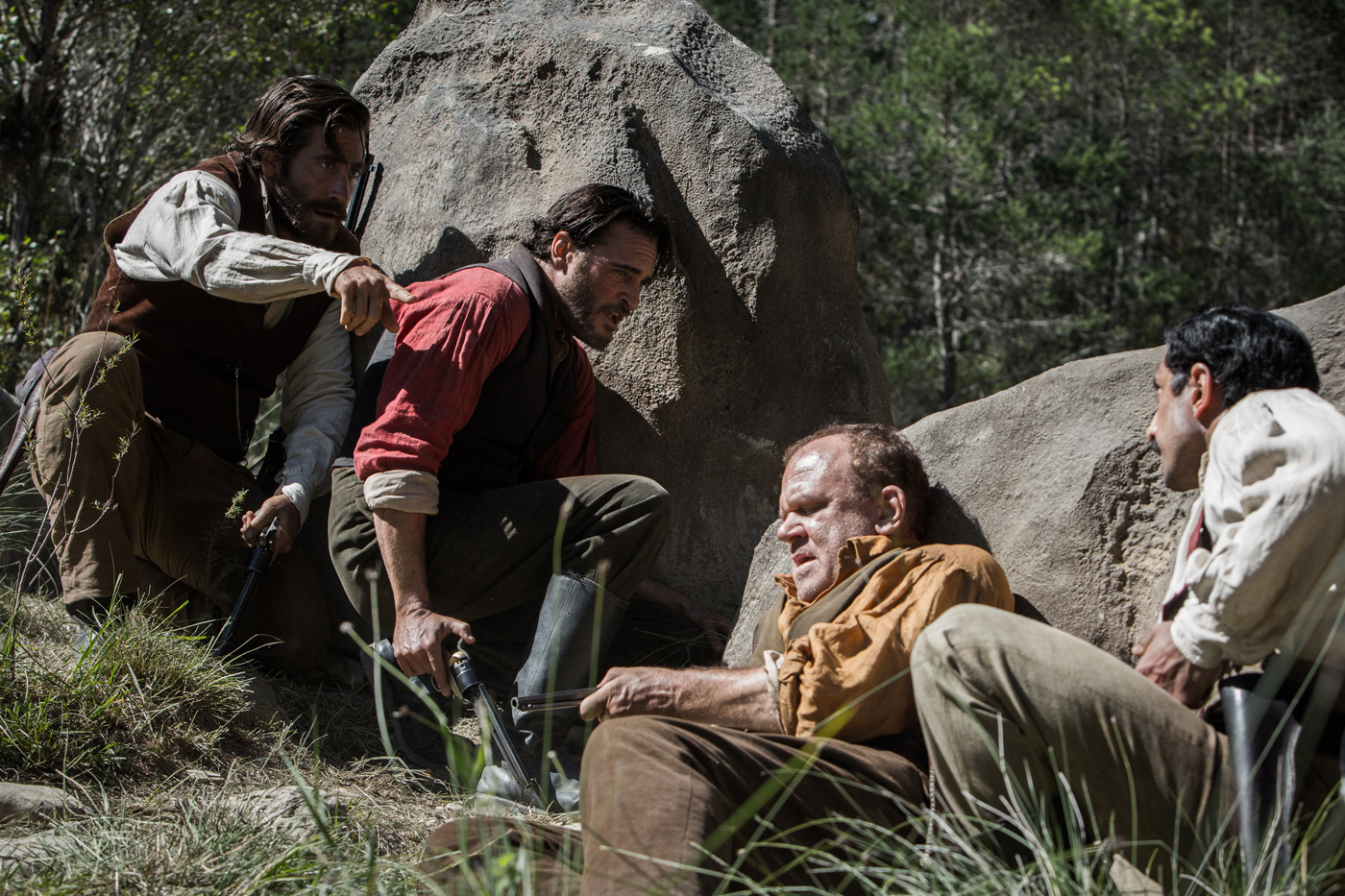 How long have you worked on this show?
4 months on set, then 8 months to do the VFX.

What was the size of your team?
About 25 people.

What is your next project?
Top Secret 😉