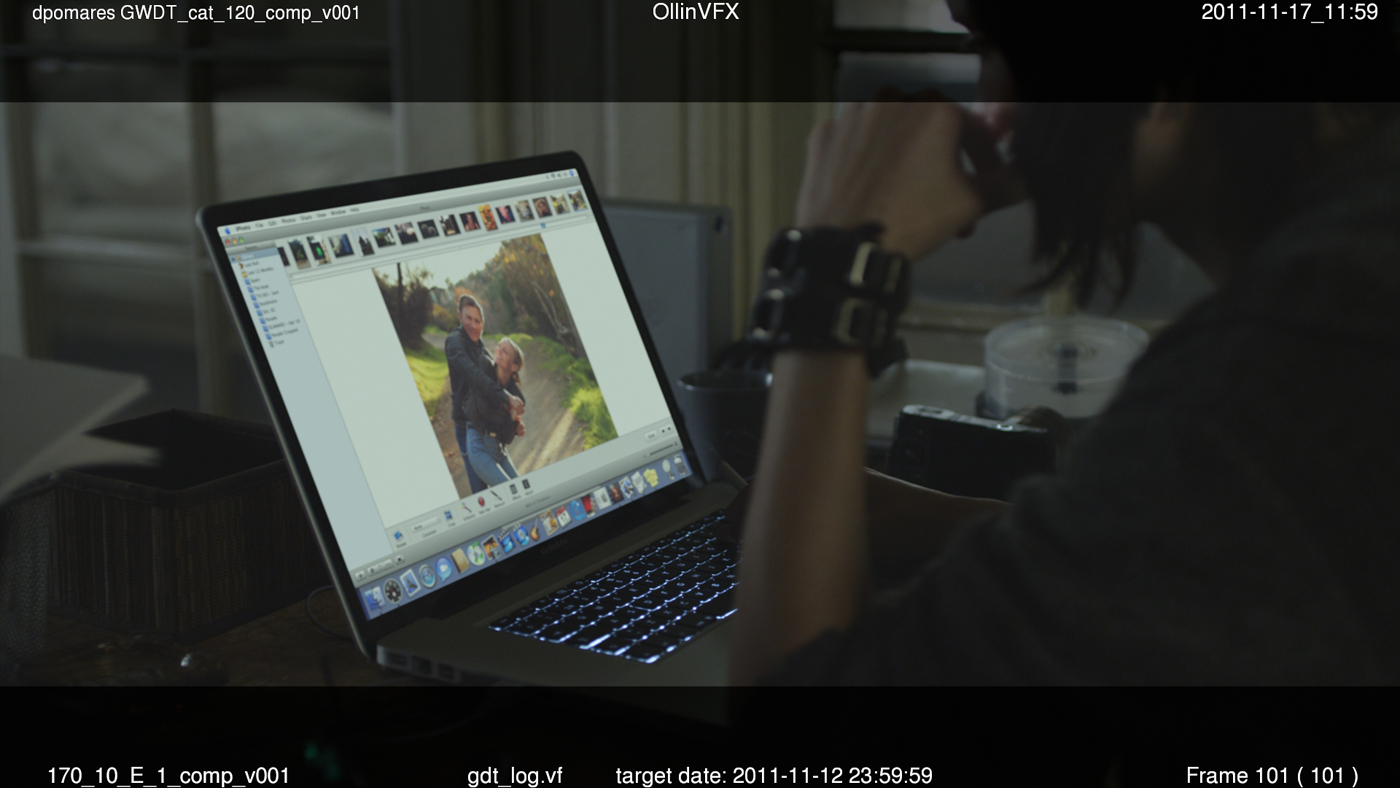 Charlie Iturriaga is back on The Art of VFX. THE GIRL WITH THE DRAGON TATTOO is the fourth collaboration between David Fincher and Ollin Studio.

How did Ollin Studio got involved on this show?
Ollin got contacted by post Supervisor Peter Mavromates in August 2011 to check availability of the studio for the project. The job need to be done was more about volume than complexity. He mention that there was plenty of VFX shots, and the time was short.

This project is your fourth collaboration with director David Fincher. Can you tell us more about it?
It’s amazing as a supervisor to be recurrent with a director, and being recurrent with David Fincher is a dream. Every time you start a new production, there is a learning curve, from technical/management to creative decisions. When you are lucky enough to get called several times by the same creative team, you already know what is the salt and spice that is adequate for whatever you are doing. If it’s a digimatte, Green Screen comp, or even a cleanup, there is a specific quality that you hit sooner (Not talking only in consideration the technical quality, but look/creative quality)

David Fincher is a very precise Director (and all his team), and precision is what defines our work in this movie. It needed a very precise delivery date from us, precise look, precise track and not that many iterations on each shot.

How was the collaboration with Production VFX Supervisor Ruslan Ogorodnik?
Unfortunately I never got to meet him. Our work was during the post production part of the movie and working directly with David Fincher, Peter Mavromates and Tyler Nelson from Post.

What have you done on this show?
We did more than 230 monitor comps, from computers, TVs and monitors. Also blood, wire removals, and something quite peculiar that we are finding more and more in movies: « Fancy Splits »

Fancy Splits is what I call to the comps that are called from editorial that need to join different takes to enhance interaction of characters in screen. Sometimes Director and Editor likes one take of one of the actors, and another take of another actor (most of the times with moving camera or different perspectives) then, is the job of the compositors to put them seamless in a single take. Sometimes at the end we design a camera move. It’s funny how much work something that seems not complicated, and how much a difference make in the context of the sequence!

Can you tell us in detail the creation of the various screen?
A lot of the storytelling of the movie is based on the interaction of the characters with their computers. Lizbeth and Blomkvist are constantly doing research on their computers, and those screens have significant screen time. As David Fincher mention in one of the meetings/screenings we had, this movie relies heavily in monitor comps, it’s interaction and imaginary is very important for telling the story.

On the other side of the spectrum, there was a technical aspect of having the source material (camera) in 4k and 5k. After doing some analysis of the images, I found that because of the high resolution of the capture media, you can even see the sub pixels on the monitors when there is a perfect focus on the computer/screen plane, and « moire » patterns are generated, which are different from camera to camera.

Knowing that we have more than two hundreds shots to solve, we decided to go for a 3D CG solution for the project, instead of doing only a 2D comp of the monitors. That gave me and my team a way to « divide and conquer » doing QT dependent on the technique, and not in a single comp artist solving the shot. Also it gave me the possibility of having an homogeneous look across the movie without having to worry of doing full sequence checkups too often to evaluate consistency.

That being said, we developed a very simple Renderman shader that replicated, depending on the brand and type of monitor, the exact pixel resolution and sub pixel pattern. Then we compare different shading rates, and anti-alias algorithms to match what was closer to the sampling of the real world camera, to replicate patterns, moire and softness of the original images. Also, flicker patterns were reproduced taking in account both the original plate, shooter speed of the camera and refresh rate of the computer being shoot (sometimes the computer was turned off in the original camera material).

That gave an element to the compositors that was very close to real life light source, and they can just focus on color balance (which was also based on computer model/type of monitor, as a Sony Vaio has a different « tint » than a Mac monitor) and bright and dark levels as well as light bounce and other finishing details.

The split of tasks let us evaluate and approve every step independently, and have tracking team doing and perfecting the tracks, TDs doing the look and compers doing the final assembly and delivery. If the monitors were far from camera, the compers had a 3D camera in Nuke, which was already approved in track from the tracking team.

I need to mention another amazing work that falls outside the realm of our VFX team, and that was the element creation or content creation. This heavy lifting was prepared and setup by Production’s editorial.

What references did you received from Production and David Fincher for the screens?
This was the first time we did that many monitors for a David Fincher movie, but from other projects we worked for him where we did a couple of screen replacements, one of the directions was always « It have to be like it was shoot in camera ». That was again a note in our first look presentations for Tattoo. David Fincher said… « if that is the way it should be in reality, then that’s it. ». Sometimes on a review he mentioned… « it looks like crap, so it’s perfect! », referring to the high amount of flicker, moire and texture of the screen.

Why did you used such high resolution (4K and 5K)?
David Fincher is always very cautions about camera stabilize and composition… I can tell you, but I might be in an error, that it was one of the reasons why he and production decided to go for the 4k-5k route. From the beginning, the framing that was used in the final release of the movie, was a subtract of the full frame of the camera sensor, giving headroom for repo, without loosing and resolution and quality!

The reason of using different 4k and 5k was because they shoot with 2 different RED cameras, one of which was the Epic in 5k. I decided to preserve the full resolution of the images for the VFX as the look of the monitors changed when created/rendered in 5k than doing it from the beginning in a lower resolution.

Which softwares did you used for the motion graphics?
As I mention earlier, it was Renderman and Maya, 3D equalizer for the tracking, Nuke for the compositing.

How did you achieve so many shots in such a short time?
I think the trick was to have as perfect as possible the shot the moment you present it to the director. To achieve that, divide the tasks and have a tough Quality Check of each of them, let us almost never have kickbacks from the director because of technical fails, and also let us parallel all work in a lot of artists, keeping the consistency across the board… even in something as straight forward as monitor comps.

Also we setup a server in editorial at production, when after reviewing and signing internally by Ollin, we transfer overnight directly. That way editorial would have in the morning as many shots as possible ready in the different formats (DPX, Qts, etc). While we were reviewing in the morning with the director, editorial was already checking that everything was fine with the files to conform the movie.

Can you tell us more about your work on the Basement torture?
In Basement sequences, most of the work was blood enhancement, which was done through paint work, also wire removal which was done through the regular techniques, and bag enhancement for Blomkvist face. Sometimes part of his neck rig was different from take to take, so we cleaned up to make it look consistent, also the bag had at some moments space that would give some air to the actor, which David Fincher was very precise in retouch.

This was mainly a 2D sequence, with the exception of the monitor comp which was done doing the technique previously mentioned.

What was the biggest challenge on this project and how did you achieve it?
I think more than a VFX technique problem, was a production streamline challenge. We had only 4 or so weeks to turnover around 250 shots in a higher resolution that we normally use. Our facility is in Mexico City, and creating a comfortable pipeline where transfer/presentation of the material was one of the first aspects that I wanted to make sure was not consuming time… or at least not too much.

Was there a shot or a sequence that prevented you from sleep?
I can tell you that this project was very satisfactory in that almost no one had problems sleeping (laughs). There were a couple of shots that had very difficult and extensive roto tasks (like changing an actor from one place to another for composition/continuity reasons) but the only hard part was inspecting frame by frame in 5k those shots… as we don’t have (and as far as I know there is not commercially available) 5k projector to screen the material.

What do you keep from this experience?
I think in different levels, and as in any project, you take a lot from it for the future.
I can tell you that all Ollin team really give a great execution, and I feel very lucky of working with them. Also, lucky of working again with the Post team of David Fincher, which are super Pros!
On the technical side, spending some time at the beginning of the project to decide the best pipeline really had benefits, so that is something I will always do!

How long have you worked on this film?
It was about 5 weeks.

How many shots have you done?
248 shots.

What is your next project?
Need to check if I can disclose! (laughs)

// THE GIRL WITH THE DRAGON TATTOO – SHOT BREAKDOWN – OLLIN STUDIO