Before becoming a freelance visual effects producer, Shari Hanson has worked for many years at Industrial Light & Magic in the commercials department and then in features. She took care of the effects of films such as THE ISLAND, MISSION: IMPOSSIBLE III, TRANSFORMERS or STAR TREK.

How did you get involved on this show?
The lovely folks at Paramount Pictures gave me a call about the project.

How was the collaboration with director Alan Taylor?
Great, Alan was very open and collaborative, especially with our VFX team.

What was his approach about the visual effects?
We all wanted to stay true, as much as possible, to the original primarily practical approach to the VFX and SFX. 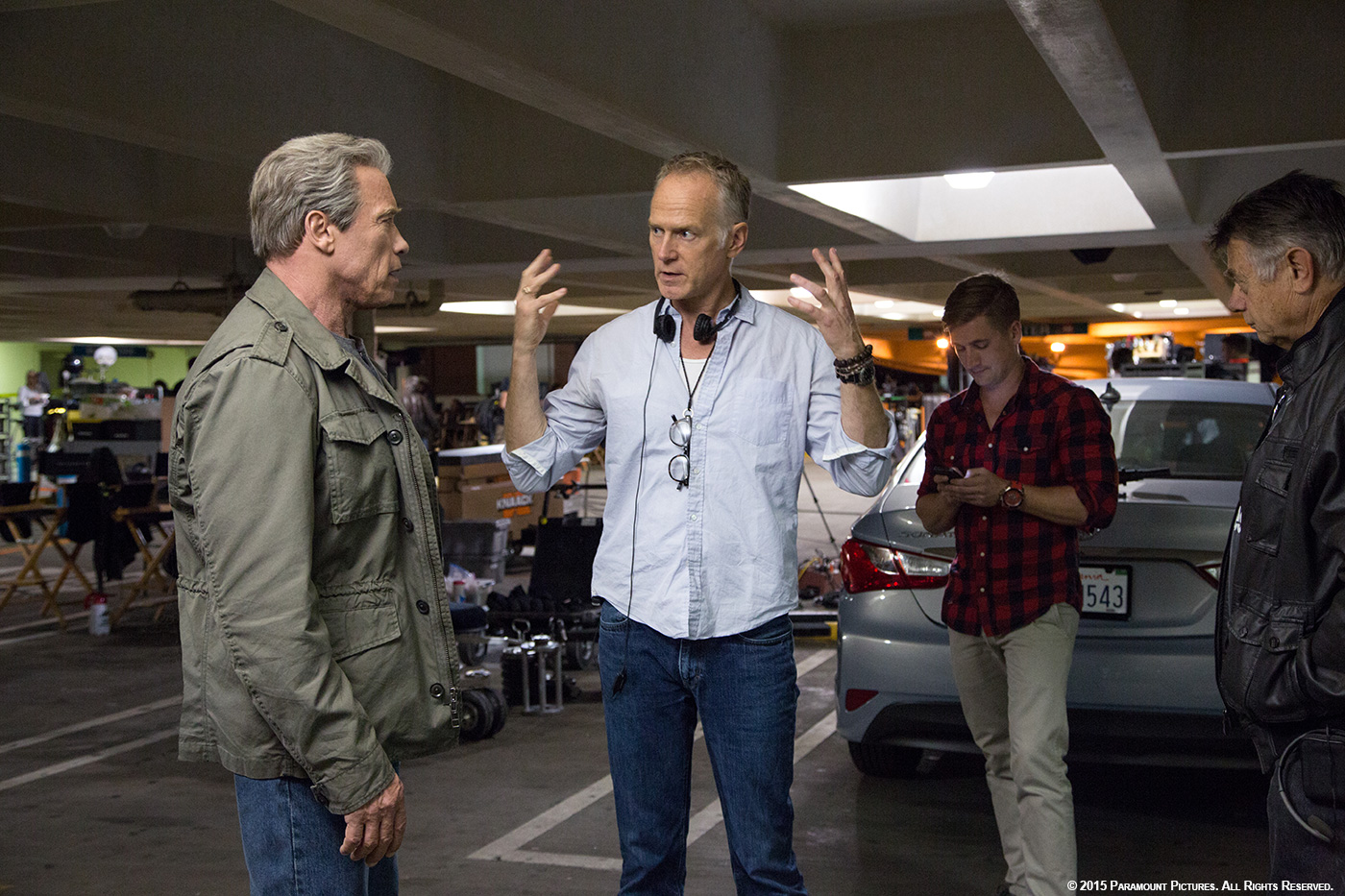 How did you approach this project?
Janek and I worked closely with Alan, our wonderful Production Designer, Neil Spisak, and the Producers, David Ellison and Dana Goldberg to evaluate each sequences/scene and how we could best achieve with a touch of homage to the franchise whenever possible.

Can you describe one of your typical day during pre-prod, shooting and post?
Here’s one from the shoot. Let’s say it’s a Sunday at midnight. We are on set for 2nd unit shooting all night. I leave our team (Gary Brozenich from MPC or Pete Bebb from Double Negative (DNEG) depending on the work) and go home at around 3:00a. Sleep for a few hours, then go to 1st Unit (Janek Sirrs) around 8:00a. On set with them through lunch meetings, then stop by dailies at 4:00p and head back to 2nd unit for night shoot again. Repeat. We had a long stretch of 1st unit on days and 2nd unit on nights concurrently. Fun was had by all!

There is a great sequence with two Arnold fighting. Can you tell us more about it?
That was a really interesting one! The challenge of crossing the uncanny valley with the perfect synthespian was a big reason the project appealed to me. Your best bet is to chat with Sheldon Stopsack at MPC for the details. They did an amazing job. (NDR: The MPC interview is on the way).

Can you explain in details about the creation of the Young Arnold?
Well, it all started with a naked guy. Again, best to chat with Sheldon at MPC.

Two new Terminators are joining the game, the T3000 and T5000. Can you tell us more about the design process?
The T3000 (John Connor) is the most featured in the film. We started during prep and worked with several great creature designers. Ultimately, the final design was done in Post Production and the creature you see in the film sourced a lot of these original designs, but was completed at DNEG. The T5000 is only seen briefly and is intended to be an evolution of the holographic projection/plasma material you see as the child of Genisys emerges at the corporate headquarters towards the end of the film. His design was done entirely at DNEG and the source material was both organic – drawn from human and ocean creature biology, as well as textural and conceptual – drawn from modern art, light installations, etc.

What references and indications did you received from director and production for these new Terminators?
Alan often referred to the T3000 as (and Arnold says in the film) machine phase matter. While he has a metallic appearance, he can evolve and repair himself in a hybrid machine and organic biological fashion.

What were the main challenges with them?
The complexity of the T3000 character and all the performance he has to do in so much of the film. For the T5000 it was striking the balance of recognizability without being too literal to the straight up old school hologram concept. Peter Bebb and his team at DNEG are really the best folks to describe the details of our challenges with both of those characters.

Can you tell us more about the Future Wars sequence that features tons of robots like the T800 endoskeletons, the Hunter Killers and the new Spider Tank?
This was intended to show the audience and true fans more of the Future War, that hadn’t been seen in all it’s glory in the previous films. However, for good editorial purposes, this got cut down a bit in the final picture. However, I’m sorry the true fans didn’t get to see more of it. The updated Endoskeleton, Spider Tank and Hunter Killers were all designed by the folks in our Production Art Department and this VFX work was done by MPC.

The Time Machine is also here. Can you tell us more about it and how did you design the time effects?
The time travel effects were intended to be a bit of a homage to the first two films, but with a bit of an 3D organic upgrade. The time machines themselves – the physical set pieces, we designed by the Production Art Department and each one was built either in full or partially. Our SFX team, supervised by Mark Hawker, worked closely with them to build a robotic swinging arm with integrated lighting effects. The team at DNEG did all of the time travel VFX and they were designed by their internal look dev team following concept art from our Production Art Department.

How did you collect all the necessary on-set informations for the various vendors?
Our overall VFX Supervisor was Janek Sirrs and he was also joined by Gary Brozenich from MPC and Pete Bebb from DNEG on set. We were shooting multiple units concurrently throughout the schedule, plus various VFX only units, and there was not a day or scene that went by that did not involve VFX. It was all hands on deck and we were fortunate to have an amazing team of data wranglers, photographers, scanners, surveyors and coordinators to make sure they got everything they needed. They are: Kevin McAllister, Clayton Lyons, Kimberly Rasser, Viet Luu, Derrek Horn, PJ Horn and Jason Van Haverbeke. The vendors were all great to work with us on streamlining our data capture process and all helped each other and shared information and data smoothly. We also brought in specialty vendors for large set/location and talent scanning. Additional VFX vendors were brought on in Post Production.

Can you tell us more about the previs process?
Our previs process was outlined in prep with the key sequences we all felt needed it. Initially, sequences were storyboarded and then turned over to previs. We started with a team from Cavalry and as the previs needs grew, we brought in Duane Flochs and his team from MPC Previs. The previs continued through prep and into the shoot, then it transitioned to post vis. We were lucky enough to have one my favorite guys, Alex Cannon, as our continuous previs through post vis artist.

We added in LOLA for all of our cosmetic work, primarily the Youthification of (the older) Arnold in all of 1984 and One of Us, ILM and Method joined us in Post Production for specialty a la carte sequences and shots.

The vendors were all around the world. How did you handle the progress of the shots?
We sit in a dark screening room for many many hours a day and night.

How did you manage the continuity and the look for all the shots?
Janek does a wonderful job of outlining the show set up from the beginning and his oversight and supervision of all the work is invaluable to managing continuity, overall look and quality.

What was the most complicated sequence to filmed and to completed in post?
Speaking to just of the amount of moving parts, locations, sets, sfx and complexity of vfx it would be the Golden Gate Bridge sequence. It almost pains me to say that since so many great filmmakers and VFX artists around the world have done the Golden Gate Bridge (GGB). This is actually my second time. But for Terminator, we built a 500′ replica of the topside of the GGB in New Orleans to do our stunt work and the big bus flip as well as an elevated shorter set piece for the hanging over the side of the bridge bit. Our VFX team went to San Francisco and crawled all over the GGB shooting massive amounts of plates and stills. Since the bridge cannot ever be shut down to traffic, the GGB people were very helpful in getting us into positions on, in and under the bridge to get all of the footage, scanning and photographs we needed. We also shot running footage/shotmaker plates on the bridge itself. All of this was pulled together by Janek and the team at DNEG into what (we hope) is a seamless and fun action sequence.

What was the main challenge and how did you achieve it?
Making sure all of the work got done on schedule. With patience and fortitude.

What was your feeling to be involved in the Terminator universe?
It was an honor!

Was there a shot or a sequence that prevented you from sleep?
Too many to recount here.

What did you keep from this experience?
I’ll never tell!

How long have you worked on this show?
1 year and 7 months.

How many shots have you done?
In my life or on this show? About eleventy billion in my life, and this show was apx. 1850.

What was the size of your team?
Depends on if it was in prep, shoot or post. The shoot team is listed above, for post it was Janek, our coordinators: Kevin McAllister, Kimberly Rasser, Robbie Janda, and our PA, Brian Walker.

What is your next project?
A swimming pool.