What is your background?
I started as a Compositor in 1998 at GVFX in Toronto. I moved to Hybride in 1999 where I worked as senior compositor on film such as SIN CITY, 300, and the SPY KIDS franchise. Next I went to Mr. X in Montreal working as a Lead Compositor on a number of projects and VFX Supervisor on SOURCE CODE. In November of 2011 I came to Modus as Compositing Supervisor and VFX supervisor.

How did Modus FX got involved on this show?
Lisa Dennis contacted us and asked to bid on the show. Modus had worked with her on SOURCE CODE and a few other projects… After we did, Taylor Hackford and his team requested that I come down to LA and meet with them. They wanted to know who they were going to work with before they signed. 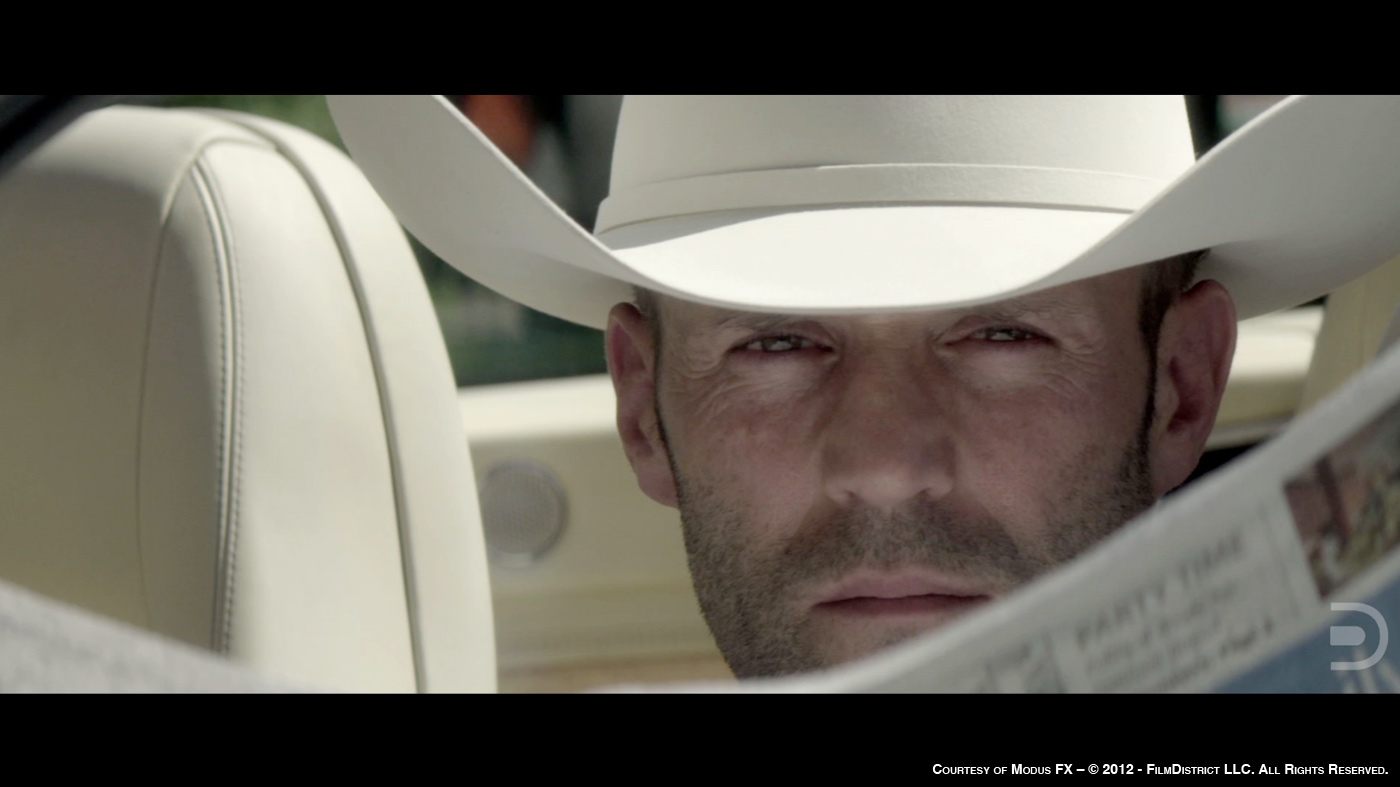 How was your collaboration with director Taylor Hackford?
Working with Taylor was awesome. He is a very established and well-respected director. He has a vision but was always available to listen to any input I might have. He recognized the fact that the reason I was there was to help with the visual effects. It’s my specialty and he used it to the project’s advantage.

What was his approach about the visual effects?
Because these were all invisible effects, he wanted them to be as natural as possible. I let him plan his shots the way he wanted and would work out solutions around the footage. Some shots were already shot and he needed assistance in coming up with a relevant solution.

What have you done on this show?
We did lots of monitor inserts. We also did a lot of wire removals on the balcony fight sequence. The CG knife through the hand was also created by Modus. CG fireworks were also in our workload.

Parker has a fight inside a car. Can you tell us more about your work on this sequence?
This was a simple one… we mainly comped muzzle flashes. We also had to recreate an ear being blown off and the hits to Parker’s chest (blood splatter, wound, etc.).

How did you handle the various screens integration?
Screens were pretty straight forward. We had to generate the graphics including web page design etc. For integration, like most screen shots in the industry, there were no reflection passes so we had to find reverse shots to use as a refection.

During a rough fight, Parker has his hand pierced by a knife. Can you explain to us in details about its creation?
This was a reshoot. I went down to LA to assist Taylor in shooting these. He wanted to use a prosthetic hand and although it was good I knew right away it would never work perfectly. So I suggested that we work with the idea that we would use the prosthetic for the blood and exit but we would also shoot the live hand simulating the action. Back home we matched moved all the plates and ended up creating a CG knife so we could design the action a little better. 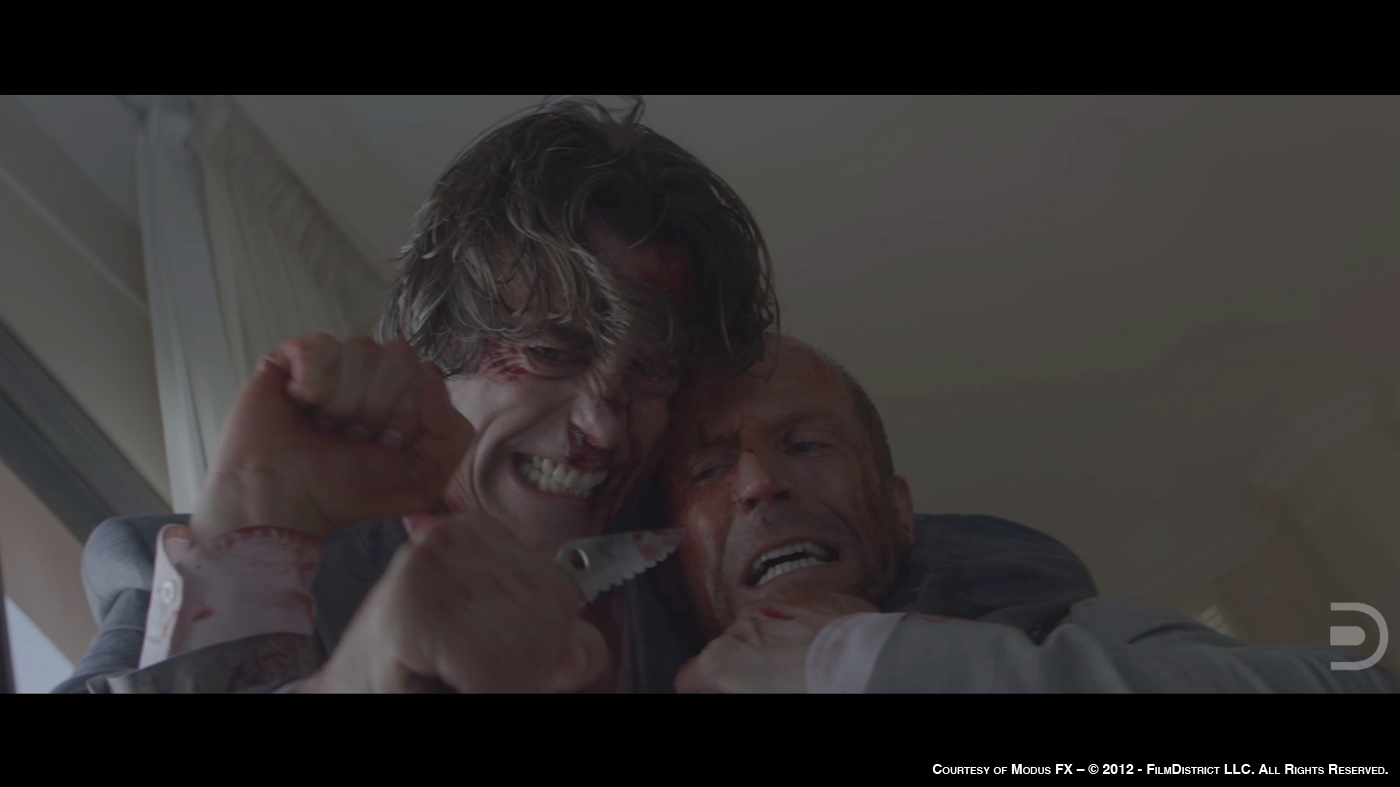 How did you manage the tracking challenge for this shot?
This was all match move in the Flame.
There was no way we would ever get anything tracked for the plate or the hand. Can you explain to us more about your work on the fight on the balcony?
Both actors were suspended over the balcony so needless to say there was a lot of rig removal done. This sequence was already shot so we had no input on how it was done. But really, for something like this. When you have your main actor hanging off a balcony 9 stories up, where the wire is placed is the lest of their worries.

For the fall we had to recreate the last 2 shots in Flame in order to accelerate the fall. The harness made the actor slow down towards the bottom instead of speed up. Can you tell us more about the CG fireworks on the final burglary?
When they shot this, Taylor had the intention of shooting practical fireworks in New Orleans. When he realized the cost, I suggested we show him something in CG. He loved it. We ended up using a mix of Sim FX and practical elements to achieve the final look. Including a matte painting of the melting speaker.

How did you create the various FX such as blood and smoke?
Actually all the smoke and blood was practical elements.

Was there a shot or a sequence that prevented you from sleep?
Surprisingly…nothing. The whole show was a majority of comp shots and we have such an amazing comp team here that I never had any stress. What do you keep from this experience?
The importance of understanding a director’s knowledge in VFX and finding ways to help them understand our industry and what we can do to help make their film better.

How long have you worked on this film?
5 months.

How many shots have you done?
162 shots.

What was the size of your team?
15 artists were involved. Add to this the coordination team which made sure we stayed on schedule and on budget and myself who supervised all the work.

What is your next project?
I’m currently VFX supervisor for a major VFX project I cannot mention at this point. Once it is delivered, I will jump on another project that is coming to Modus in the upcoming weeks. It’s a very exciting period of our growth as bigger and bigger projects are approaching us every year.

What are the four movies that gave you the passion for cinema?
Not all vfx related…
THE NATURAL
THE MATRIX
SEVEN
BREAKFAST CLUB.