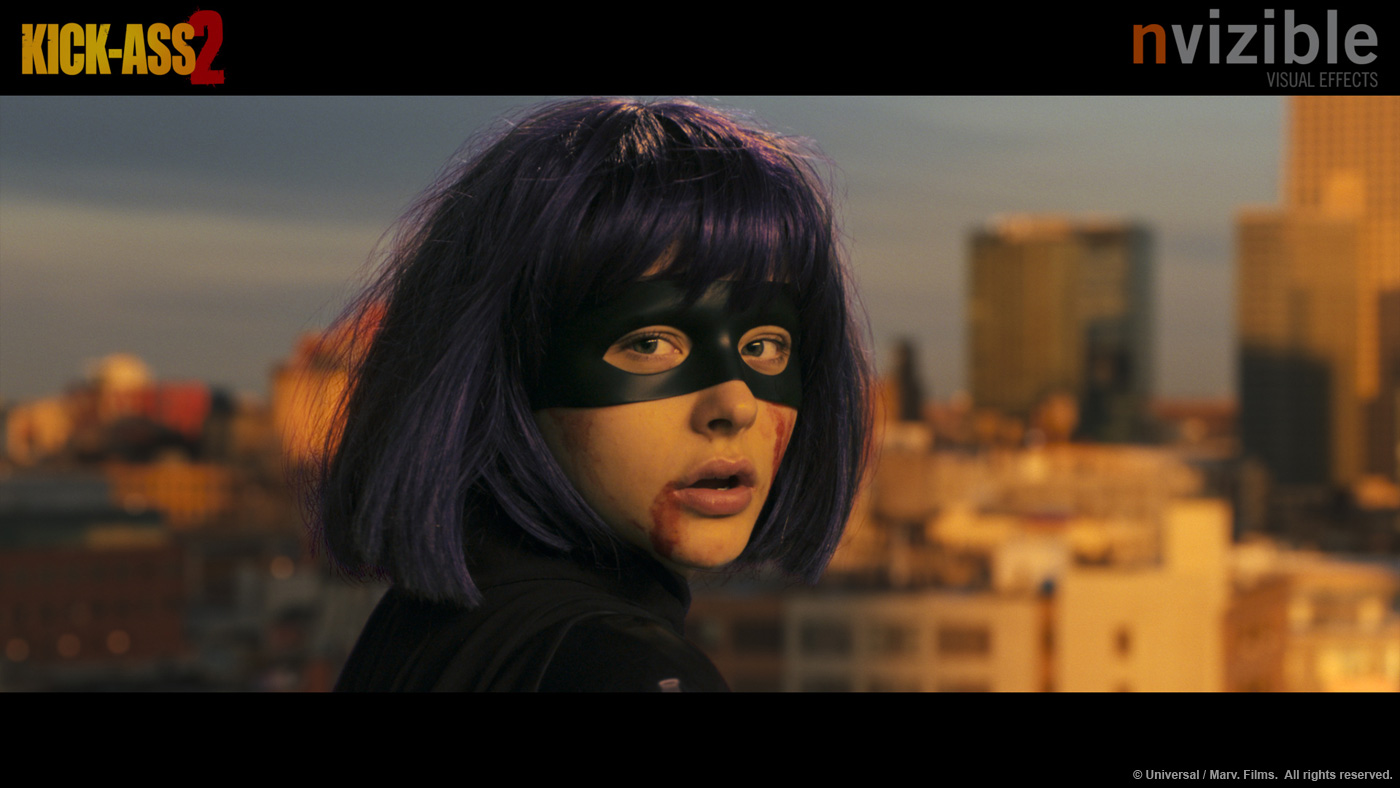 In 2012, Hugh Macdonald had explained to us the Nvizible work on SKYFALL. He now talks about his first experience as a Overall VFX Supervisor on KICK ASS 2.

How did Nvizible got involved on this show?
We approached the producers wanting to get involved with the film, and as part of our bid package, we did a previs test for one particular shot – a shot near the end of the film where Hit Girl kills Mother Russia with shards of glass. This test won us the work on the job and we started in pre-production at the start of August 2012.

How was the collaboration with director Jeff Wadlow?
Jeff had a very clear understanding of what he wanted from the VFX, at the same time as giving us the freedom to put forward ideas for how some sequences should look. Working with him gave me the ability to put forward ideas, and discuss how sequences could work. The whole team was very much working towards the same goal, and his helming of that process made the film what it ended up being. What was his approach about the visual effects?
He gave us the freedom to choose a technical approach, mainly guiding us towards the final result that he wanted. He understood the process, but also knew that he could trust us to take the most appropriate approach.

What was a typical day for you on-set and then during the post?
Gil James (VFX Producer) and I had an office at Pinewood Studios during pre production and the shoot. During the shoot, our day, depending on the kind of thing that would be shot that day, would vary between breaking down sequences that were being shot in the near future, meeting with other HoDs to discuss how to approach upcoming shoots and being on set, keeping an eye on how they were shooting certain VFX-heavy sequences. 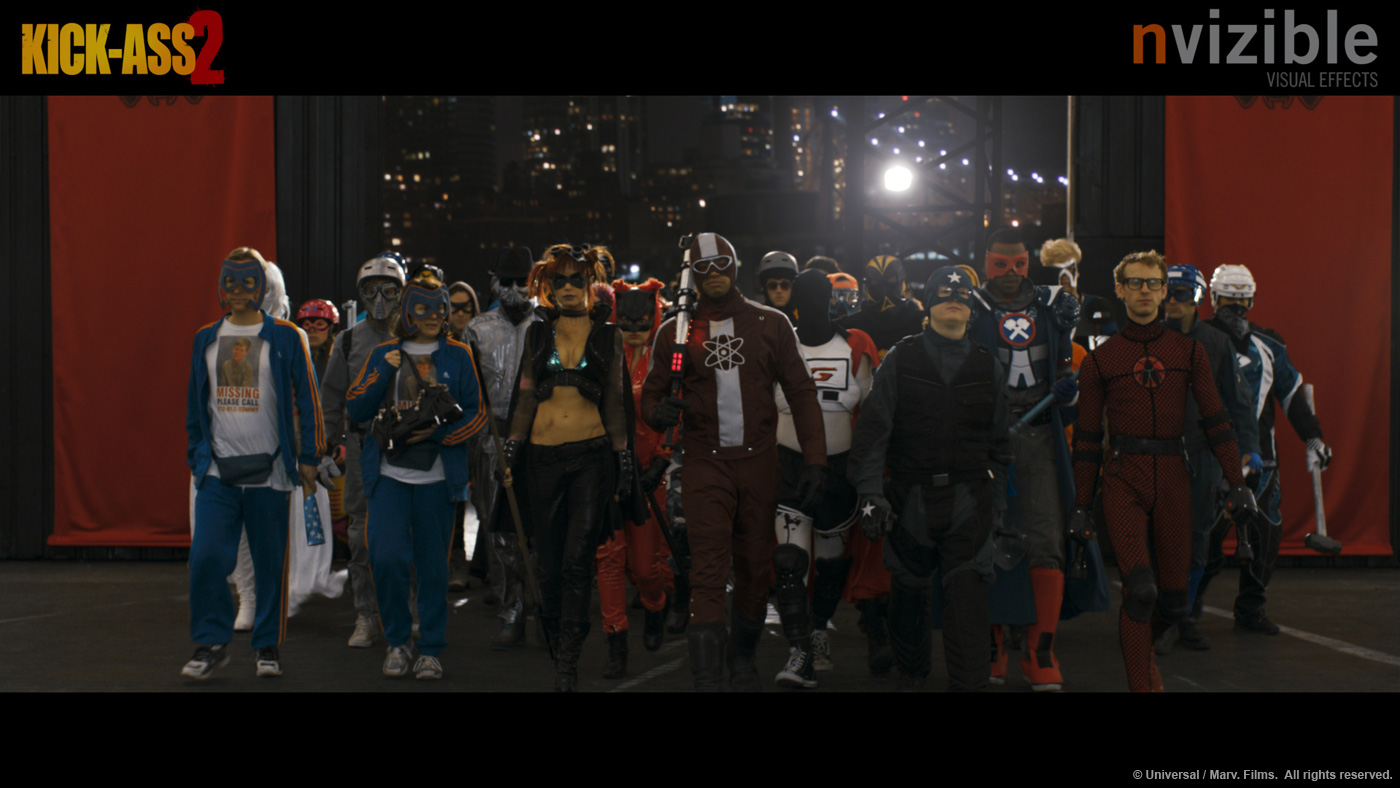 How did you approach the sequence in which Hit Girl has a fight on a van?
This was a large sequence with its own set of challenges. It cuts back and forth between stunt shots on a real road and green-screen shots. The outside shots and backplates were shot a couple of months before we shot the bulk of the sequence in the studio. The whole sequence had been very carefully planned out by the stunt team, led by Jimmy O’Dee, and this gave us an accurate representation of what backplates we would need to shoot, and how the sequence would come together in the edit. This involved very carefully tracking all of the elements that we would need for the final result to ensure that we had absolutely everything we needed.

Can you tell us more about the filming of this sequence?
The stunt shots on a van on a real road were shot using motion control with the stunt double on a treadmill that we later removed. For the others the van and performers were shot on a green-screen and composited into pre-shot background plates. This sequence challenged us to ensure that every shot worked together, between the real location and the stage, and whether we were looking at someone on top of the van, or dragging along the road right by the wheels.

How did you create the environment of this sequence?
We used pre-shot background plates for this that were composited into the shot. Some shots required stitching of multiple back-plates to generate the shot, as camera moves were sometimes modified and added to during the studio shoot.

Can you tell us more about the digi-doubles creation?
We didn’t actually do any digi-doubles in this film. Everything was done with either the lead actors, stunt doubles with face replacements where required, or dummies.

How did you enhanced the blood aspect?
There was a certain amount of blood used practically on set, but there was a lot of extra blood was added in post. We had various shot blood elements from different angles that we picked and chose between to ensure that it worked in the appropriate shots. Many weapons are used in this movie. How did you create them?
Most of the weapons were practical, with some enhancement from us. There were some blade extensions where sword or knife blades had to pierce skin. The main one that we did do as CG was Mother Russia’s knife in two sequences – one where she kills a cop in her rampage on the street, and the other where she kills Colonel Stars and Stripes.

Can you tell us more about the final fall of the main bad guy?
All of the atrium that he falls through, and that is seen in a few other shots earlier in the film, was a CG set extension that we created. For the falling sequence itself, it was shot in 3 different stages. The rooftop stage, where he and Kick Ass fight, had a pit underneath it and a replaceable pane for after it has broken. The shots where he is hanging onto Kick Ass’ arm were shot on this set, looking down through the CG atrium onto a projected floor underneath. When he falls, these shots were shot on wires against green, and the backgrounds were fully CG. He then lands (in a non-VFX shot) in the shark tank, which was on the same set as the rest of the Evil Lair. 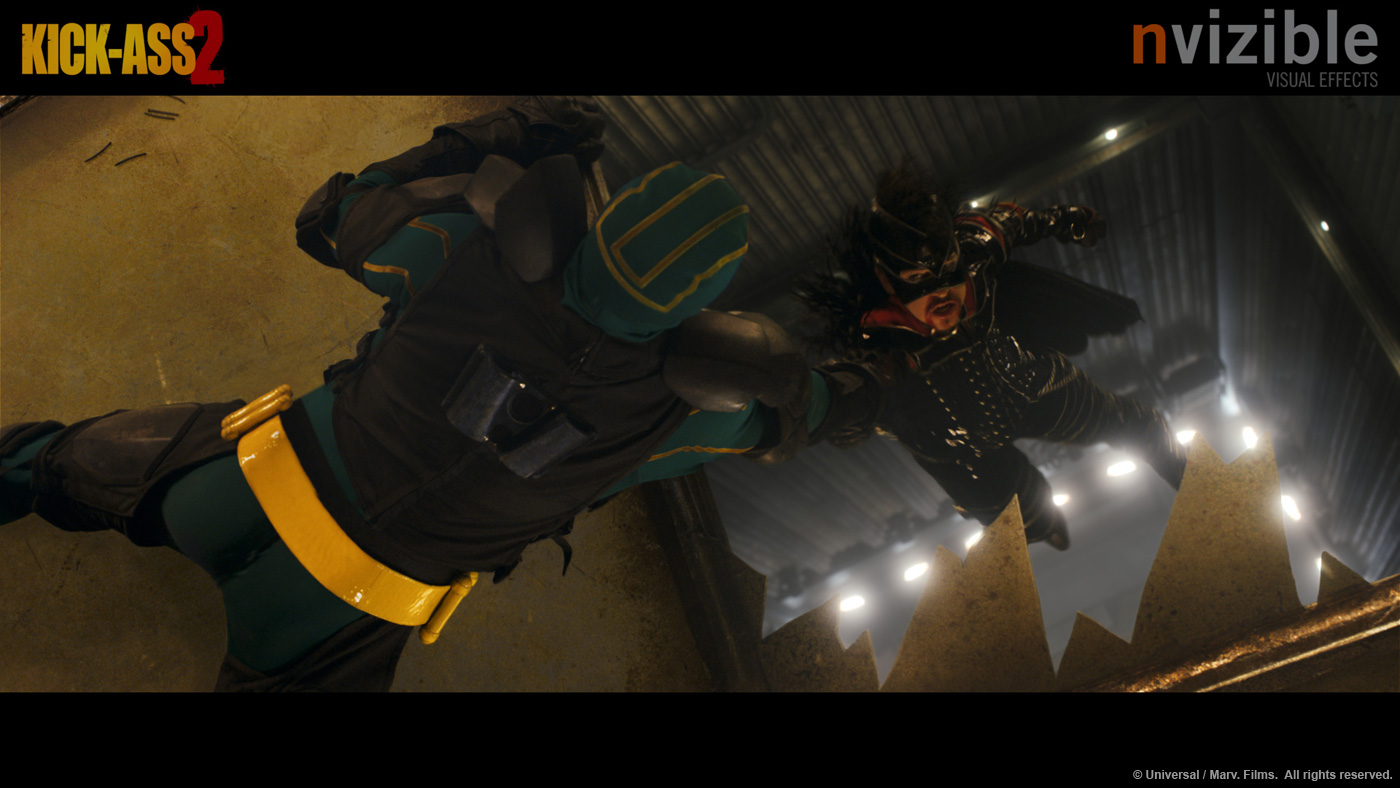 During a fight Hit Girl is moving super fast. How did you design and create this effect?
The final shot in this sequence was the shot that we did the previs test on initially. As part of that test, we came up with a few different looks for how we would show the speed that she had from the adrenaline that she takes. We wanted to keep in in the real world, but give it a slightly stylised comic-book look. Figuring out the balance between these elements was a fine line to walk, and I think that the final look captured that perfectly.

Can you explain in details about the rooftop view?
There are a number of sequences at the end of the film that are set on the rooftop of the Evil Lair, all of which were shot on a green-screen rooftop set. The view from the rooftop, throughout these sequences, had to transition from morning twilight through to sunrise. Panoramic backgrounds were shot from a rooftop in New York in various different lighting conditions, and then a few looks were selected for certain moments over the scenes. Getting these to transition smoothly, and ensuring that the cityscape had life, and didn’t feel like a still, brought the scenes to life.

Can you tell us more about the buildings creation?
The interior shape of the Evil Lair was defined by the stage that we were shooting it on – the plan was for us to add the atrium up from the center for the internal views. Once we had this basic shape, we put together a few different options for the look of the building from the outside, including the stairwell that the two leads use to get up to the roof. Jeff and Russell (de Rozario, the Production Designer) wanted a building that stood out and felt noticeable, while not feeling out of place in the surrounding area. 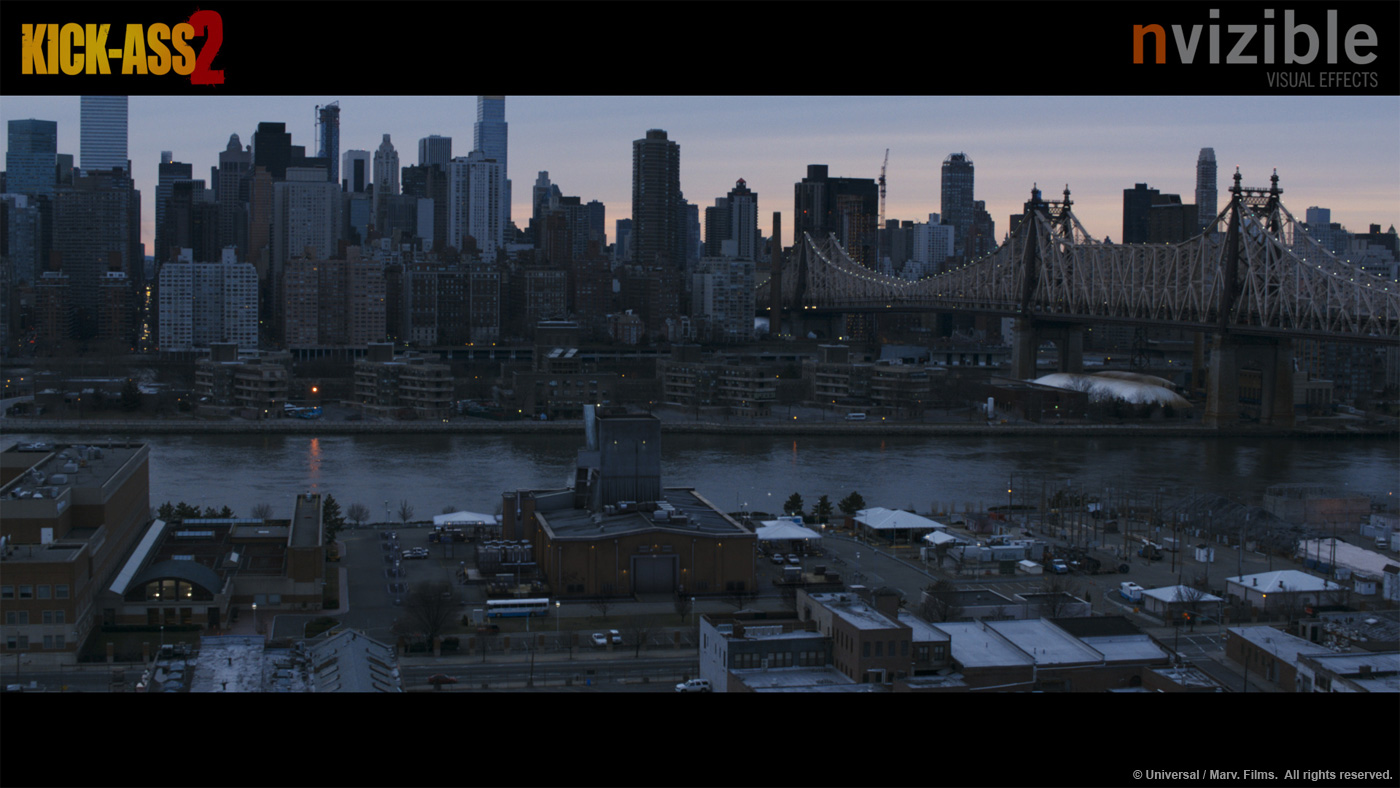 What was the biggest challenge on this project and how did you achieve it?
There were several challenges on this project. The one big shot at the end of the Hit Girl/Mother Russia fight where Hit Girl throws handfuls of glass up into the air, and then catches them piece by piece was a shot that had to look amazing, feel like a big finale moment, while not sticking out of the continuity of the film. We came up with a number of elements, including the CG falling glass, the large foreground pieces, and the trails on her movements, all of which fitted together to create the final shot. Figuring out which elements would work, and what might be a little too over the top was the main challenge, and ensuring that we got the shot to the stage where people would see it and get the full « woah! » effect. Was there a shot or a sequence that prevented you from sleep?
The big shot with Hit Girl killing Mother Russia was one that had its scary moments – it was a shot that brought together a lot of elements, and there were certainly times when we felt like we were juggling so many different things that we got lost in the trees and couldn’t quite see what we needed to pull together for it.

What do you keep from this experience?
For me, this was the first time I had been overall VFX Supervisor on a show, taking it from pre production all the way through to the end of post, so I found that experience a new and rewarding one. It taught me a lot about the production process, and what was involved with overseeing a whole department on a film, as opposed to looking after a team in a facility and being a facility-side VFX Supervisor.

How long have you worked on this film?
It took us about 3 months to deliver all 350 VFX shots.

What was the size of your team?
About 18 people.

What is your next project?
Nvizible are currently working on: THE MUPPETS… Again, OUR ROBOT OVERLORDS, NOBEL, EDGE OF TOMORROW and CARRIE.