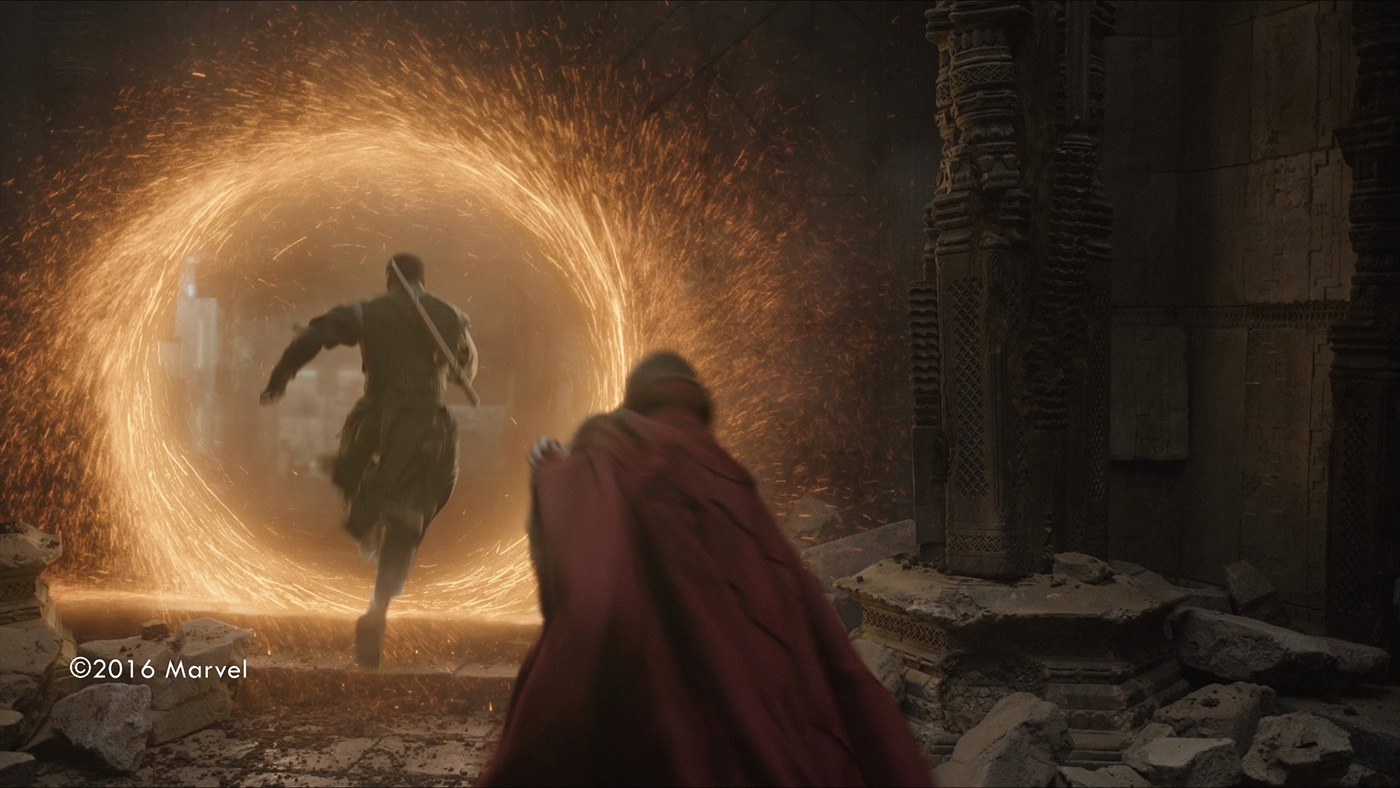 Florian Gellinger explained to us about the work of RISE Visual Effects Studios on CAPTAIN AMERICA: CIVIL WAR a few months ago. He is back today to talk about his work on the new Marvel production, DOCTOR STRANGE.

How did you get involved on this show?
The production supervisor of DOCTOR STRANGE, Stef Ceretti, is a good friend. We’ve been working together in Berlin on CLOUD ATLAS and we also contributed one (1!) shot for the first GUARDIANS OF THE GALAXY that he was in charge of. As ComicCon and the first trailer deadline for DOCTOR STRANGE approached we got a call if we were interested to do some FX simulation and design work.

How was this new collaboration with VFX Supervisor Stephane Ceretti?
Stef is amazing when he is exploring the unknown. Since I know him he worked only on very unusual films. CLOUD ATLAS was something completely new, GUARDIANS OF THE GALAXY was way more colorful than the usual Sci-Fi films plus it had a talking tree and raccoon in it and DOCTOR STRANGE was something else entirely. While exploring these unexplored designs Stef is always spot on, delivers great references and has an unbelievably good eye as the final deadline draws nearer. He’s also one of the nicest and most fun people in the industry. 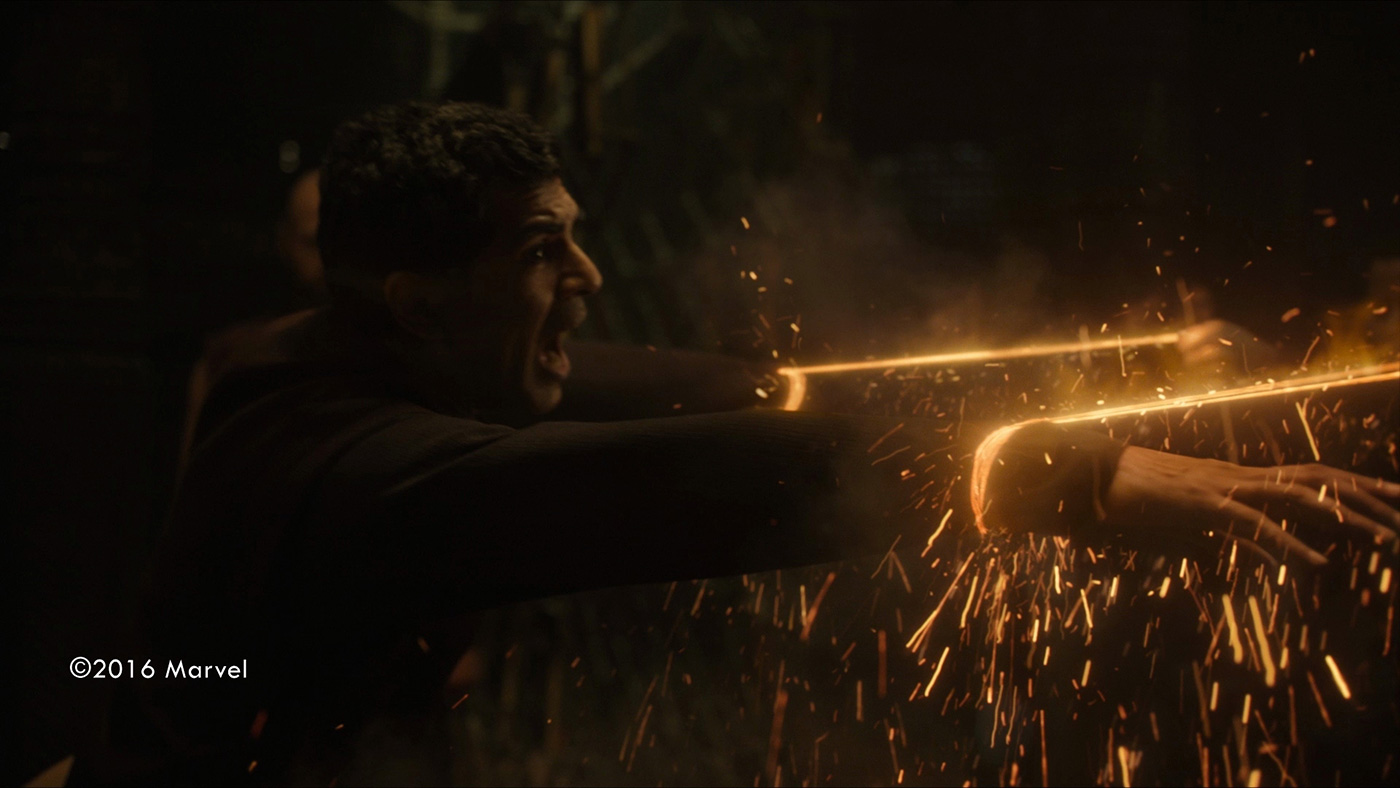 What were his approaches and expectations about the visual effects?
Everything needed to be grounded in the real world, no matter how impossible it seemed. They used a lot of interactive set lighting for scenes with magic. That way the FX and CG renderings would already sit much nicer in the plate and we had very good lighting references to work with.

What are the sequences made by RISE?
At first we only designed a couple of trailer shots of Doctor Strange’s whip that were done for the final film by another vendor. For the film we worked primarily on the opening scene where the Librarian is decapitated by the villain. We also created the dimensional portal to Hong Kong, designed relict weaponry and gave some magic books glowing seals. The Zealots uses the magic to restrain the Librarian. How did you design this magic?
The design of the whips was based on the work that we had been doing for the trailer and some early tests from ILM. At the same time other vendors kept refining their shots and we’d be passing updated versions around to match what others had come up with. 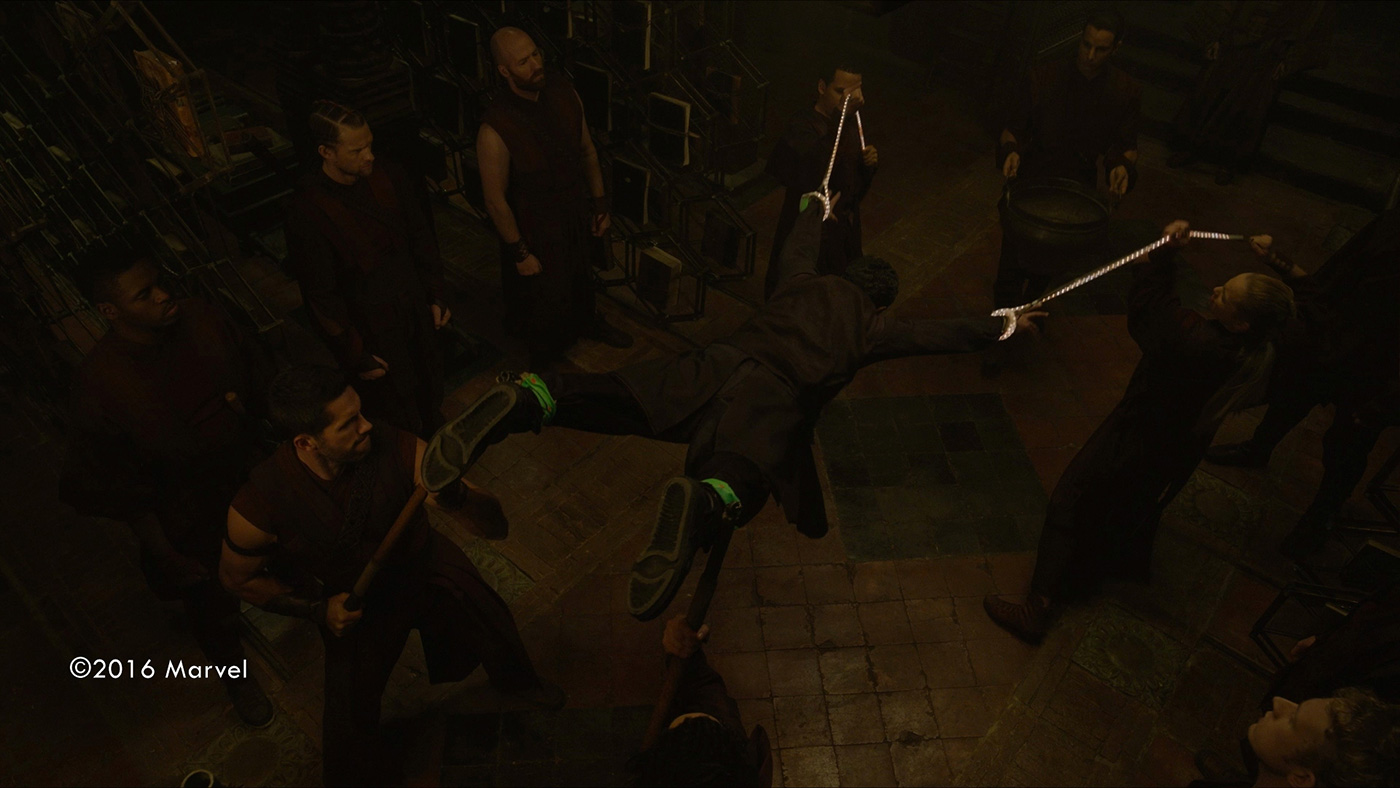 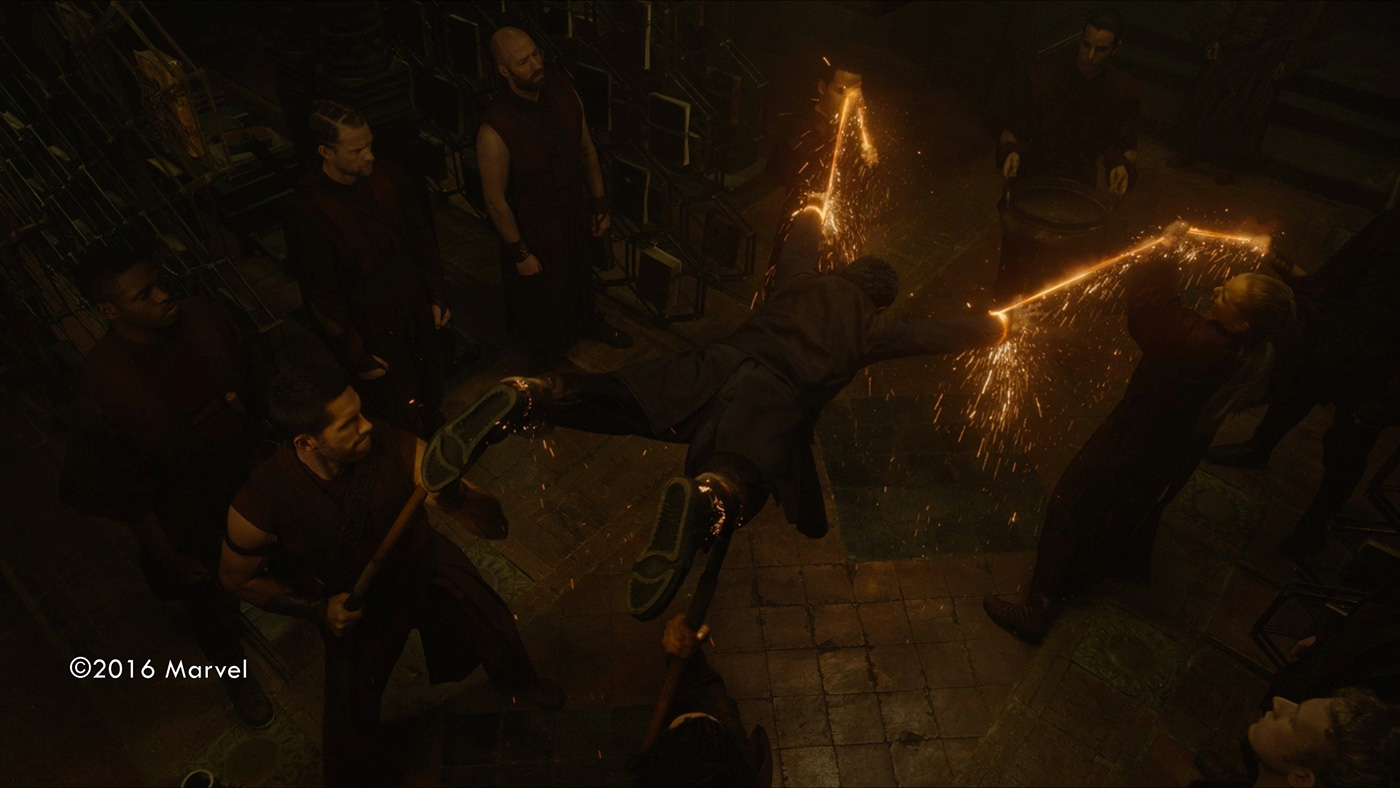 Can you explain in details about its creation?
We started with painting out the LED light strips wrapped around the Librarian’s wrists and ankles. Going from there we tracked the camera, matched the LiDAR scan of the set and built the Librarian and Zealots as rough, animatable characters for rotomation. Once we had blocked and animated their position in space we would use a mixture of hand animated and simulated guides for the whip that would become the starting point for our FX department. In Houdini there were various steps involved to create the whips: The whip itself needed to be made up of individual strands that would split up and oscillate wildly yet straighten to become parallel when the whip was pulled. Off of these strands we simulated smoke with Pyro and emitted sparks of all sorts with varying amounts of motion blur. The sparks needed to split up, bounce and die if they touched the floor. They also needed to emit with the same color as the emitting part of the whip, cooling down over time until they vanished. Some of them would float up like campfire embers, some would drop like welding sparks. All these elements would emit light that we rendered scattering in the simulated smoke and onto the rotomatched character and set geometry to make integration in comp easier, adding to the lighting used on set. For some shots, especially when the Zealots create the whips between their fingers, we also rendered subsurface scattering for the hands to emphasize the source of the power. 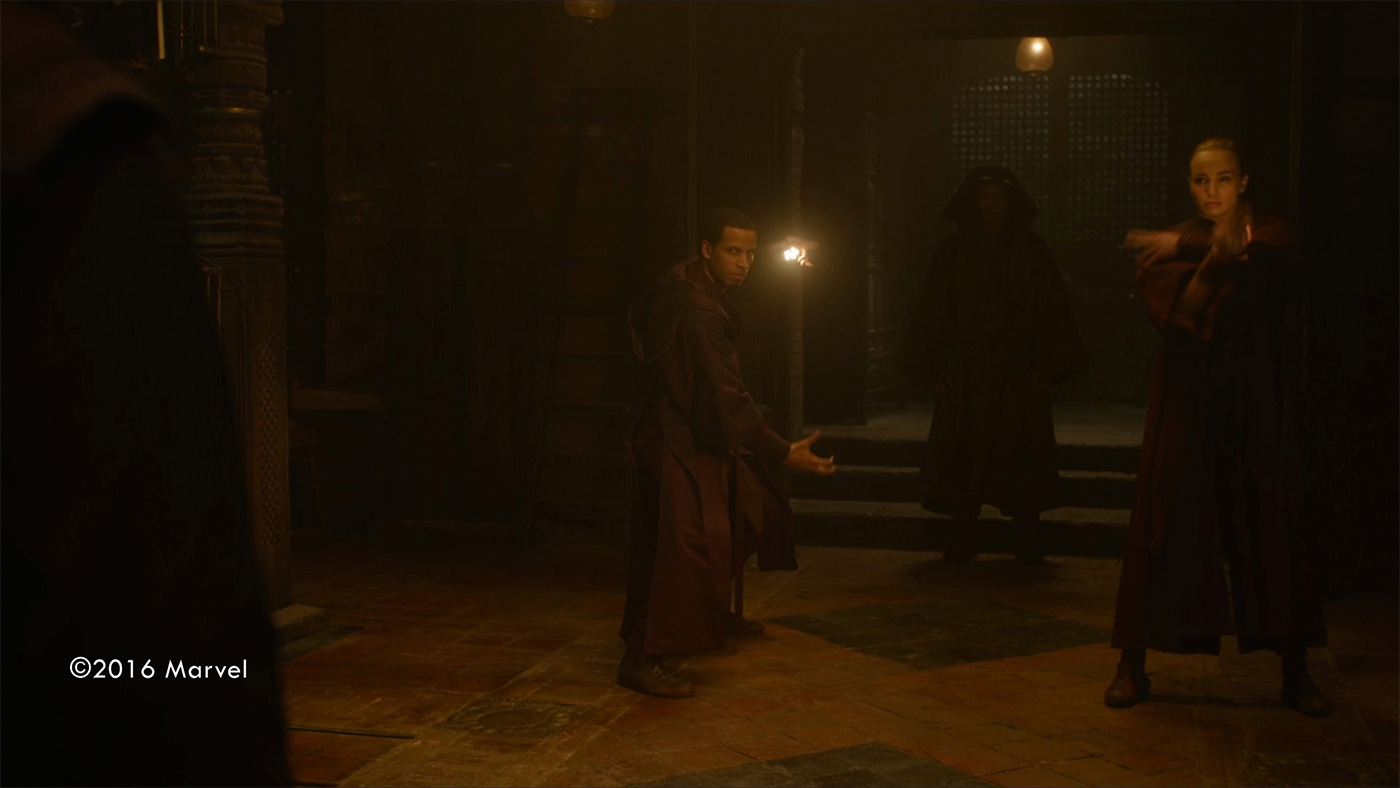 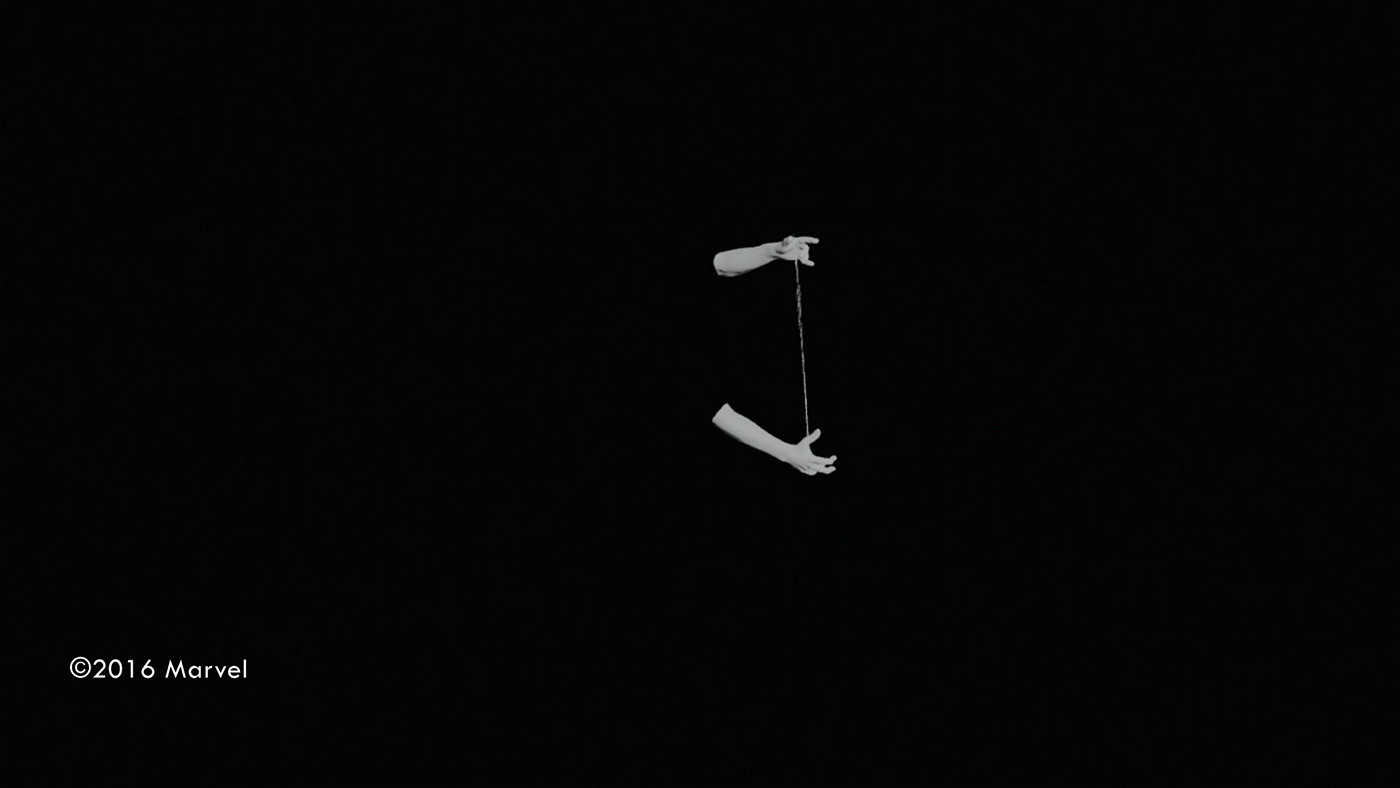 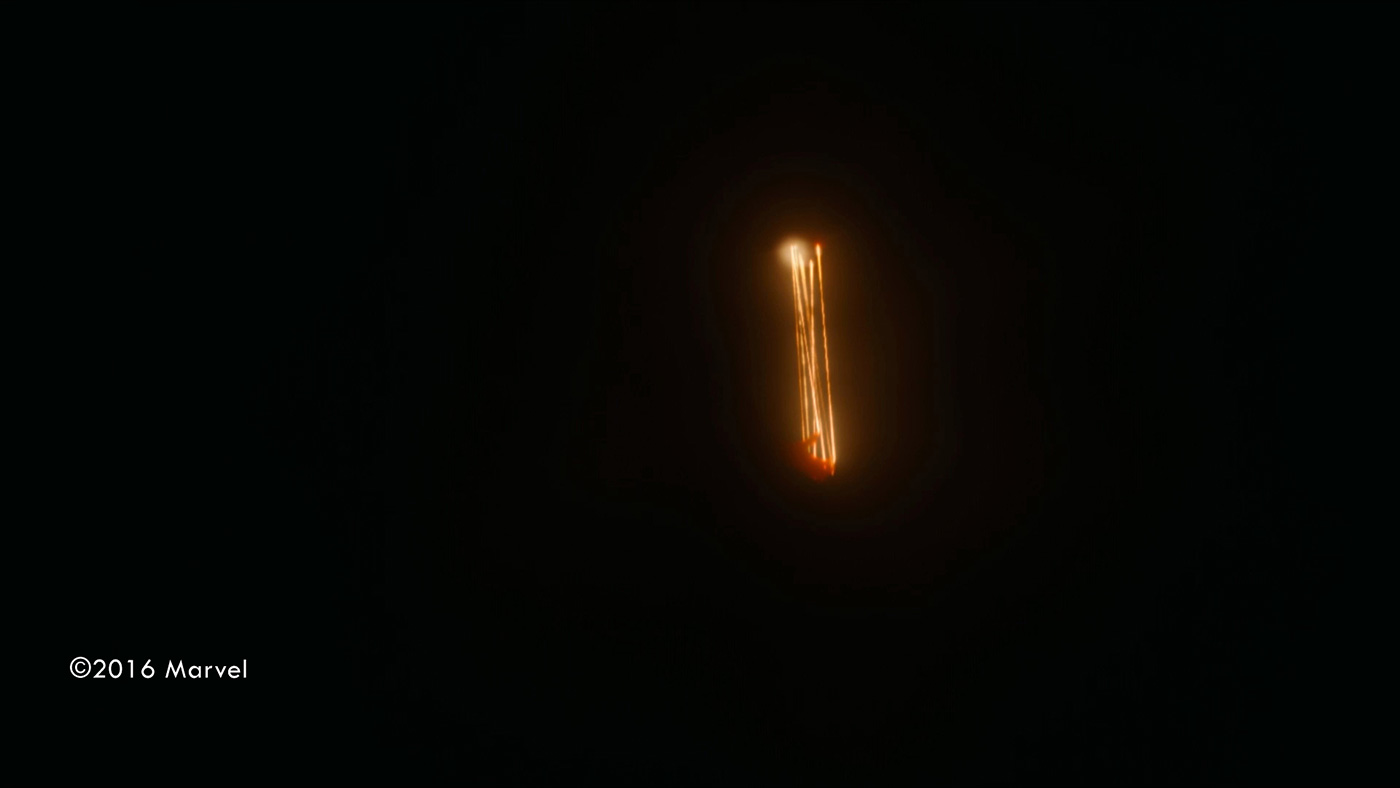 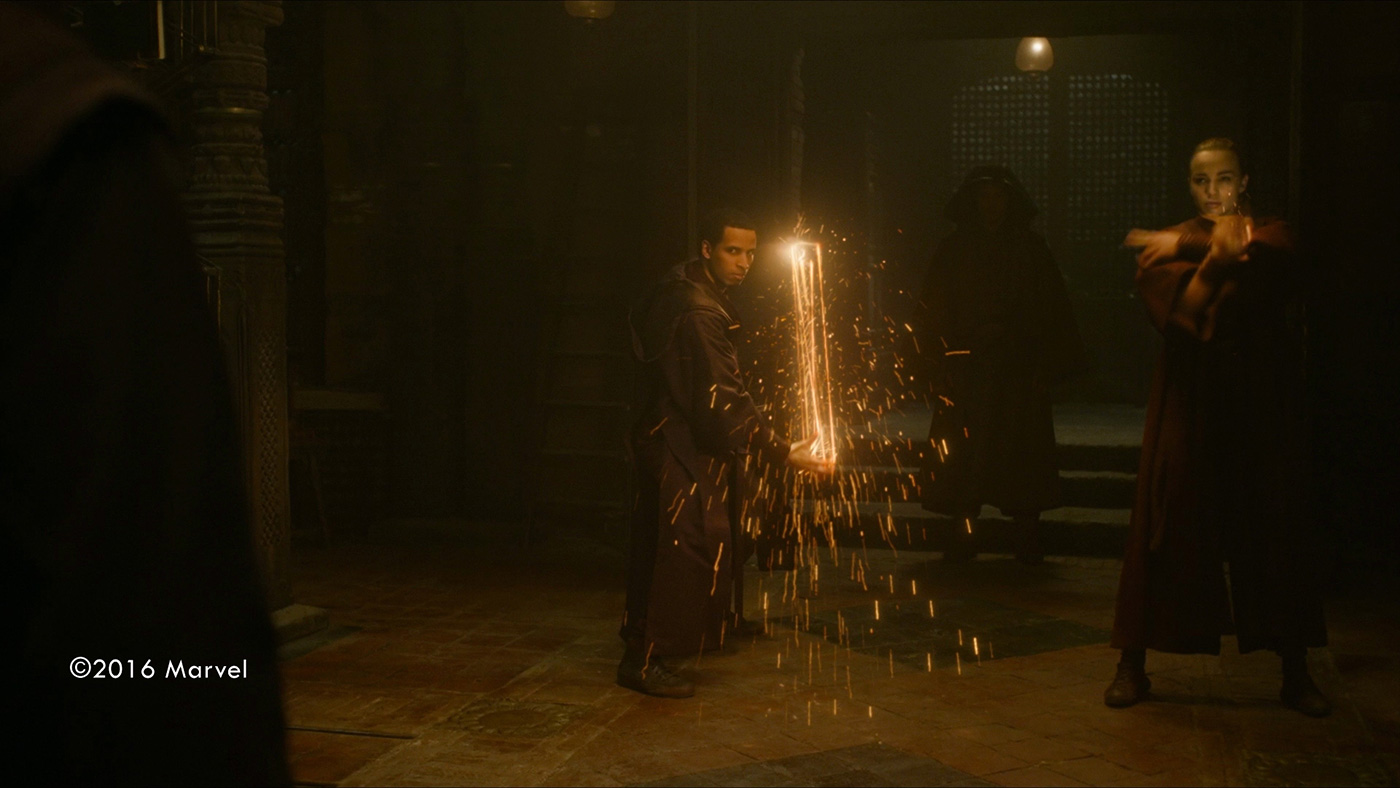 Which references and indications did you receive for the magic?
An early test of ILM served as our starting point. From there we mostly looked at high-speed footage of all sorts of sparks and embers with different shutter angles, open fires to see how the light would scatter in the smoke and also just motion blur references of actual whips being cracked.

There is also magic on the books. How did you create it?
The magic inside the book seals was created using the Nuke planar tracker, some roto, fractal noise, color corrections and glow. It really boiled down to varying the speed of the noise to be subtle but still alive and to sell it as a light source.

Can you tell us more about your work on the portal?
Method Studios and Luma Pictures had already created some very successful portals. We took the plate of one of Method’s shots, animated the guides for the portal in Maya and created the sparks in Houdini to match exactly what they did in their shot. After that we could use our portal setup in three other shots, including the one where Strange and Mordo use it to get to Hong Kong. We varied the speed of the sparks and the rotation of the portal on a shot by shot basis, added a Pyro smoke sim on top that would give us the necessary dust blowing through the set and illuminated everything with the color values of our particles. 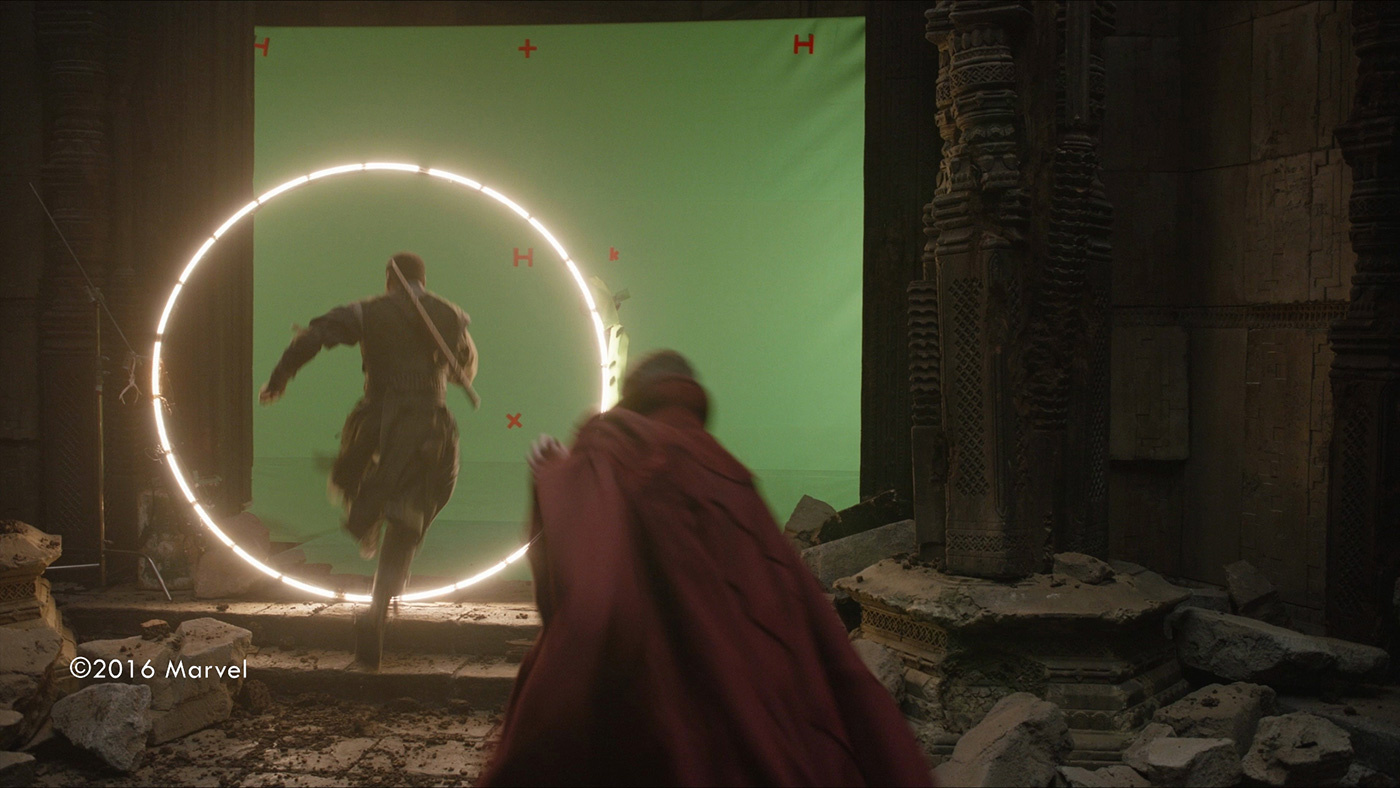 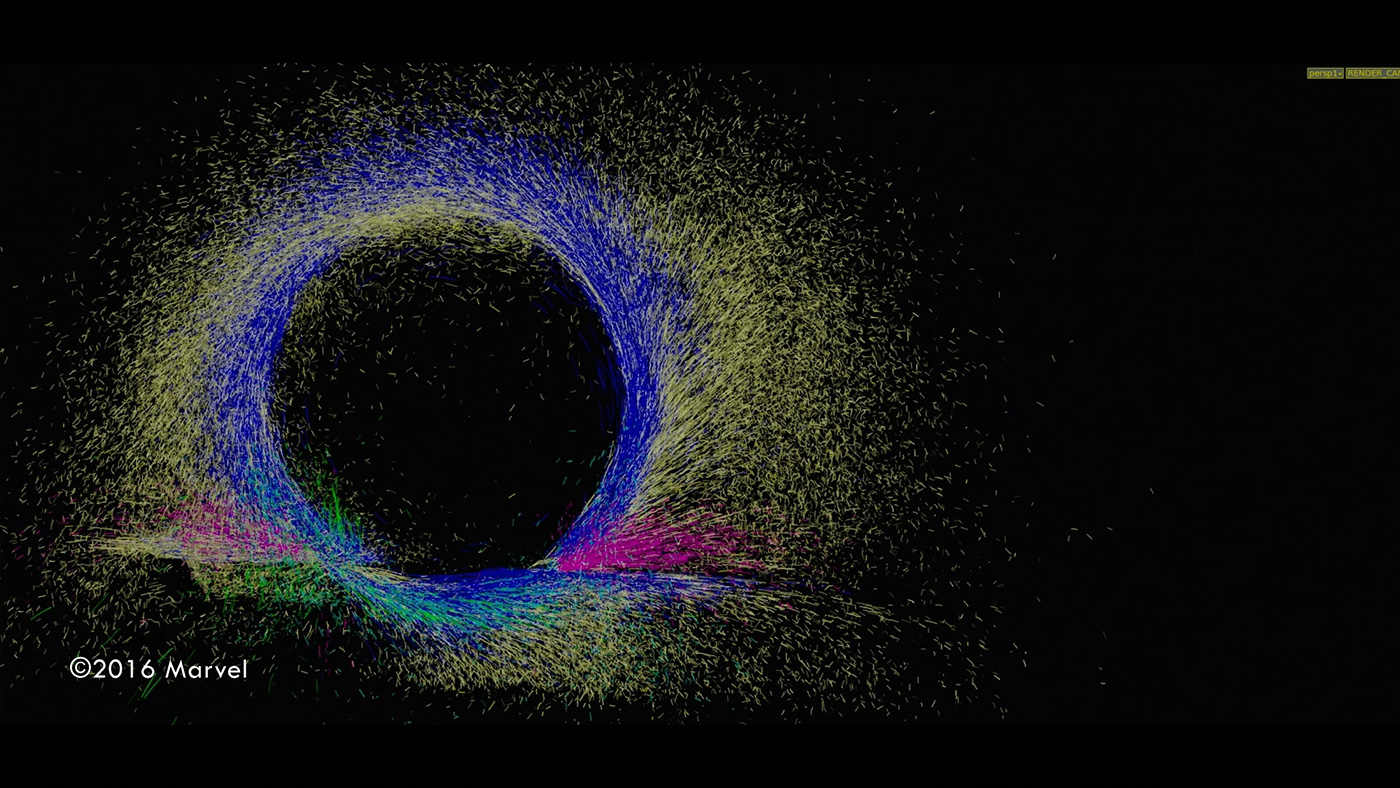 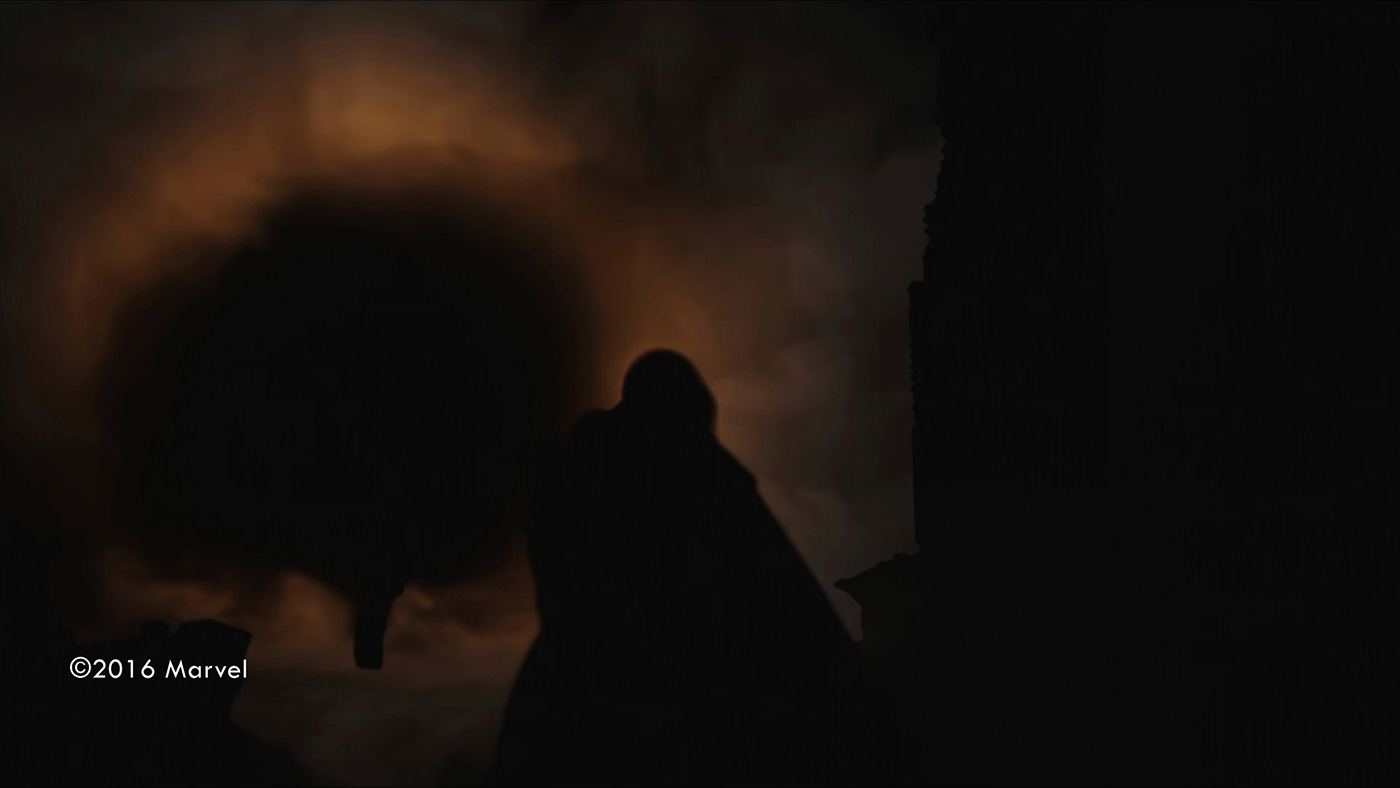 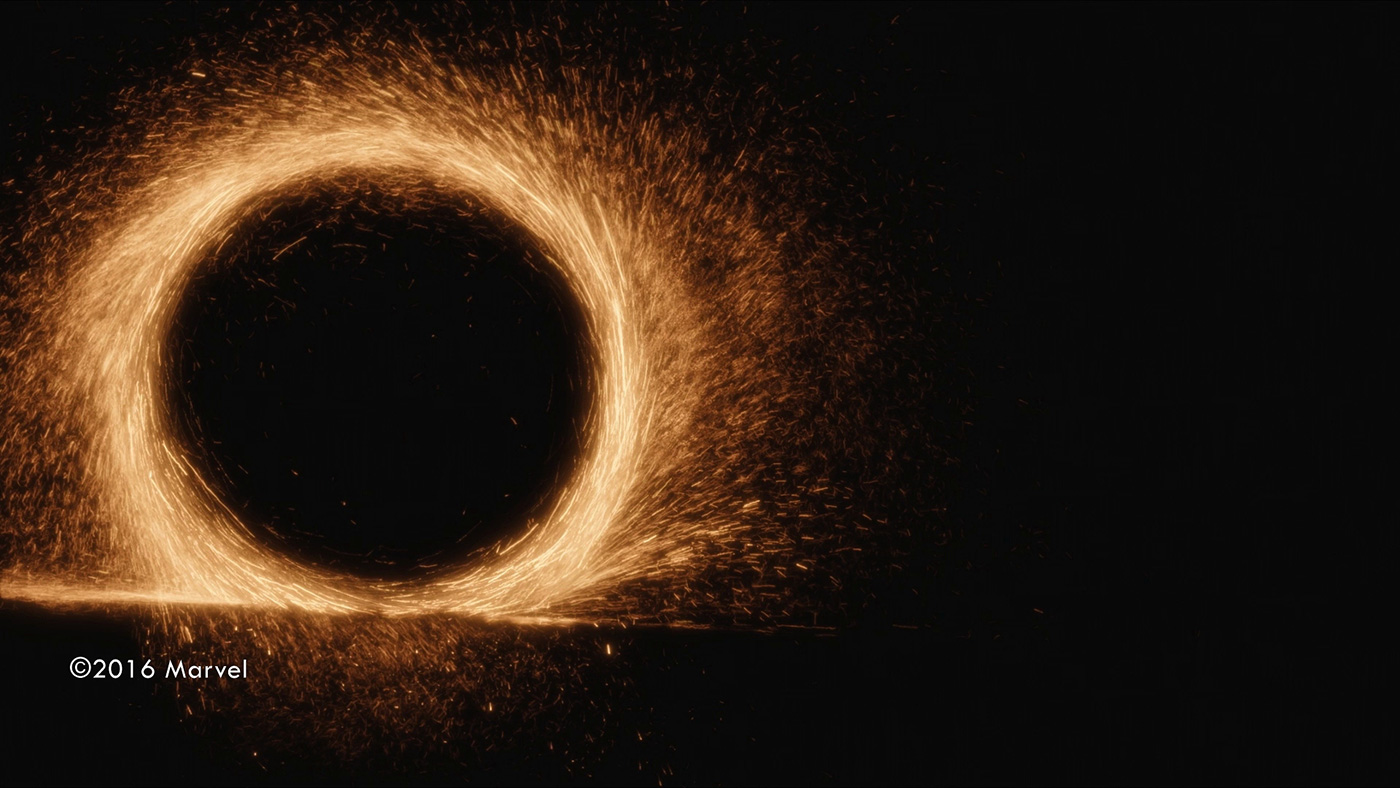 Was there a shot or a sequence that prevented you from sleep?
The trailer shots were very challenging because we needed to start from scratch with research and development for the simulations while at the same time we needed to iterate quickly on the individual shots.

What do you keep from this experience?
Never underestimate the complexity of motion blurred dots.

How long have you worked on this film?
3 months.

How many shots have you done?
We worked on a total of 88 shots.

What was the size of your team?
We had 44 artists working on Strange.

What is your next project?
I’ll tell you next year 🙂