Jason Smith began his visual effects career in 2013 at Industrial Light & Magic. He has worked on many movies such as STAR WARS: EPISODE III – REVENGE OF THE SITH, PIRATES OF THE CARIBBEAN: DEAD MAN’S CHEST, TRANSFORMERS and RANGO. As Associate VFX Supervisor and VFX Supervisor, he took care of the effects of films like THE AVENGERS, WARCRAFT, KONG: SKULL ISLAND and TRANSFORMERS: THE LAST KNIGHT.

What is your background?
I’m a Visual Effects Supervisor. My background is mostly creature visual effects. I was a rigging and simulation artist before starting work as a VFX supervisor.

How did you get involved on this show?
I have worked on a few TRANSFORMERS movies in the past, and I think that set me up to work on this one. Even though some of the challenges are new, many are familiar, and we can use the lessons we have learned making TRANSFORMERS over the last decade.

How was the collaboration with director Travis Knight and how does his animation background helps him on this big VFX show?
Working with Travis was really great. He’s very collaborative creatively, which makes a project like this a very satisfying artistic experience. He’s an animator himself, so he really speaks that language very specifically and constructively. His viewpoint as an animator really helped bring Bumblebee to life. 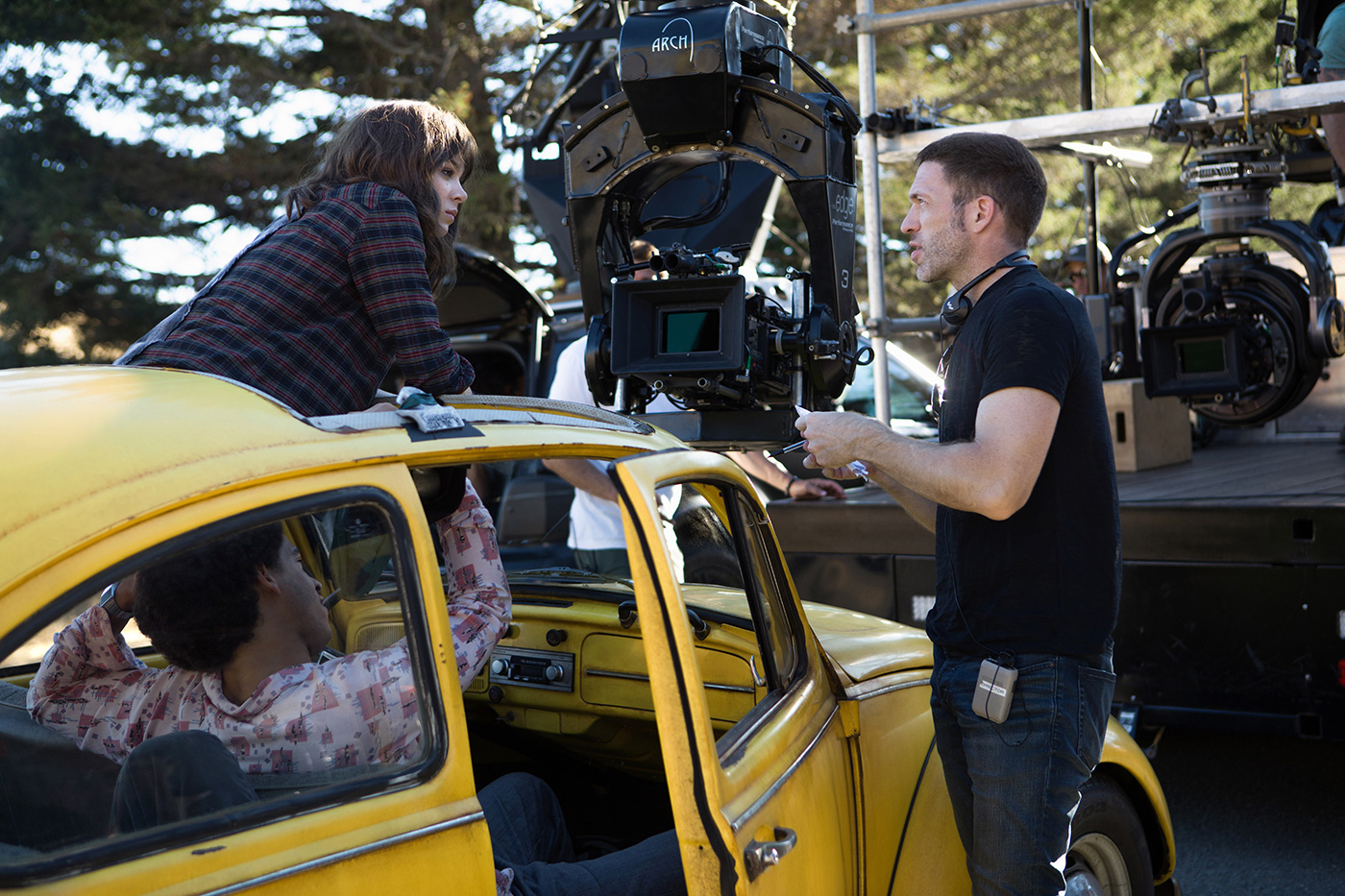 What was your feeling to be back in the Transformers universe?
I was thrilled to come back to TRANSFORMERS! Especially since we got to focus on my favorite Autobot, Bumblebee. It was especially exciting coming back to this universe in a movie that’s so much about characters. Taking a slightly different view of this universe is satisfying.

How did you organize the work with your VFX Producer and split the work amongst the ILM offices?
Visual effects producer Ron Ames was my close partner in setting up the entire show and distributing work in a way that made the most sense. The bulk of the work went through ILM, with Cantina Creative handling motion graphics, and an in-house comp team on the production at Paramount handling hundreds of 2D fixes. ILM partners included Base FX, Rodeo FX, and Scanline FX. Can you tell us more about the previz and postviz work?
Travis is always very specific about animation. So previz and postvis were very useful for us just in terms of locking down the blocking enough for editorial to cut the scenes. Previz brought a lot of value in helping us plan the shoot and aerials specifically.

The movie opens on a major battle on Cybertron. How did you create this vast environment?
We only had a small amount of time to create the battle on Cybertron, including creating dozens of new robots. Every single day of production, we needed everyone’s work to come together flawlessly. It felt like watching my entire team play a perfect game of Tetris for six weeks without a mistake. No one was more amazed watching everything come together than the crew, I think.

The Transformers have a different design in this movie. How did you work with the art department about that?
We tried to pull as many details and cues from the toys and the cartoon as possible. Travis is a fan of the classic G1 designs, so we had the exciting opportunity to explore versions of these characters with those traits. Some robots were designed primarily by the production art department, while others were designed internally at ILM’s art department. I heard from many different artists that they were living their dream creating these designs and assets. Can you explain in detail about the creation of the various Transformers?
The teams of artists handled the creation of each robot like kids on Christmas morning. Design feeds to model, which feeds to paint, lookdev and rigging. Finally, animators bring unique personality to each robot. Many artists were working on their own adding upgrades and improving details just out of the love of the franchise, and the desire to rise to the challenge for the fans. We tried to keep things efficient, sharing some geometry and rigging across background robots where possible. What the main difference with the Transformers from the previous movie and this one?
This film is a smaller story. It’s more of a character film than epic science fiction. It’s really sweet, earnest film, mirroring Bumblebee’s own personality.

Hailee Steinfeld has a lot of interactions with Bumblebee. How did you handle that challenge?
Interactions between Hailee and Bee were one of the biggest challenges for us. We had to sell those moments or risk destroying some of the emotional heart of the film. We built some practical Bee parts for her to interact with, and that was a huge help. We had foam Bumblebee hands, and a head and torso she could interact with, and even hug! But in the end it really was a lot of painstaking work matching shadows, locking down tracked objects, and simulating bounce light that got us there. How did you simulate the Transformers presence on set for the actors and the crew?
For Bee, we built a full size head and torso with attached upper arms. That prop was very hero, painted the right colors, and even aged in the same way as the car. This was a huge help on set, because everyone from the director to the camera operator can see exactly where Bee is and how he should be framed. 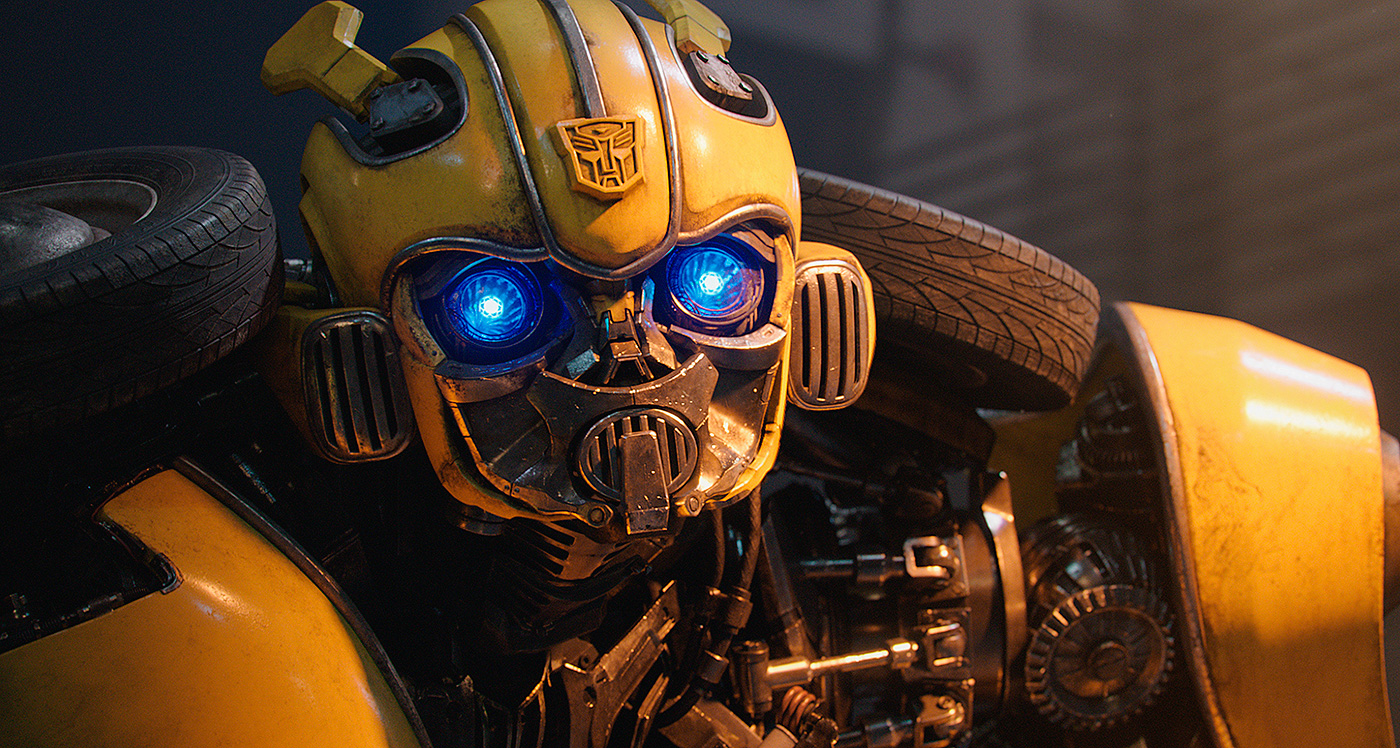 Can you tell us more about the various textures and shaders for the Transformers?
Since these robots have larger surfaces than in the past, the look of the materials in paint and rendering became even more important. Paint Supervisor Alison Farmer and her team, layered on dirt, oxidation, water streaks, and other weathering, always being careful to keep things from getting too busy again. Lookdev Supervisor Anthony Rispolli set up a new treatment of our specular highlights that allowed them to smoothly change size across the surface as a function of the smoothness of the surface. This adds a nice level of complexity as light rolls across a large panel. Did you received specific indications and references from the director for Bumblebee animation?
Travis worked with some of his favorite collaborators at Laika to storyboard the key sequences. Instead of the few dozen storyboards we would normally get on a sequence, we received hundreds, which in the end formed a basis for timing, mood, posing and performance. I can’t overstate the beauty of these boards. They had so much heart and charm already at that stage. Bumblebee has really expressive eyes. Can you tell us more about that?
It’s always a challenge communicating emotion in a character that can’t talk. Animation Supervisors Scott Benza and Rick O’Connor reviewed movies from the past featuring mute characters, to start. And Bee doesn’t really even have a mouth we could use for expressions like a smile or a smirk. So everything came down to his eyes. We gave the animators dozens of controls so that they could use every possible advantage to create an emotional performance. Interestingly, Travis asked us to reference Hailee Steinfeld’s facial performance and have Bee mirror it at times. She’s an amazing performer, with a lot of subtlety in how she uses her face as well. It was a very interesting note for us to receive from Travis. That subtlety fed into Bee’s performance and I think it really worked well. The Transformers are seen in various light conditions. How did you manage this aspect?
On this film, we resolved to really respect the lighting on set as a starting point, and then add creative lighting from there. Always on the base of reality. We built a practical prop of Bumblebee’s head and shoulders at life size scale. That was incredibly useful because all the materials were hand detailed to match exactly what Bumblebee’s materials should be, including metals, chrome, and car paint with rust, oxidation and weathering. This prop allowed our DP, Enrique Chediak, to help inform the lighting of the robot right there on set. It became a real collaboration between us, which is an ideal situation to be in. I was excited to have the opportunity to see Bumblebee in some unique lighting situations we don’t normally get to see the Transformers in, like the overcast beach, and the soft house interior. How did you work with the stunt teams for the various fight choreographies?
We collaborated with a stunt designer specifically for the fights. Their team designed some really incredible moves, which we shot with motion capture. Scott and Travis made selects from that material, and rolled it into the fights at the end of the movie. We really wanted to avoid a boring fist fight, and the stunt team did not disappoint. They got the entire bodies of the robots involved, and they were able to show the size difference and personality of the characters in how they fight. For example, Bee, with his smaller size, tends to use his size and speed as an advantage, going for takedowns to get the larger bots down to his level. The vendors are all around the world. How did you proceed to follow their work?
Luckily, we have an amazing production team on the show at ILM. They keep the machine running by scheduling reviews and updates, and downloading all the media from vendors for review. In the end, for me, it feels pretty similar to reviewing work by someone down the hall at ILM, which is a testament to the production team. This becomes very important near the end of the schedule when I’m reviewing hundreds of shots a day. Which sequence or shot was the most complicated to create and why?
The Cybertron sequence came to us very late in the schedule, and we had to create the entire sequence and the extra robots required in about 6 weeks. It was a huge challenge just in terms of complexity and the short timeline.

Is there something specific that gives you some really short nights?
Not in post, surprisingly. But there were some days filming on set where first unit was shooting days and second unit was filming nights. At times, I wanted to cover both if possible, so that led to some nights with little sleep. What is your favorite shot or sequence?
I’m very partial to the scene between Bumblebee and Charlie in the garage where she tells Bee about her father. It’s really nice for me to watch that and feel real emotion between the two characters.

What is your best memory on this show?
We had to shoot some aerial helicopter VFX plates on the Golden Gate Bridge. It was really amazing flying around the bridge in a helicopter at sunrise looking down on my morning commute! How long have you worked on this show?
I think from the first meeting to the last marketing delivery, it was about two years.

What’s the VFX shots count?
About 1500 shots total, with about 400 handled by our in-house team alone.

What was the size of your on-set team?
Our core team is three people on a normal day, with another 2-3 in production.