In 2013, Stuart Lashley explained to us the work of Prime Focus on THE LAST STAND. Then he joined Double Negative in 2014 and took care of the visual effects of THE HUNTSMAN: WINTER’S WAR and THE DANISH GIRL.

How did you and DNEG get involved in this show?
Double Negative has a long history of working with Edgar Wright. Since SHAUN OF THE DEAD, Dneg has been Edgar’s go to VFX facility.

How was the collaboration with director Edgar Wright?
Working with Edgar was extremely enjoyable and rewarding. Edgar plans his shots meticulously through script, storyboard and animatic. Having this level of preparation there from the outset made the planning of VFX shots much more efficient. For someone with such a clear vision of what he wants, he is also very open to creative ideas from the people he’s working with. Bringing a concept like this to the screen took a lot of collaborative problem solving and it was great to be a part of that process.

What was his approach and his expectations on the visual effects?
Although VFX has played an important role in all of Edgar’s films he remains strongly devoted to traditional film making and real stunt and special effects work. One of the first discussions I had with Edgar was about the role that VFX would play in BABY DRIVER. It was always the plan that this movie would showcase real stunt work and real driving as much as possible and we would use VFX where needed to support the practical work and allow the stunts, SFX and camera teams to push the envelope as much as they wanted.

The second main role of VFX would be to enhance the rhythmic synchronisation that appears throughout the film. Again, every effort would be made to achieve as much of this in camera as possible, and we would then retime or augment environments to enhance the on set choreography in ways that could not be achieved practically. Much of this work is very subtle in the finished film but the more you watch it, the more of it you’ll notice.

Can you tell us more about the previz process?
There was no traditional 3D previs done for VFX on this film. Every shot in the film had been blocked out by Edgar in either 2D or pseudo 3D animatic form. He was able to sit all of the department heads down and present a cut of the whole film as an animatic with sound and music before principle photography started. It was quite incredible.

As far as the VFX planning was concerned, any tricky shots that needed further visual blocking ahead of the shoot were generally done by shooting tests with the stunt and SFX teams and doing some postvis work with that footage. The car stunts are impressive. How did you collaborate with the stunt and SFX teams?
We got the chance to work really closely with the stunt and SFX teams. There were lots of preproduction meetings sitting around a selection of toy cars trying to figure out how to execute some of the more complex shots within Edgar’s imaginative chase sequences. With the brief to keep things as practical as possible, and neither the post budget or desire to use extensive CGI, it was important for all departments to work together and figure out the most effective use of each discipline. We tried to use VFX to help get incredible shots in camera. We looked at where we could use face or stunt driver replacement, how we could use complex practical rigs to put the cast in the action and remove or augment those rigs later, or where we could plant multiple cameras to get right in the action and have those removed in post. Can you explain your work on these sequences in detail?
To give a few examples:

In the opening chase sequence there are a few background CG cars inserted into various shots in order to fill in the odd space and help maintain the pace. There are a couple that pass Baby as he sits outside the bank and a few in the distance on the freeway. There’s the spike strip slide manoeuvre that needed a digital spike strip to be inserted. The aerial shots were a combination of digital cars and a practical helicopter that was shot as an element and augmented with CG blades. There’s a whole load of tire track clean up and the odd face replacement where stunt drivers or passengers were a little too visible. And finally throughout the sequence there are street features such as pillars and bushes inserted to whip past camera in perfect time with the music. 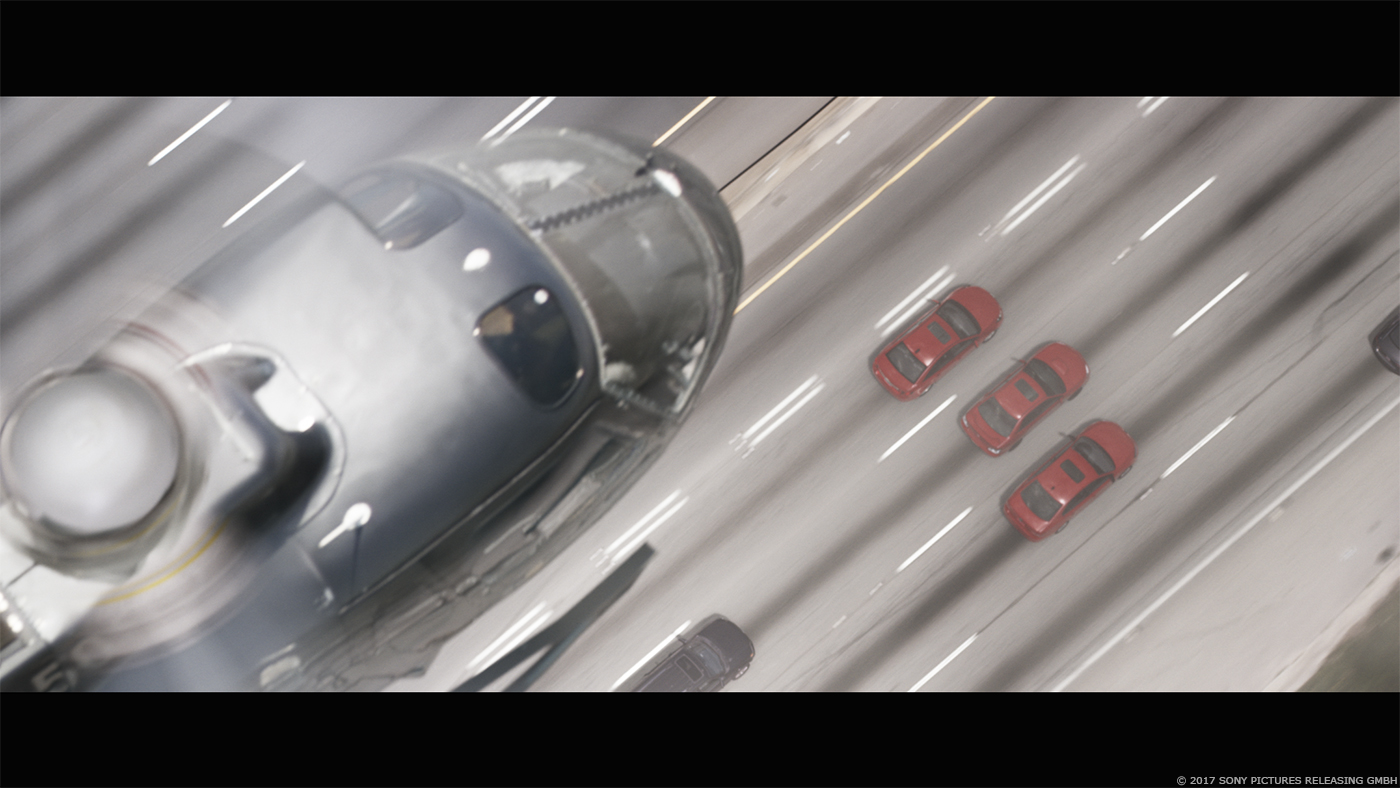 In the freeway truck chase sequence, the shots where the truck gets pinned under the lorry are actually done completely in camera with a very impressive SFX rig that performed the move at full speed with real vehicles and the real cast. For the exterior shots we needed to replace part of that rig with CG wheels, adding smoke and sparks to enhance.

There was some CGI gore enhancement for one particularly painful moment involving some rebar poles hanging off the back of a lorry.

The Tequila shoot out took muzzle flash and bullet hit addition to the next level. Every flash, spark and hit that was added had to fall on the beat of the soundtrack. The result is one of my favourite sequences in the film.

There’s quite a lot of water and rain addition particularly in the final stand-off where most of the sprinkler water falling on to car windscreens is digitally added. This sequences accounted for a large share of the VFX work in the movie including stunt driver replacement, split comps for near misses, greenscreen driving comps, CG cables, lot’s of CG smoke, set extension and a falling CG police car. 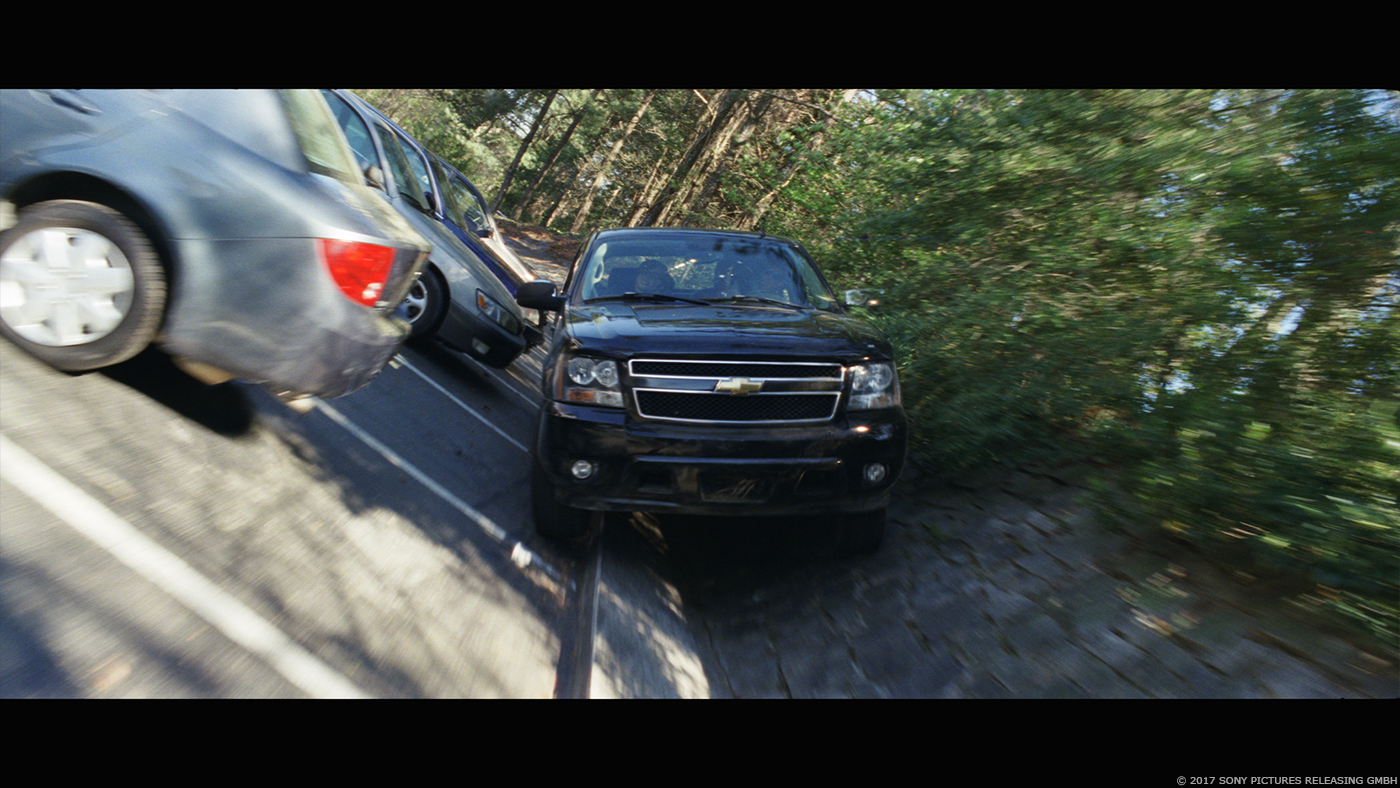 Can you tell us more about the cars creation?
Any CG cars that were required were based on production vehicles that we LIDAR scanned on location so they could be recreated digitally later.

How did you manage the lighting and animation for the cars?
Lighting the cars was pretty standard for the most part using lighting reference collected at the time of shooting. Because any CG cars that were added were there to play a supporting role, any animation cues will have been taken from the action that existed in the plates. The CG vehicles don’t do anything out of the ordinary and were designed to blend in without being noticed. 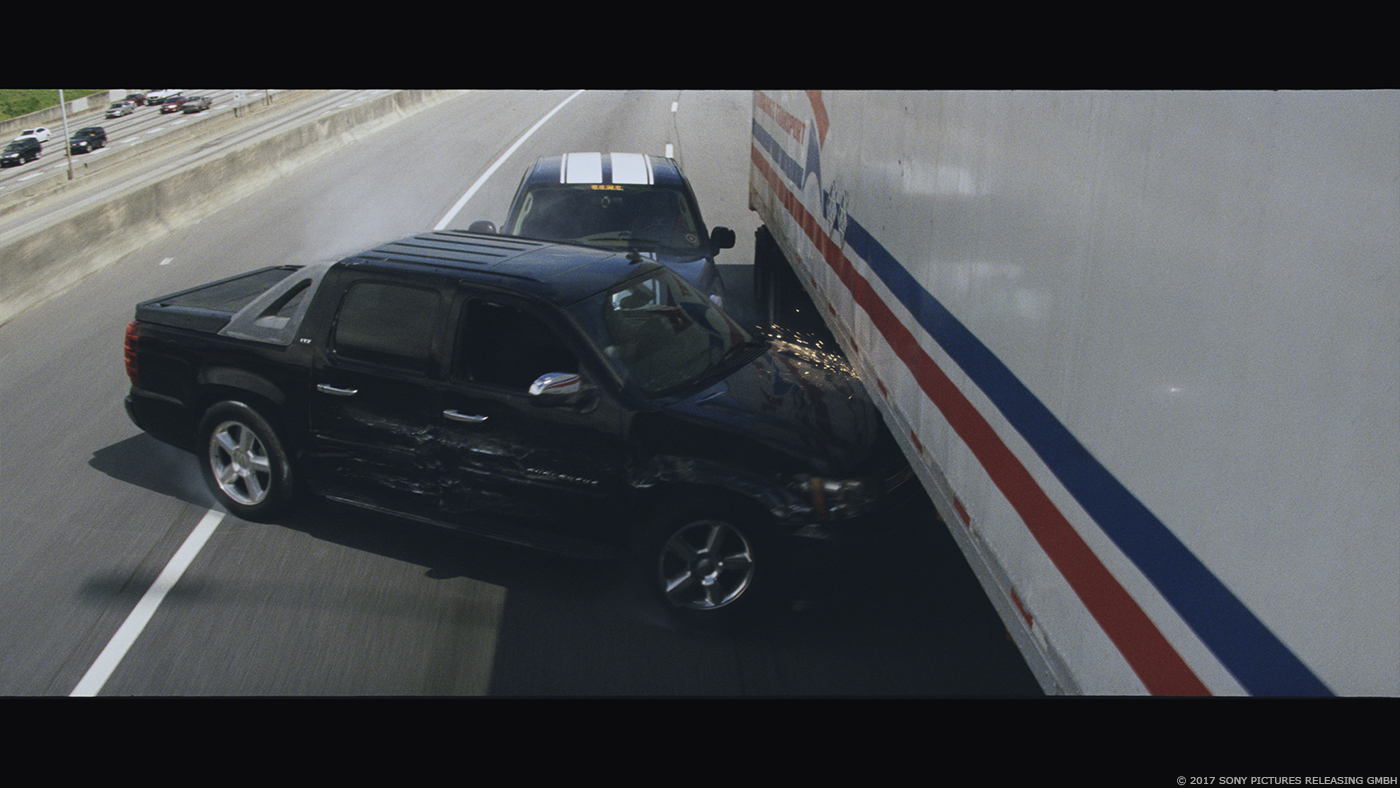 Which stunts were complicated to enhance and why?
The spike strip gag was a bit tricky to pull off purely because it’s such a wild manoeuvre and defies the laws of physics. It took some serious figuring out up front by the stunts team just to make sure the car hit the right angles at the right time. It was quite unforgiving but they nailed it. The challenge in post was then to work out a movement to the spike strip that didn’t make it look like it was being motivated by anything other than the hit from the car. The result was a very cool looking Subaru trick shot. 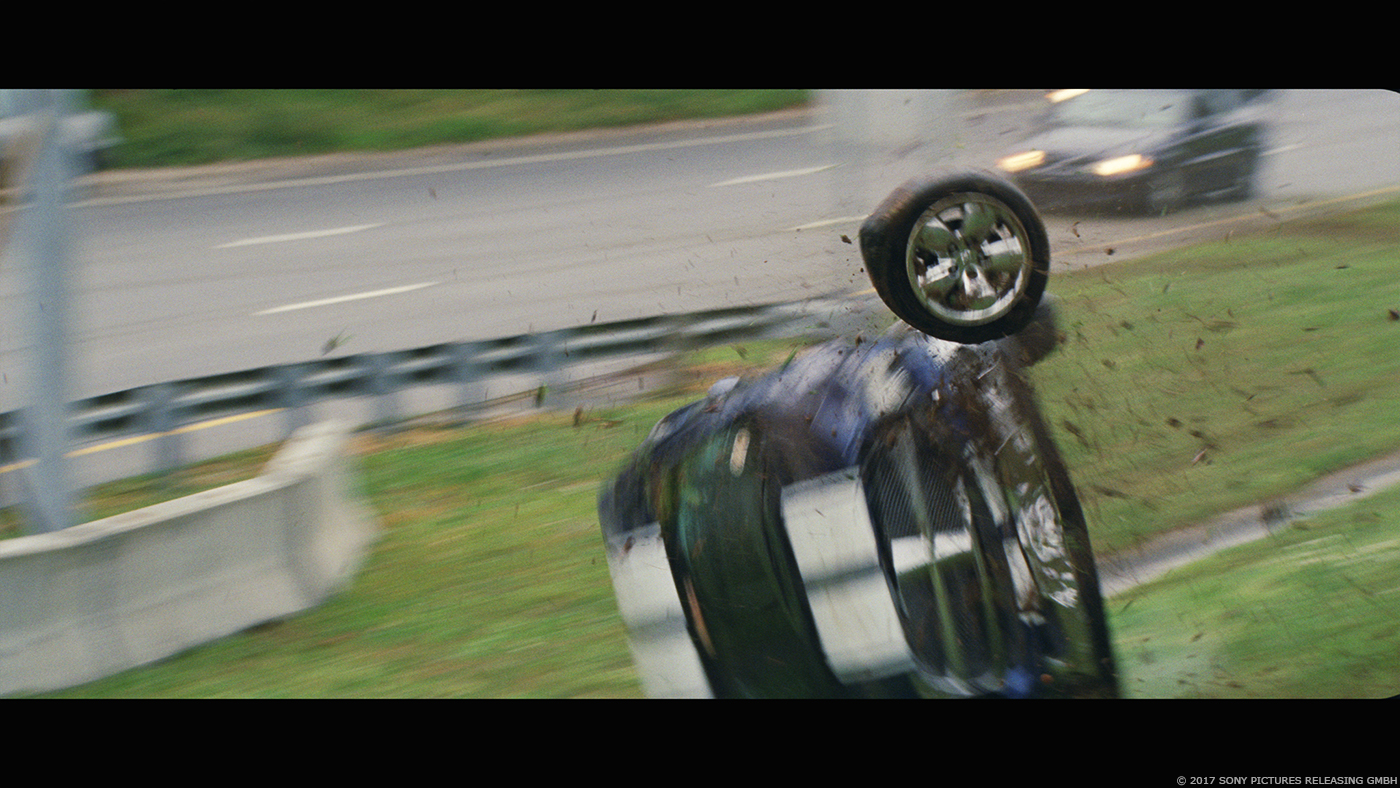 The film contains many long continuous shots. Can you tell us about your work on those shots?
Following the opening sequence is the Harlem Shuffle coffee run shot – and it is just one shot, impressively choreographed and shot without any digital stitching later on. Our job in this sequence was to add all of the graffiti you see passing by that mirrors the lyrics. This was done digitally to ensure that the words entered frame at just the right time.

One shot that did require a digital stitch is the one that finds Joe in his ransacked apartment. This shot starts as top down shot of the street below which was shot on location, and pulls in through the window where the second half of the shot is filmed on stage. This was done without motion control and it’s success relied heavily on the skills of Bill Pope and his camera team. How did you enhance the gore aspect of the show?
Edgar is a big fan of practical gore FX so this played a big part in any gore work that we did. For one of the main death moments we use a replica dummy from KNB, filled it with blood and fired a set of rebar poles at it at high velocity. The camera angles were planned so that we could combine elements of the practical effect with live actor performance and CG to brutal effect. 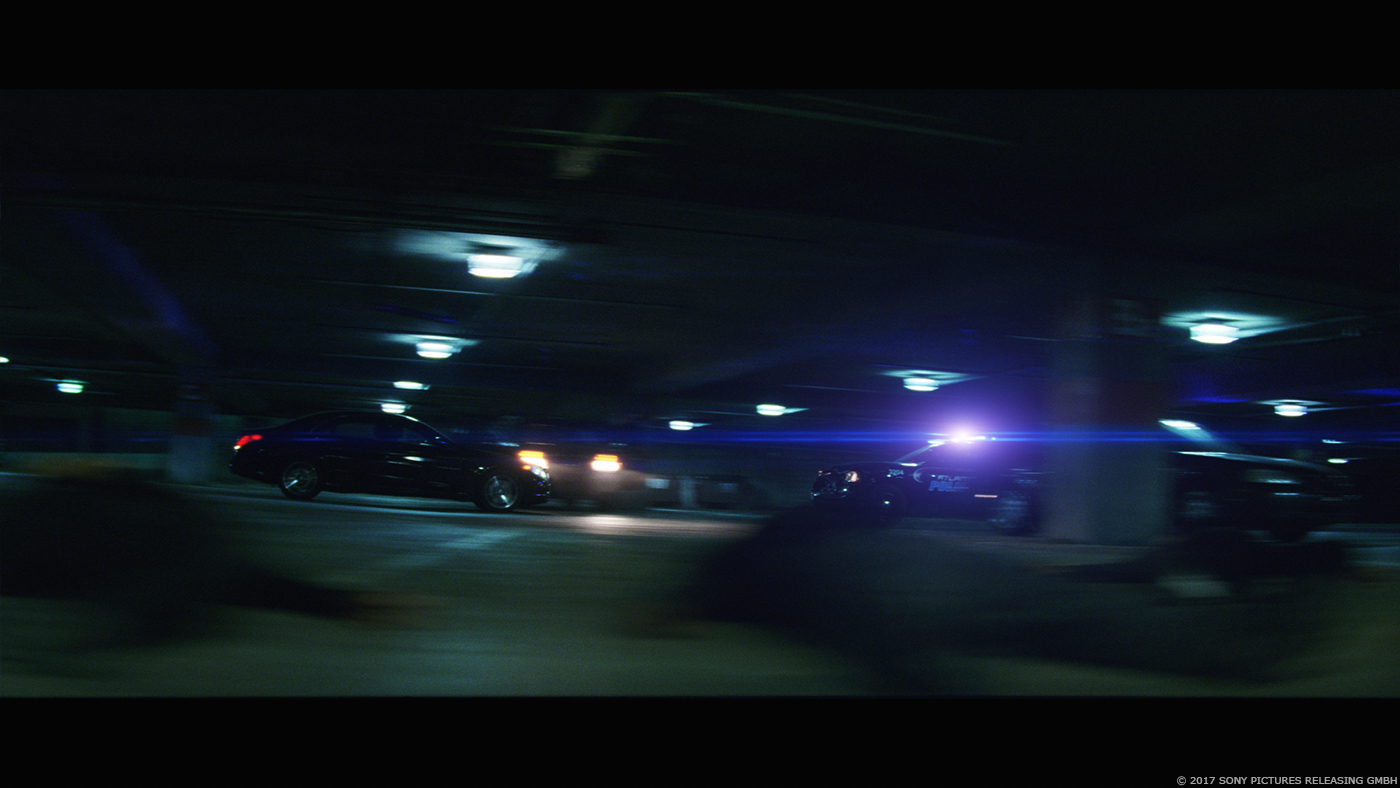 The final sequence happens in a big parking place. How did you recreate it?
The environment for most of that sequence is completely real and in camera. We spent many nights in a multi-storey car park in downtown Atlanta shooting the chase and stand-off scenes. It’s only once we’re on the top floor looking over the edge that it becomes a digital set extension. They had to cheat the location of certain stunts for reasons of logistics and safety so some digital alteration was needed for continuity. We LIDAR scanned and photographed a large section of the car park in order to rebuild it for these extensions. 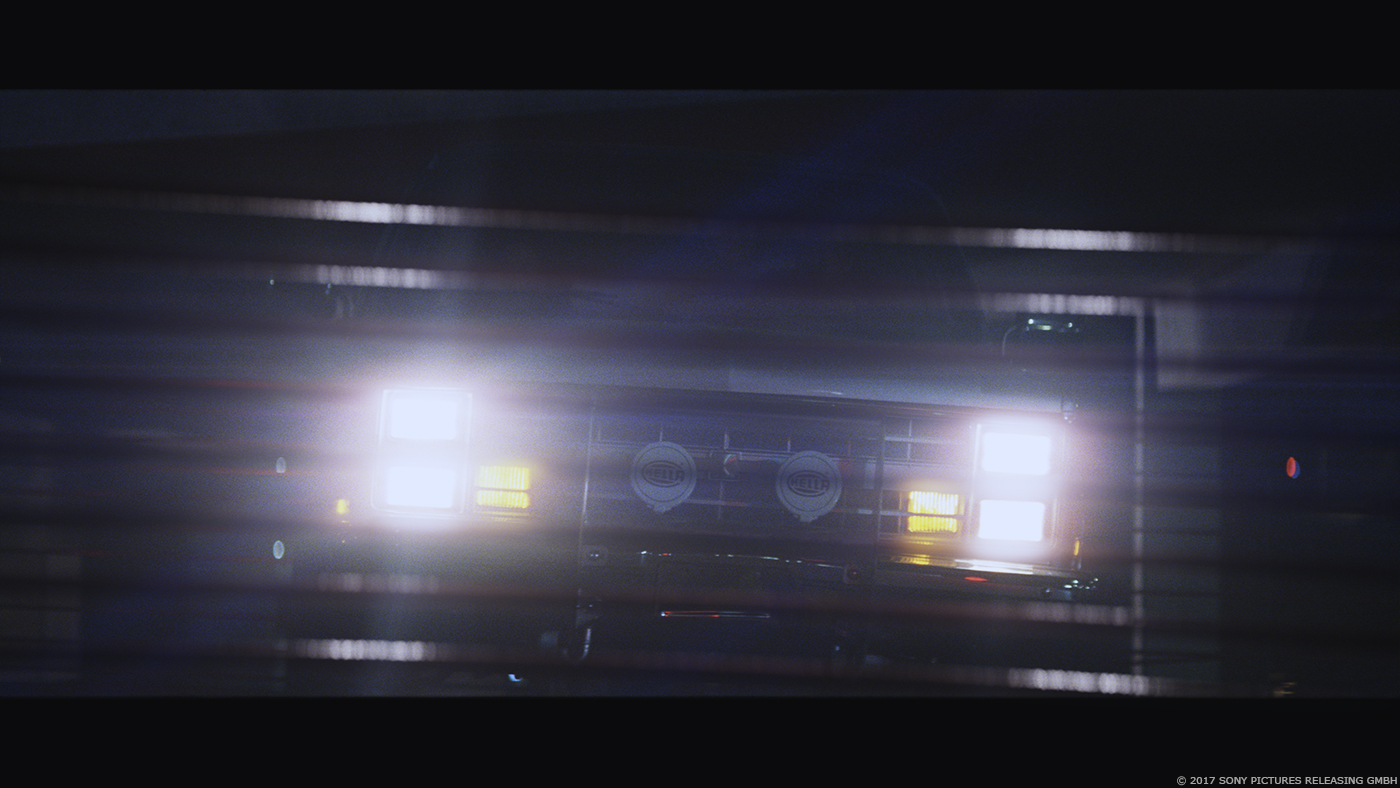 Are there any other invisible shots you want to reveal to us?
Not so much an invisible addition but there are some nice moments where the camera is pointing directly at mirrored surfaces which you don’t necessarily think of as an effect at the time but obviously the camera and crew reflections had to be removed. There’s a very cool spinning chrome hub-cap shot.

What was the main challenge on this show and how did you achieve it?
The music sync elements were quite challenging. It had to read without being overly obvious. It took a lot of back and forth with editorial to pin down. What is your favourite shot or sequence and why?
The head on lorry collision is a particular favourite. I liked it because of the old school way it was executed. It’s all comp work combining actors on a greenscreen with a practical crash done with rubber dummies.

What is your best memory of this show?
Planning the work and concepting ideas at the start was fun. Pre prod meetings would often end up with Edgar just showing us loads of clips he loves from old films. 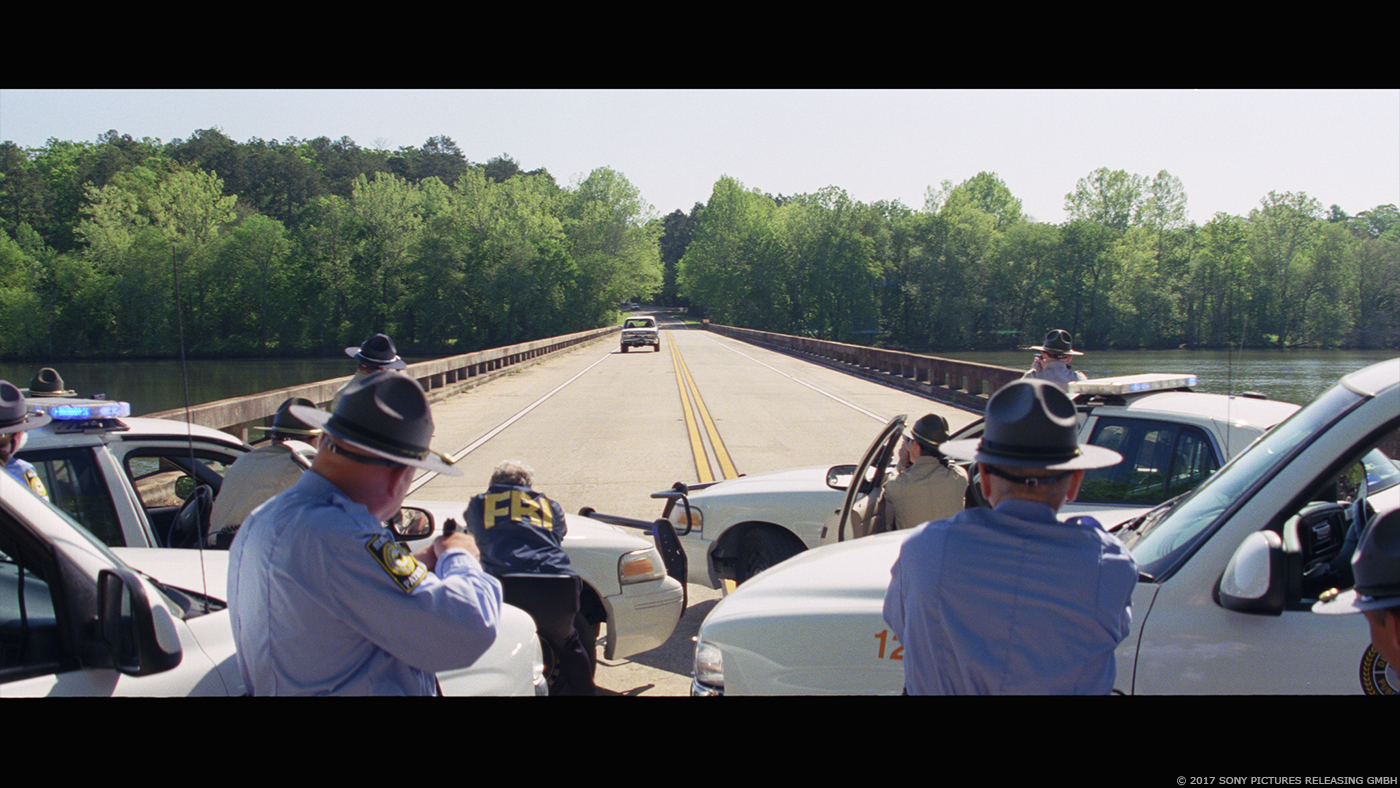 How long did you work on this show?
I was on it for about a year.

What is your VFX shots count?
About 450 VFX shots ended up in the film.

What was the size of your team?
Around 120 artists and production crew.

What is your next project?
THOR: RAGNAROK.