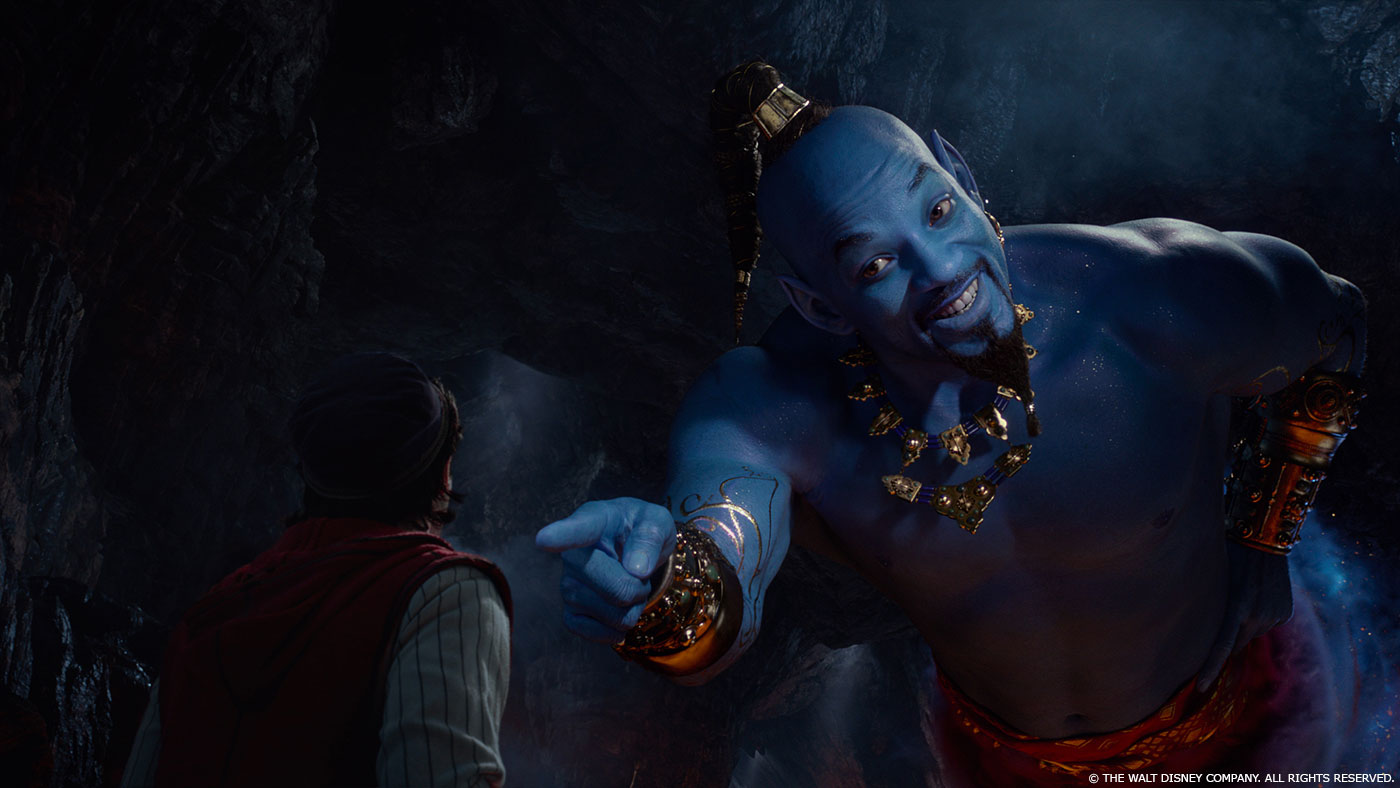 Chas Jarrett began his visual effects career more than 20 years ago at MPC. He took care of the effects of many films such as CHARLIE AND THE CHOCOLATE FACTORY, POSEIDON, SHERLOCK HOLMES and LOGAN.

How did you get involved on ALADDIN?
I’ve been lucky enough to work with Guy Ritchie on a number of projects previously. I did both SHERLOCK HOLMES films with him back in the late 2000s so we had a really good working relationship based off those two films. I was based in Los Angeles for a few years because I was working on this film called LOGAN for Fox and James Mangold. That film was in the height of post-production and I got a phone call from Guy – very excited about his upcoming project – ALADDIN. As soon as he got the show, he gave me a bell and said, “Listen, will you come back to London and do this show?” Obviously extremely exciting for me, I hadn’t worked with Disney before and the opportunity of working with Guy again and working on a high-profile Disney film was really exciting. Needless to say, I jumped on an airplane the next day and I was here in London working away on it. And I must say working with the same director a number of times has huge advantages and certainly makes the working relationship much smoother. Obviously, we know each other’s strengths and methodology, so it was very nice for him to call and I was very happy to take it.

Tell me about your working relationship with Guy Ritchie?
He is very collaborative in the sense he builds very good strong relationships with his core collaborators and he very much involves you and allows everyone to play to their own strengths. He is very instinctive; he is not really one to firmly lay out a specific vision at the beginning of the process. He enjoys the process of making the film and letting ideas come and the best idea will always win with him. So if you can bring something to the table that trumps an existing idea he will absolutely embrace new ideas. I hope some of the reasons he brought me onto the show was because we had a relationship that worked previously and the other collaborators surrounding him were all people I knew very well and had worked with him previously and I had been lucky enough to work with those guys too. So the group of us formed a friend trust of core creative collaborators. He very much just let us roll with ideas – try things out. Quite early in the project I brought on board some additional animators – 2D drawn animators – who approached the designer’s sequences in a way that we are not really familiar with in live action photography. They very quickly play with and stage ideas and bring together animatics that we would show Guy. And he loved working with those; he loved looking at the drawn animation and what that brought to the table – particularly with the genie – who was obviously such a big and expressive character.

On certain sequences he very much liked to let ideas flow creatively on set and not plan things too much in certain situations. Obviously, he had some really big song numbers and dance numbers that needed a great deal of planning and preparation. We had quite a large pre-vis team, about 30 people at one point, pre-vising some of songs, Friends Like Me in particular and A Whole New World – and he would come in to the pre-vis every day and look at what we were doing and throw out some comments and then just let us get on with it. How did it feel to be part of a team re-imagining such a beloved animation as a live action movie?
The honest answer is terrifying! Truly, truly terrifying! And certainly humbling. Terrifying because anytime you touch any project that people have such affection for you feel an enormous burden of responsibility to treat it respectfully and make the most of it. I certainly was very conscious of that and I think all of us were very conscious of that and I think all of us as filmmakers were conscious of the fact that there is fan base for that particular film – the original – which would potentially be hard to beat, but we were also very eager to see what we were going to do with it. So it was somewhat nerve wracking. And to be honest with you challenging. Certain storytelling techniques and ideas work really well in an animated feature and they don’t necessarily transcribe well into the live action genre. So, there was some creative development, playing with different ideas and seeing what would work in a live-action environment – or not. There was no point trying to copy or outdo Robin Williams and the performance from the original film. We always knew we would have to take it in a different direction. But we were going to make something a bit more photo realistic and there are certain character traits from the original – the squash and the stretch and the shape shifting that are actually quite difficult to do in live action – they are quite creepy in some ways to look at. So we were quite conscious of those challenges. But I must say certainly one of the most exciting projects I have had the fortune to be involved in because it is so iconic.

The genie is a fan favorite. Can you tell us more about creating this character?
It was an interesting challenge because as I say the character of the genie is very playful, very elastic, very shape shifting. Lots of things that lend themselves very well to 2D animation, and in live-action something made of skin and bones, it doesn’t necessarily translate very well. So we did initially play with a more caricature version of the gene and it raised some interesting issues primarily to do with the likeness to Will. And of course, one of the things we realized very quickly is that Will Smith is an incredibly iconic actor and somebody that had an enormous fan base who knows exactly what his traits are and in truth by hiring such a fantastic and well-known actor you are hiring them for those traits. You are hiring somebody for who they intrinsically are. So what became clear to us quite quickly we actually needed to retain a lot of those traits of Will. We began to explore methods to capture his performance. We engaged with Disney’s R&D team to use some performance capture software, which they had developed called Anyma, which allowed us in very, very fine detail to capture Will’s facial performance. It became very clear to us the more we made the character look less like Will, the more caricature we went, the more difficult it became for the audience, for those watching the test shots we were doing, to connect it back to Will. It didn’t quite work – we felt we needed to retain as much Will-ness as we could – that’s why we have hired him. So we had larger versions of him – bigger nose and ears or different body shape, bigger head. We tried lots of different things and ultimately nobody felt entirely confident with those. We ended up returning more and more just back to Will’s facial likeness. In order to retain some of the expressiveness of the original character we lent more on performance through the scenes, the way we could have him whip and change sides, or whip around and present himself to camera in a way we could really enjoy the performance that Will was giving. It was a real challenge I must say. Ultimately, we felt we landed in the right place and we had the right mix of alternate versus the playfulness of the character.

Can you elaborates about your research into the world of Aladdin. Did you go on the location scout?
We originally scouted locations in Morocco. We managed some sequences in Morocco particularly the Agrabah streets and so on. I think Gemma Jackson the production designer felt very strongly as did I that we should try to base Agrabah on existing environments as much as possible. So she scouted widely in North Africa and found a number of cities, villages and towns, which she felt the architecture was a good fit for Agrabah. It wasn’t entirely in one place; there is mixing and matching of different environments. So we do enter on those scouts. We went to Jordan and Namibia and to North Africa. The visual effects unit sent photographers to capture as much reference as we could from those environments. We did helicopter and drone shoots in a few locations to scan the environments and capture as much reference as we could. It was very crucial that it didn’t look like a freshly built set or village. But also, at the same time, we tried to work with a very playful color palate. She was very clear from the beginning she wanted the color palette to be vibrant and bright. Thankfully there were lots of locations that gave us a lot of that.

Can you talk about the iconic flying sequence with the magic carpet?
That was an enormous challenge. A really interesting challenge as well. We toyed with various ideas at one point. We considered the journey taking place over the course of a whole day so they would leave Agrabah early morning and they travel around the world almost over the course of a day through a sunrise and a sunset. It worked well, but Guy felt quite strongly that he wanted it to all happen at night as in the original. So we took helicopter units to a number of locations to Jordan and Namibia in Africa and filmed elements – flying through mountains and certain environments that we liked and photography crews we couldn’t get helicopters to and capture reference and slowly build up a sequence, which was very local to the area. We wanted to make sure it felt like they were travelling through the Middle East and they didn’t travel too far. In the original I think they travel to China at one point, which for our film didn’t fit quite right. We wanted to keep it around the area of the Middle East and Agrabah. So we took all those helicopter plates, the photography and we re-created a lot of the environments and then built ourselves a mechanical flying carpet rig. We had our CG animators create movement in the computer, which we could then eventually transcribe to the robotic flying carpet rig – it copied the movement that our animators had created. This allowed us to synchronize the movement of the flying carpet that the actors were sitting on with the live action plates and the CG environment that we had built to go around it. So although the actors were sitting on a moving flying carpet rig, we filmed them on a green screen stage in the UK, the movements all synchronized well between the plates sand the actors photography. It is no mean feat to sing a song while you’re being bounced around on a flying carpet with a dozen wind machines blowing in your face. It was an interesting challenge to try and create an appealing world at night when you can’t actually see it – a lot of the colors disappear into blues and silvers and so on. It was challenging creatively from that perspective. But ultimately very successful and I think that sequence is one of my favorites in the film.

Note:
Aladdin is now available on Digital and will be released on Blu-ray September 10.