In more than 20 years, Kendrick Wallace has produced the effects of many projects such as MAX PAYNE, THE A-TEAM, ABRAHAM LINCOLN: VAMPIRE HUNTER or INTO THE WOODS. He talks to us today about his work on IT.

What is your background?
I’ve been working in film production for over 20 years now, having graduating college with degrees in art and film. My first feature film job was as a Set PA on the movie THE ABYSS (I had been working as a production assistant in the office of Gale Anne Hurd at Fox). That was also when I became interested in visual effects.

How did you get involved on this show?
I had been talking with Warner Bros for some time about working with them on a project, and the timing worked out well.

What was your feeling to work on the remake of this iconic character?
I knew that Andy was very keen on creating a film that respected the original novel, so I always felt like we were working on a project that would be a worthy interpretation of the book, but also have Andy’s unique perspective thrown in as well. 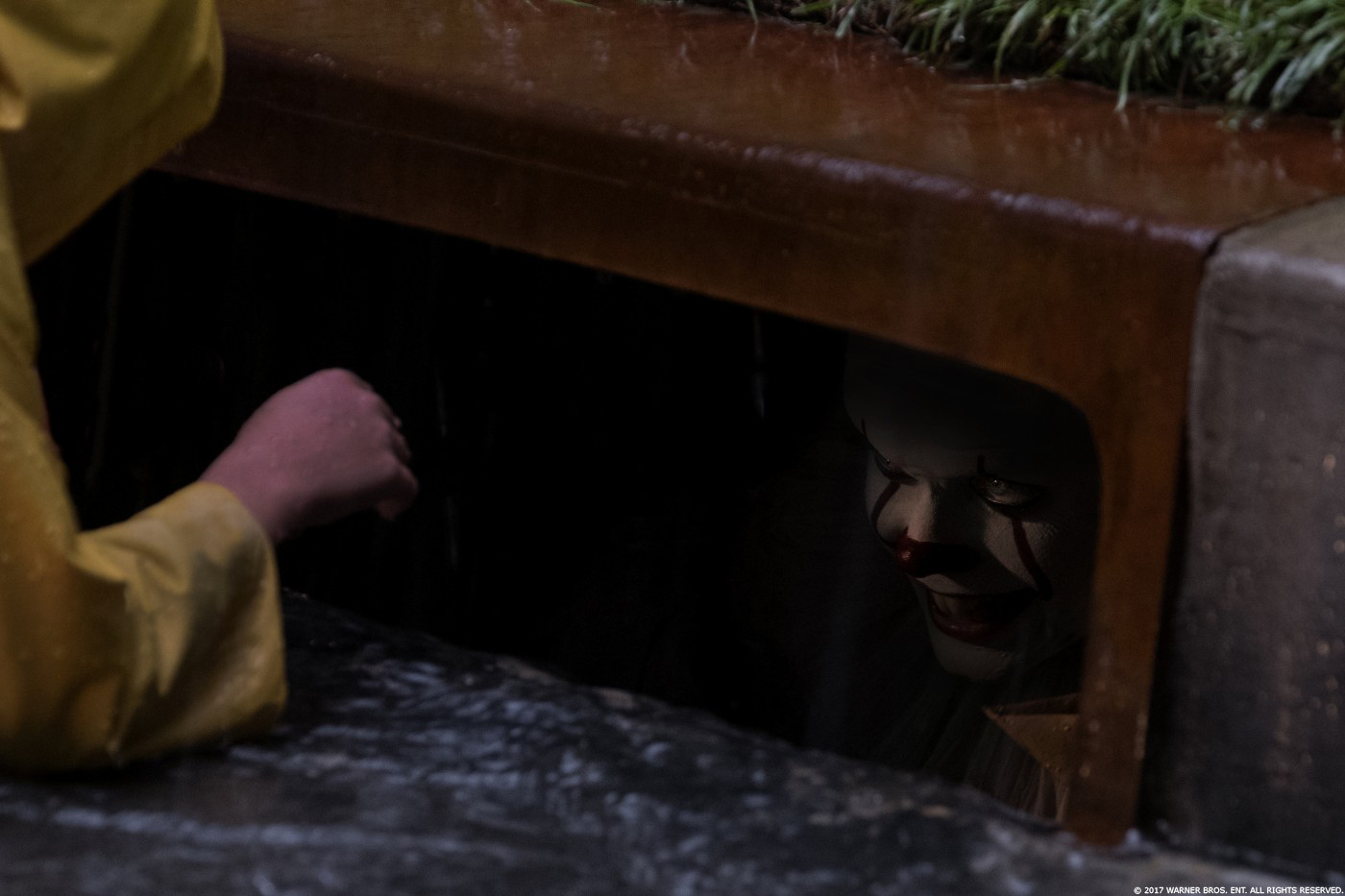 How was the collaboration with director Andy Muschietti?
Andy is very creative, but also very collaborative. He is always willing to listen to ideas from anyone on his team. Of course he ultimately makes the decisions, but he is also always willing to take creative input and alter course if he thinks someone has a good idea. He’s also just a really nice guy—always a smile and good sense of humor. And I don’t know how many people know this, but he’s a great singer and pianist. He’s a heck of a lot of fun at a karaoke.

What was his approach and expectations about the visual effects?
Andy likes to base the VFX on something real. We always tried to have something in-camera, even if we had to replace it later. This wasn’t a huge show so Andy was also very willing to take some chances on smaller boutique companies. That said, Andy has a great eye and expected top level work. He’s definitely a director who can articulate what he wants.

How did you organize the work with VFX Supervisor Nick Brooks?
The plan was always for Nick to be on for the shoot and director’s cut. Nick set the course and then there was supposed to be a hand-off to the main VFX facility supervisor. At that time Rodeo FX was slated to do most of the show. But our shot count ballooned from 200 to over 600 shots, and Rodeo only had about 100 of the hard core creature and environment work. Luckily I’ve done a fair amount of supervision in the past, so I was able to oversee the remaining vendor work after Nick left.

Can you tell us how you choose the various VFX vendors?
We had several vendors in the running for the main body of work right up until just before principal photography. All of them were very capable creature FX houses. Nick and I had both worked with Rodeo FX in the past, and their supervisor Arnaud Brisebois had come from another company that specialized in creature FX. Rodeo had just done some very impressive work on FANTASTIC BEASTS so we were confident that they could handle the work. Arnaud flew to Toronto to meet Andy and they really hit it off. That kind of sealed it for us.

The other vendors were a mix of smaller companies that Nick, Andy and I have worked with in the past. It’s always great to work with the same people from project to project — there’s just a level of trust and commitment that is developed that helps you sleep at night.

How did you split the work amongst these vendors?
The work was split mostly by sequence. The movie has very discreet sequences so it made it easier than trying to split up a movie that is largely one type of effect.

Can you tell us more about your collaboration with their VFX supervisors?
For the most part only Rodeo had a supervisor on set with us, and that was only for the most difficult sequence at the end of the movie. In post we would review work, give notes, etc. by cineSync and Skype. Andy was usually in the meetings, so they were getting the notes right from the top whenever possible.

The vendors are all around the world. How did you proceed to follow their work?
It actually works out great because we can schedule meetings throughout the day. We usually could have several reviews a day at a time that was pretty convenient to everyone. I won’t lie though — we did keep the London and Spain vendors up late now and then. Luckily the group in Spain were night owls – they told us we could call them anytime before 4am!

Can you tell us more about the previz and shooting process?
Nick really drove the previz of the end sequence. He, Andy and our stunt coordinator choreographed the fight with stunt doubles, then we went to a motion capture stage at Ubisoft in Toronto and captured the whole fight. Rodeo then was able to use that data to animate the fight, which our editor cut with Andy. That became the basis of the tech vis that was used to plan the shoot.

Let’s talk about Pennywise. Can you tell us more about his design?
Pennywise’s design was really driven by Andy and his concept artists. The great make-up FX team at Amalgamated Dynamics.

How did you use the mix of makeup and VFX for him?
Pennywise was in practical make-up unless there was a specific transformation that was required. These were largely the “kill mouths” which is when his lips retract to reveal a mouth full of razor sharp teeth. The other big effect was one we called the “Hideous Smile” which is when Pennywise pulls back his face to reveal the “dead lights” to Beverly. Finally, there were specific transformations in the end fight as Pennywise is trying to defeat the Losers by transforming into their fears. 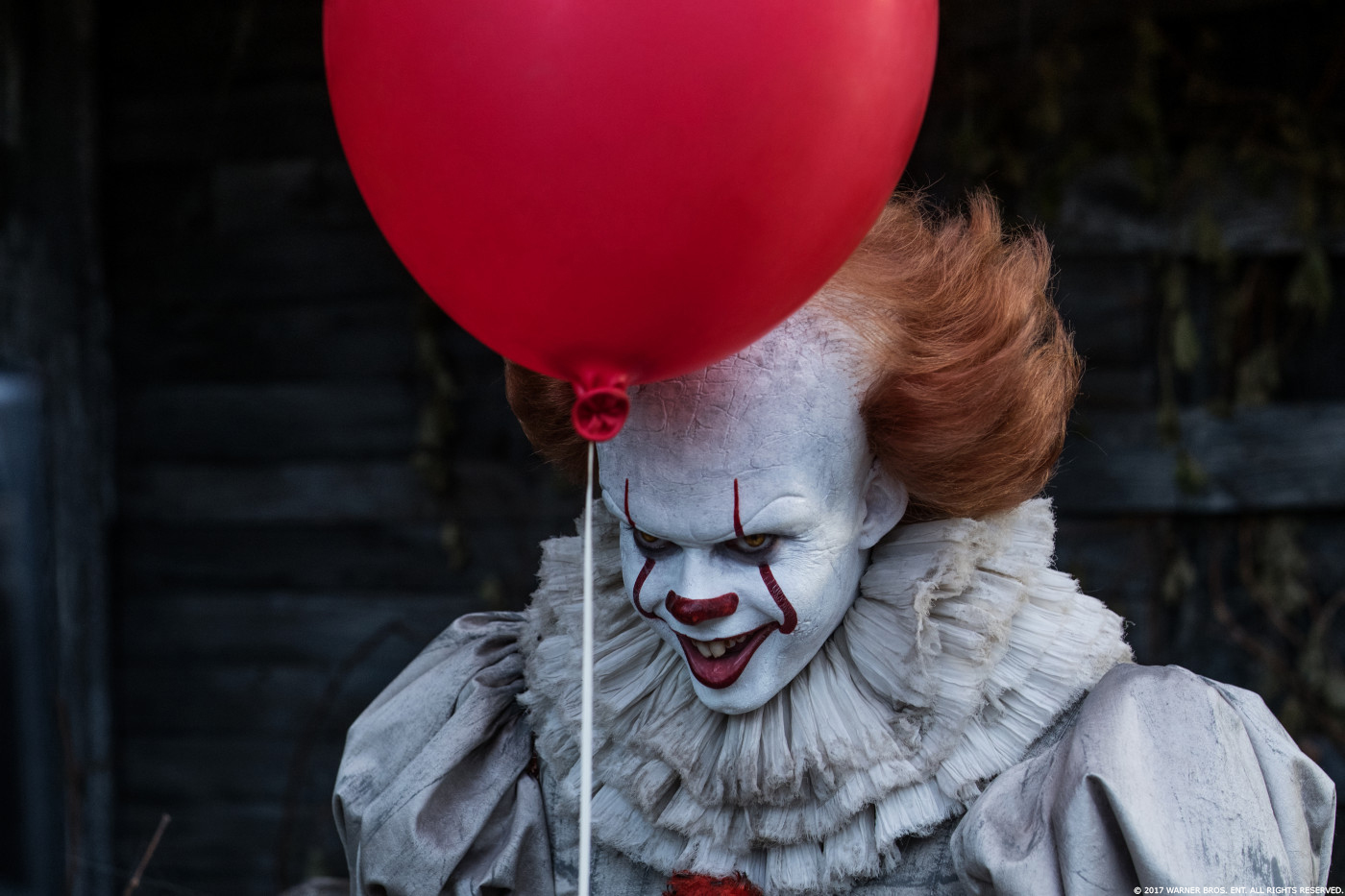 Pennywise is hiding in a big underground place. How did you approach this environment?
The art department designed the set, but they were limited by stage size in terms of how high they could build. We had to extend the set from about 15 feet upwards. Of course we tried to limit shooting off the practical set when possible, but we always knew there would be digital set extensions. 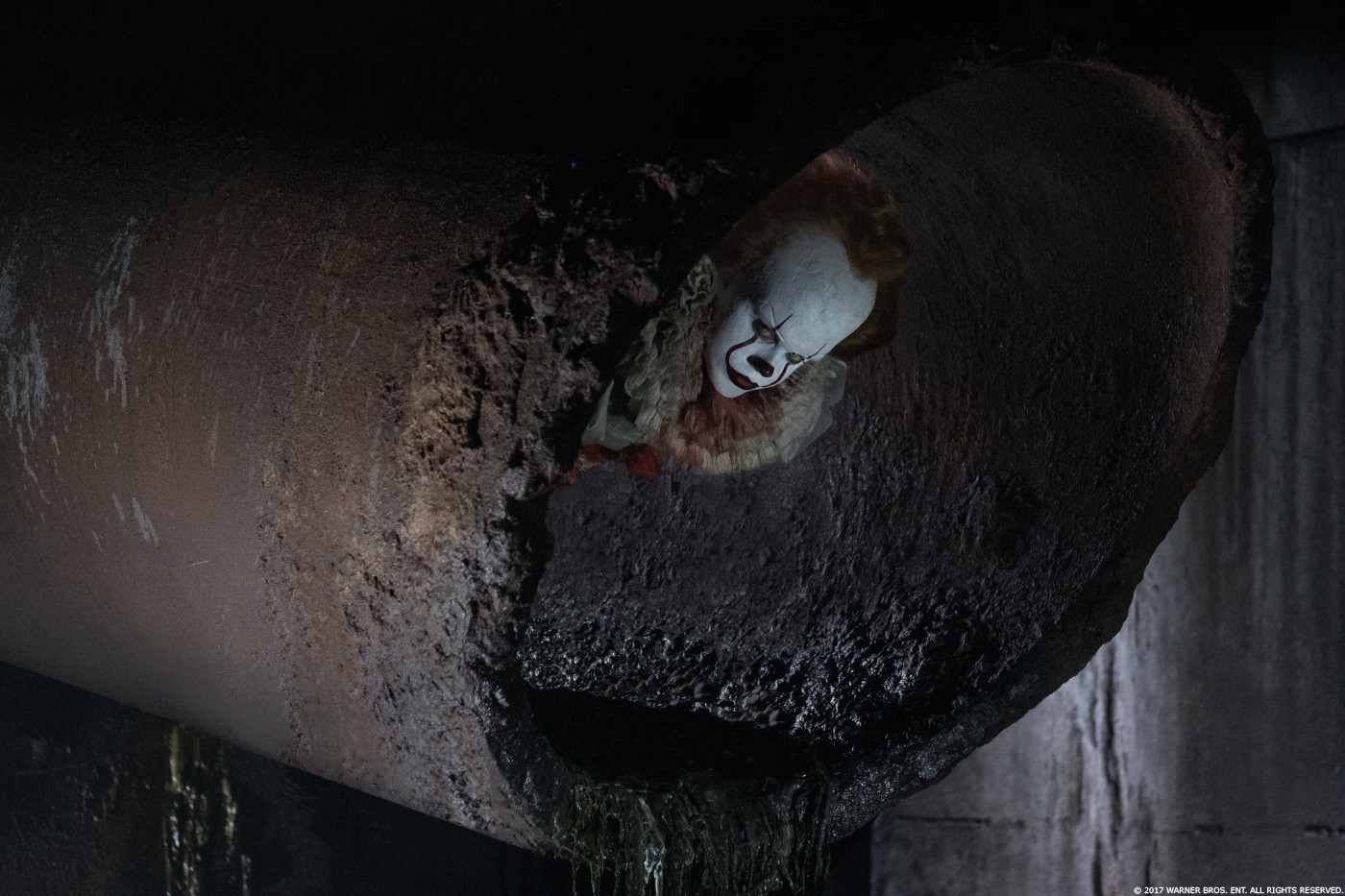 What was the real size of this set and how was it extended?
Rodeo FX did these set extensions — it was a full 3D environment, but in some cases we were able to treat the more minor background extensions as 2D composites using a render of the 3D set if there was minimal perspective change.

During the final fight, Pennywise can change his shape. Can you tell us more about it?
This is largely a call back to characters we have seen before, but we also threw in a couple of others as a callback to the novel. These were full CG creature FX done by Rodeo FX in Montreal.

The movie is really gore. How did you enhanced this aspect in CG?
I actually don’t think the movie is all that gore. A lot happens off camera, and in brief flashes. We did add some CG blood, and enhanced the look of the dead children, but I think you might be surprised on a repeat viewing that it isn’t as bloody as you might have thought.

Derry is the main town of the story. How did you enhanced some of the locations?
Most of the town is a practical town redressed by the art department. There were a few times we had to remove things that were obviously Canadian (there was a Canadian flag in one scene that somehow snuck in the shot). We painted out a lot of modern day satellite dishes, and a few modern cars. We also added a big Welcome to Derry wall mural in a couple of key wide shots. Originally we talked about making the Paul Bunyan statue CG, but ultimately the art department was able to build it practically.

Is there any other invisible effects you want to reveal to us?
One of the most unlikely VFX tasks we had was to remove the safety cables that went from the backs of the kids as they stood on the edge of the cliff in their underwear overlooking the quarry lake! I didn’t envied the compositors — they were really tough shots that no one would ever put on their VFX reel!

The other invisible effect was the SS Georgie — the paper boat floating in the storm drain is fully CG except for one shot at the end. We also had to completely change the weather from a bright sunny day to a rainy cloudy day. Mother nature just didn’t cooperate with production on that one, and VFX was called to come to the rescue.

Which sequence or shot was the most complicated to created and why?
Definitely the Final Battle between Pennywise and the Losers. It was very complex to plan, and the shooting schedule was very tight. It also had the bulk of the CG in the whole movie.

What is your favorite shot or sequence?
I love the garage sequence when Pennywise pops out of the projector. It’s unexpected, and I love how the audience reacts.

What was the main challenge on this show and how did you achieve it?
The main challenge for me was trying to deliver everything the director wanted on a very tight budget. We had to be creative with how we split the work up, which meant more overhead in terms of management, but it allowed us to get Andy everything he wanted.

What is your best memory on this show?
Singing karaoke at 3am with the VFX team and Andy. And the Tiki Bar. I can’t say much more about that. 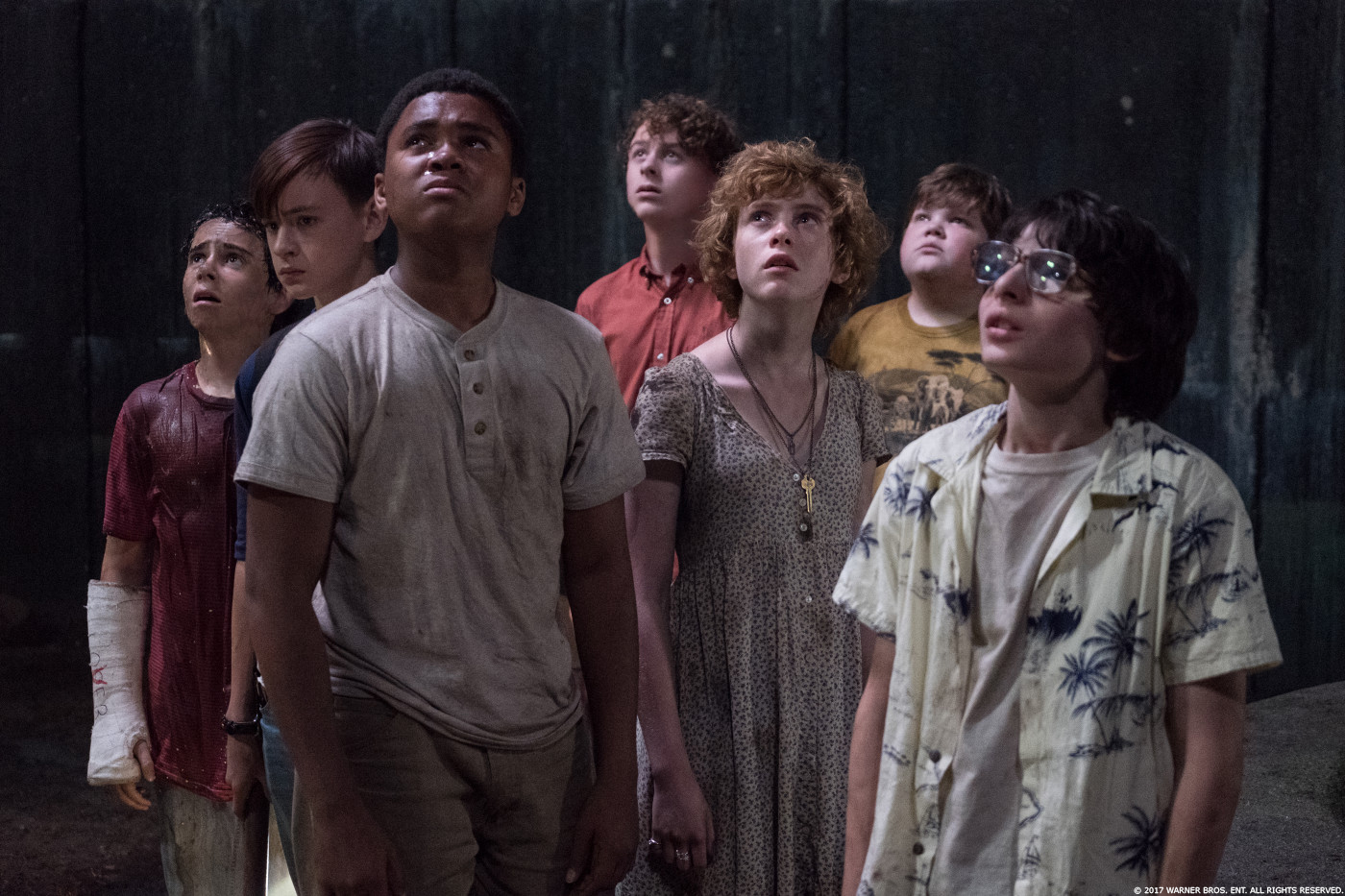 How long have you worked on this show?
About a year in total.

What was the size of your on-set team?
Me, Nick and a data wrangler. We were a small, tight team!

What is your next project?
I’ve been doing some consulting on a project that isn’t 100% green-lit (I can’t say the name, unfortunately), so I’m still looking for the next project.

What are the four movies that gave you the passion for cinema?
Wow, there are so many, but I’ll say the one’s that really stand out from my youth. CLOSE ENCOUNTERS OF THE 3RD KIND, STAR WARS, BLADE RUNNER and LAWRENCE OF ARABIA (which I saw as a re-release because I’m not that old).