Lara Lom began her VFX career at Pixomondo and worked on the films FAST FIVE and HUGO. She then joined MPC in 2011 and participated in numerous projects such as DARK SHADOWS, TOTAL RECALL and PROMETHEUS.

What is your background?
I always aspired to a career in the film industry, but it was by chance that I fell into Visual Effects. Originally from Geneva, Switzerland, I packed my dreams of becoming a writer and actress and moved to the U.S. to pursue my undergraduate university degree in film, theatre, and literature. I then came to the U.K. to pursue my Master’s in playwriting and screenwriting. Upon graduating, I became involved in film doing on-set and pre-production work for the Skillset Film Lab, in association with the BBC, before meeting a VFX Producer who introduced me to the world of visual effects. I was immediately amazed by the technology and role that VFX plays in today’s modern films. I knew then that I wanted to pursue a career in this field. My VFX career began at Pixomondo, in Berlin, working on such films as Martin Scorsese’s HUGO, before moving back to London last year to join the team at MPC. Though my job keeps me happy and busy, I remain active in theatre, especially playwriting, having had a few of my plays produced at several theatre festivals in the U.S.A.

How did you get involved in this show?
I had just completed work on TOTAL RECALL when I was asked to join the SKYFALL crew. I was familiar with the team, having worked with them on another project before.

How was your collaboration with VFX Supervisor Arundi Asregadoo?
I had the privilege of working with Arundi on Tim Burton’s DARK SHADOWS, and it was fascinating to see him tackle a completely different film like Bond. From comedy and fantasy to action and crime, I watched him adapt to a different film genre and deal with the different goals and challenges that come with it, which Arundi did seamlessly well. From a production’s perspective, Arundi is wonderful to work with. He is undoubtedly talented, but he is incredibly focused and hardworking too. I have tremendous respect for his drive and eagerness to make Sam Mendes’ ideas come to life.

What have you done on this movie?
MPC’s work centers on the film’s final sequence, which takes place at Skyfall in Scotland. It includes a lot of environment work (mountains, landscape, and ice lake), the destruction of the iconic DB5, the helicopter crash, and the burning of Bond’s childhood home.

What are the sequences on which you have worked?
The sequences were shared among two coordinators. I personally oversaw the sequences with the helicopter crash, the burning house, and the chase across the moor. 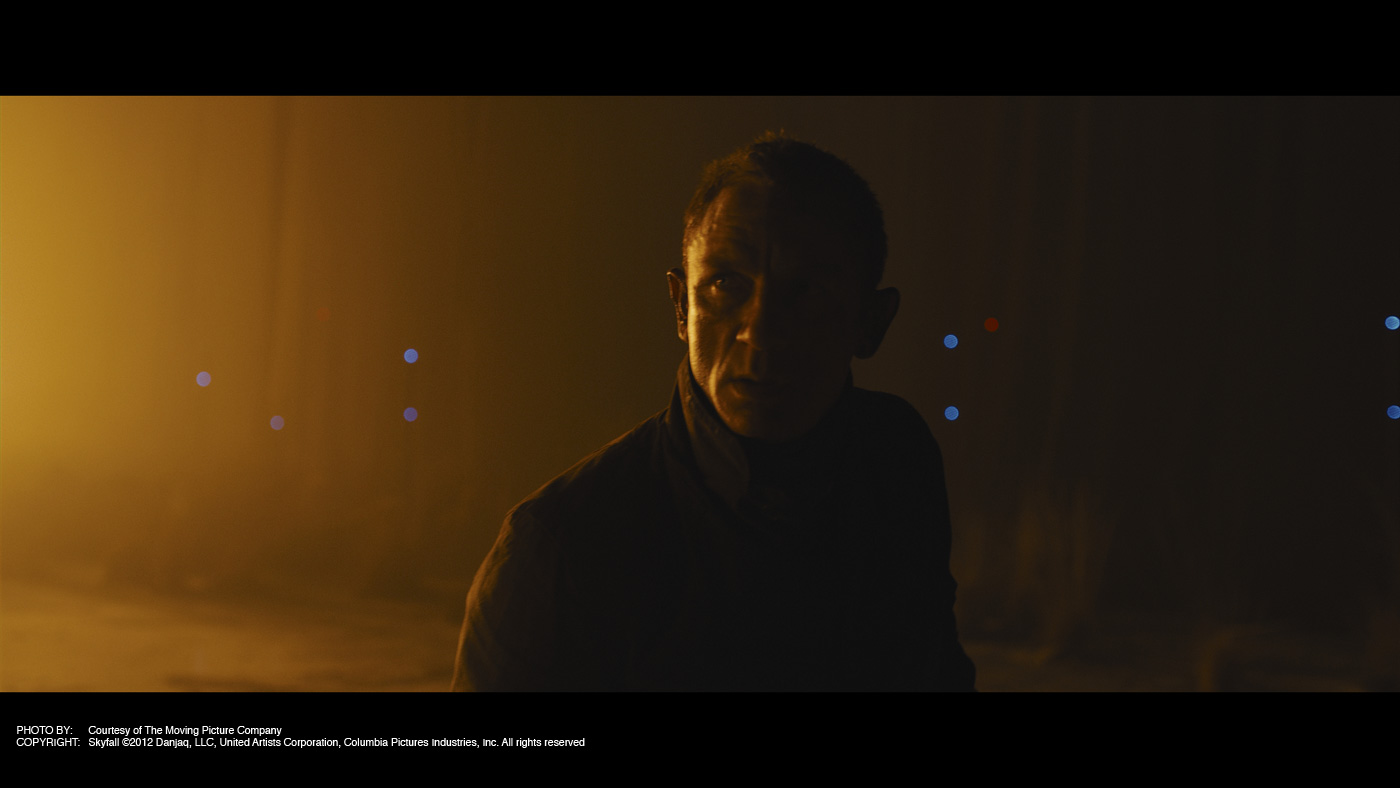 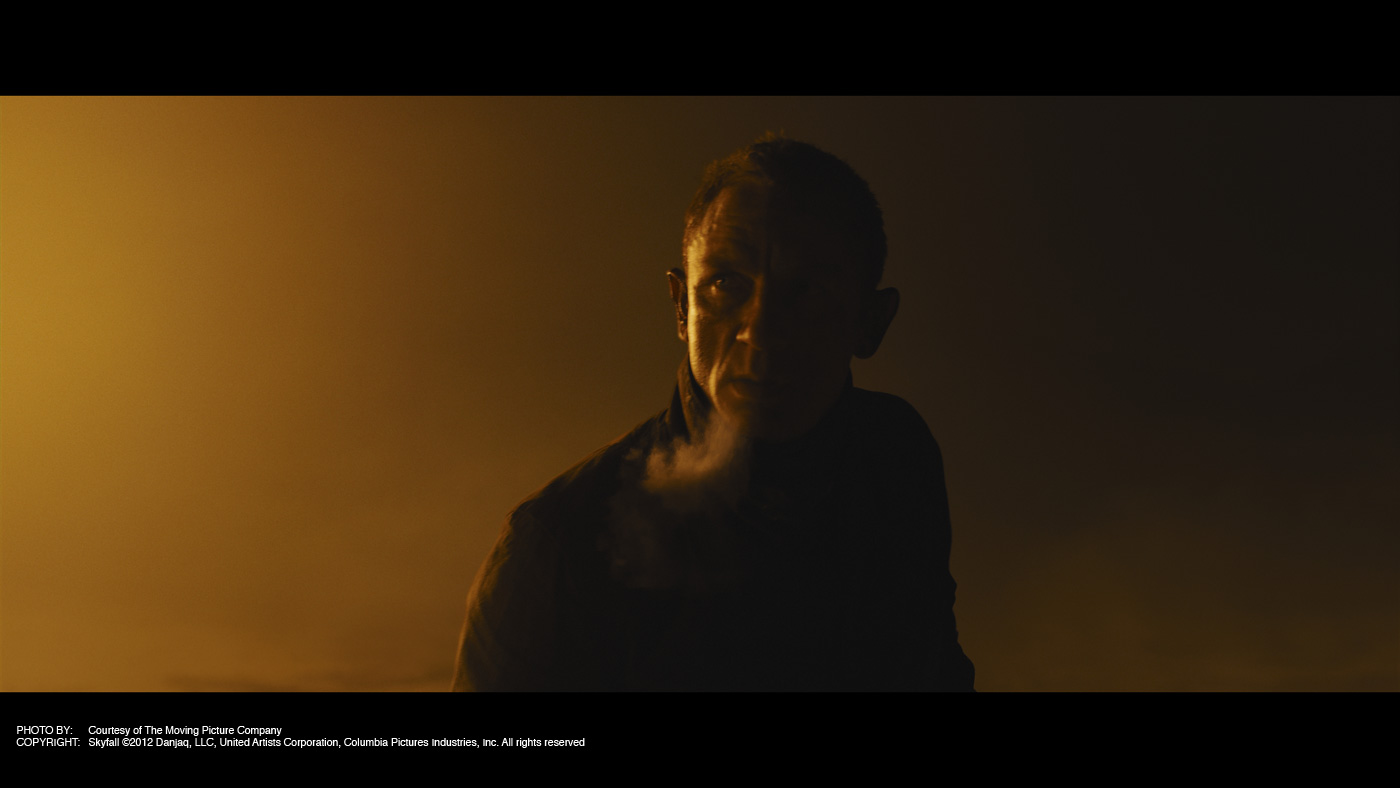 How did you collaborate with VFX Producer Philip Greenlow?
I have worked with Phil before on Tim Burton’s DARK SHADOWS. As an aspiring producer, I find him to be an inspiration. He is relatively young yet very capable in his role. It would be a great achievement for me to be as good a producer as he is by the time I am 30.

Can you tell us more about one of your typical days on this show?
As a Show Coordinator, as opposed to a Department Coordinator (MPC has both), my role was to assist the Producer and Supervisors as much as possible and liaise schedule and client information across the various departments. A daily plan was discussed every morning with the Supervisors and Show Production team after which I remained close to the the VFX Supervisor, Arundi Asregadoo, and CG Supervisor, Sheldon Stopsack, to aid them in reviews and ensure that their time was utilized as efficiently as possible across departments.

How have you work with the various departments?
At MPC, there are two different kinds of coordinators: Department Coordinators and Show Coordinators. Department Coordinators work directly with their department’s respective artists while Show Coordinators liaise feedback, client requests, and schedule information across the various departments. As a Show Coordinator, I tried to facilitate the workflow, especially in the comp and environment departments, in which the majority of work was carried out. Having the bulk of our work done in just two departments was extremely beneficial to our artists who profited from Arundi’s strong presence and involvement. As for the rest of the 3D work, it was led by Sheldon Stopsack who is another of MPC’s talented CG Supervisors and was able to overcome many of the obstacles the team came across.

Can you tell us more about your workflow management tools?
MPC uses an in-house developed production tool called Pronto. It differs from other systems which I know in that it is broken down into various subgroups which allow schedule ownership for both the show and department production teams. Though both will work concurrently with each other, following the show’s overall production schedule, Pronto offers a certain level of independence for the individual departments as well.

What was your feeling to work on a James Bond movie?
Exciting and intimidating at the same time. It is incredible to be part of the James Bond franchise but also daunting as the expectations are so high. One wants to do it justice.

What was the biggest challenge on this project and how did you achieve it?
As Arundi mentioned in his own interview, the chase across the moor with the burning house in the background was a technical challenge for our team. It was of utmost importance to create the scene that Roger Deakins (DOP) had so ingeniously orchestrated in his mind. From a production’s point of view, it was important to anticipate the scene’s technical obstacles. Considering the importance of the scene, our schedule had to reflect a quick turnaround to encourage early client feedback.

Was there a shot or a sequence that prevented you from sleep?
It would have to be the helicopter crash. One of the main complexities was to create the deformation of the helicopter’s structure upon impact. We decided to experiment with the shot, changing the deformation levels of the helicopter’s shell, altering the speed of the crash, and playing with the various effects (smoke, sparks, and debris), which from a production’s perspective was tricky to schedule. Since this is such an important and difficult shot in the sequence, the challenge was to complete the shot as fast as possible to view it in the cut for continuity purposes.

What do you keep from this experience?
That Bond looks better than ever as it celebrates its 50 year anniversary this year!

How long have you worked on this film?
About 6 months. 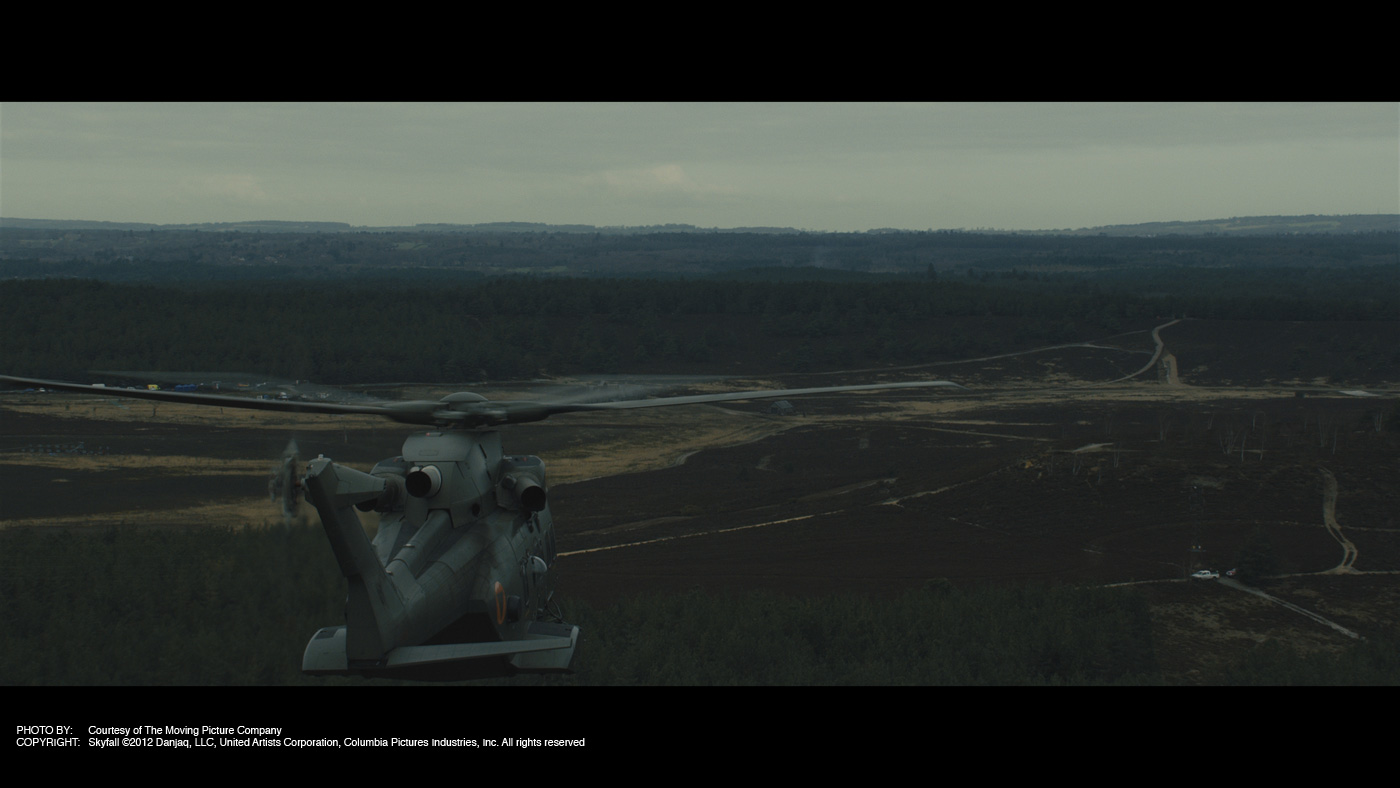 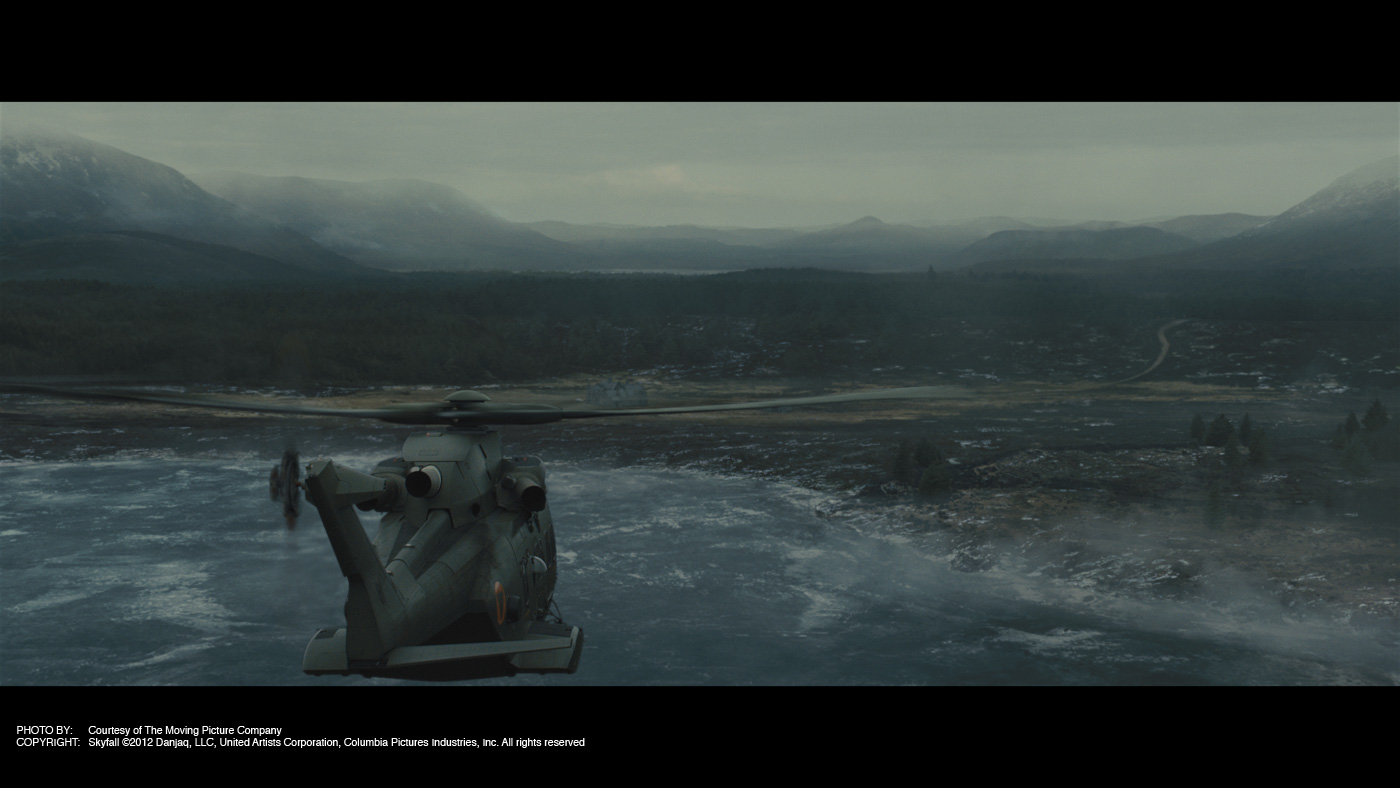 What advice would you give to a young Swiss who would like to start a VFX career?
Switzerland is an amazing country in which to grow up and live, but I have acquired the most invaluable lessons and enriching experiences for my career through my travels around the world where I have had the opportunity to meet and work with some of the most talented individuals in the industry. From London to New Zealand, the visual effects houses are varied, and I would recommend any Swiss person aspiring to work in visual effects to take advantage of the industry’s geographical opportunities. Although several VFX companies reside in Switzerland, the work remains limited, so it is encouraging to see more and more Swiss VFX professionals dispersed around the globe, working for some of the best companies in the field. With time, I think it would be great for those Swiss VFX professionals to come home and share their international knowledge and skills so that Switzerland may grow a strong and reputable VFX industry of its own.

What is your next project?
I am currently involved on Ridley Scott’s THE COUNSELOR. Concurrently, I am offering production support and training to the MPC team in Bangalore.

What are the four movies that gave you the passion for cinema?
Tim Burton’s BIG FISH for its story and unconventional creativity, Mel Brooks’ THE PRODUCERS for making me laugh, Alfred Hitchcock’s SHADOW OF A DOUBT for the mystery and suspense, and Michael Bay’s TRANSFORMERS: DARK OF THE MOON for its visual effects.