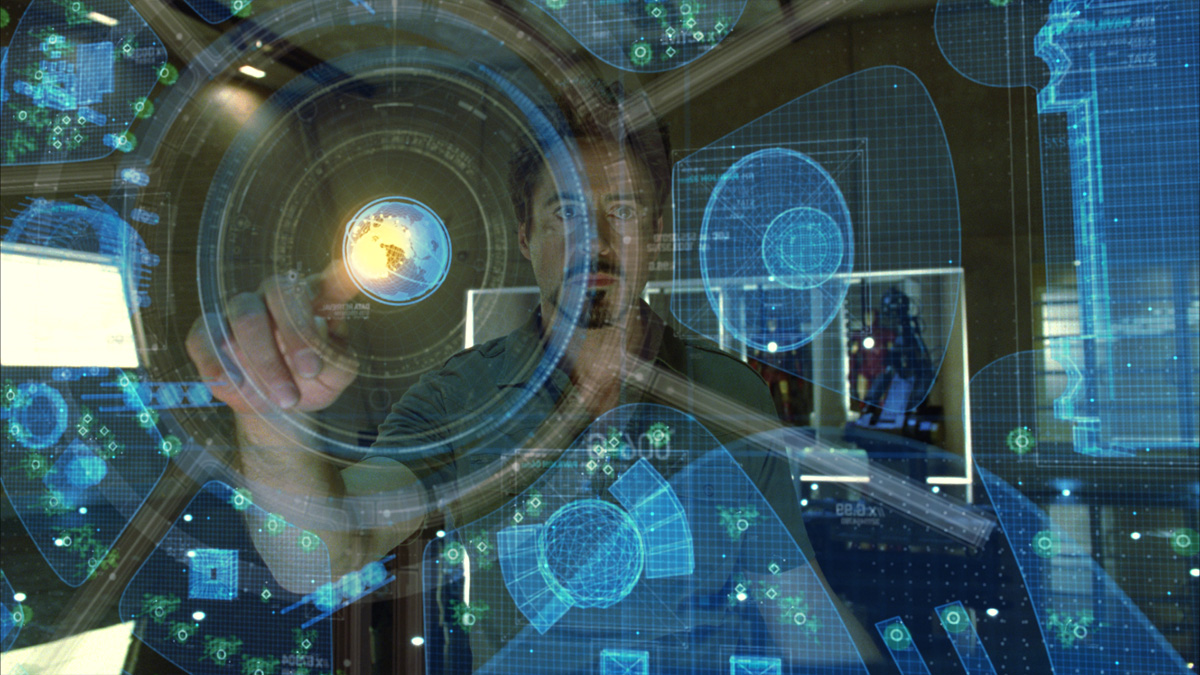 Danny Yount started as an self-taught designer and creates film credits in Prologue Films for projects such as IRON MAN or ROCKnROLLA.

What is your background?
I started as a self-taught designer that loved using computers during a time when the industry did not take them seriously as a graphic design tool. But in 1988 the mac was not color yet. When the color models came out in 1990 everything changed. I feel lucky – I was also there when the shift to digital video started happening as well as the beginning of web publishing. Watching the computing industry transform the arts was very inspiring – it finally seemed that anything is possible for the individual – even someone like myself who did not go through art school. I’m now a Director at Prologue Films – I create main titles and direct live action sequences for film, tv promos and commercials.

What did Prologue make on this show?
We designed the visual effects for all the holographic and computer screen interfaces and interactions that occur in Tony Stark’s lab. We also shot live action to supplement the main title edit as well as designed the animated typography for the credits.

How was your collaboration with director Jon Favreau and the production visual effects supervisor Janek Sirrs?
Great. We had worked with Jon on the first movie so it was a thrill to be asked again. It was our first time working with Janek. What was exciting is that we were called in very early to help them visualize everything before shooting principal photography. That level of collaboration is what made everything work so well – it really gave all of us the leverage to explore everything deeply. Jon and Janek had so many ideas about things that were so inspiring to think about. We came back with additional ideas and tests that really pushed us to our limit creatively. Much of it was not used but it was really a joy to explore them and push ourselves.

Can you tell us how you designed the main title?
The filmmakers wanted the opening credits to be type over picture – starting with the intro of Mickey Rourke and his father as he passed away. Rourke then begins the task of building his own RT in a makeshift lab in his apartment. Underlying this sequence is the narrative of Tony’s successes and stardom via insert shots of newspapers and magazines hung on the wall. The problem was that they had not shot enough supportive material for this so we needed to set up our own film shoot at our studio – essentially recreating the wall and workbench. We matched the film stock and camera and got to work. We also did a few macro insert shots like the RT lighting up and sparks falling to the floor, etc. I thought it would be a good way of intensifying the edit a little.

How was the shooting of the sequences with holograms?
We attended the shoot, but the director shot all material for that and we were handed the plates.

Did you create previz to help the crew and Robert Downey Jr. For the shooting?
We did a little at first, but mostly we developed the ideas with the team at Marvel and provided a few camera tests. They then hired a company who specializes in previz to work with the director in-house to nail down the many story points in development. We used that study as a basic editorial template and went from there. The scene that required previz was where Tony Stark discovers the secret of the molecule from the expo model.

Can you explain to us the creation of a shot like those in the Tony Stark’s lab from scratch to the final result?
After a long discussion with Janek Sirrs about the kinds of things he and the Director wanted for the film, we went away for a while and rallied a small group of designers to create motion tests and styleframes. We also had a few vfx-based designers working on motion tests – Adam Swaab, Troy Barsness, Sean Werhli and Jesse Jones. Most of the aesthetic was created by Ilya Abulhanov and myself, but our talented team of designers and animators inspired us to push it even further as we saw what was possible. The expo sequence lead by Paul Mitchel is a good example of that. We came up with a look that was very intricate using a combination of contour shading and particles attached to vertices.

Aside from the standard procedures of matchmoving, tracking, roto, painting and wire removal, the most challenging aspects involved the interactions with Robert Downey Jr.. We really wanted everything to flow naturally but not come across as too gimmicky or canned like many interfaces can be in movies. We are first and foremost graphic designers who pay a lot of attention to visual communication and details like that – so every motion and animation in these complex scenes has a very specific purpose and acts precisely on cue to the actor’s performance and Jarvis the computer system.

Have you received some elements from ILM or supervisor Janek Sirrs like 3D scans of the sets?
Yes, we got LIDAR scans from them that informed us of correct spatial relationships. We also shot a lot of reference photography of the set in case we needed to pull a few rabbits out of our hats. One scene in particular where this was useful was the 3d photogrammetry reconstruction of the « hall of armor » shot. It started as a locked off plate but the director wanted a more dynamic move applied to it.

The shots of the sequence with the city model hologram are rather long. Did that cause you some problems (technically and artistically)?
Paul Mitchel (the designer that lead the team on that sequence) can best describe the challenges:

« The Expo hologram sequence posed a number of issues both technically and artistically. Artistically we had to handle a lot of detailed visual information on screen at one time, so we had to find the balance between the right level of complexity verses too much confusion. We needed to make sure Tony wasn’t overwhelmed by the information presented to him. We also had to make sure we enhanced his performance with holograms matching his eye line and arms reach.

Technically the challenges were getting this long sequence to feel like one coherent piece and getting it rendered for our weekly reviews with Marvel, so it took a long time to finalize the subtleties in each shot. Getting the holographic look right and consistent was a challenge as it needed to feel like the same hologram in the wide and close up shots, each shot had it’s own issues which effected the light and transparency of the hologram. »

How did you proceed to assure the shot continuity?
That’s one of the most challenging things with so many moving parts – getting everything to synch perfectly form scene to scene. And many times scenes were shortened or lengthened editorially which provided more challenges as time went on. But once the edit was locked we were all good – it’s just a little bumpy at times before that happens. Also viewing details every step of the way is extremely important. We ran all our sequences from a FrameThrower system to a large plasma display for our internal reviews with the teams involved.

Which softwares did you use?
AfterEffects, Maya, Nuke, Shake and the Flame.

How did you design the screens content and their animations?
Ilya Abulhanov and Clarisa Valdez designed all the screens and directed a team of terrific animators and designers to excecute the many detailed and complex interactions and data. Daniel Kloehn and Takayuki Sato spent countless hours animating the insanely detailed interactive components. It was definitely a labor of love – and fear – but mostly love.

How many shots have you done and what was the size of your team?
We did around 120 shots – many of them were omitted from the final film as the run length was reduced at the request of the studio. I think in the end we ended up delivering around 90 for final. At the height of production we had over 30 people working on the film in 3 separate teams lead by Paul, Ilya and myself.

How long did you work on the show?
A little over a year.

What did you keep from this experience?
We learned more about what we are capable of as a studio. We started as a small motion studio in Kyle’s house, so to see us working on this scale was very exciting. The director called us to work on this because he liked the level of detail and aesthetic we bring to the table. And we have so many talented designers coming up with crazy next-level stuff so the energy and stamina we had as a group really showed for this one. We could have all used a little more rest in the end but an opportunity like this only comes around once in a while. We gave it everything we have and I think it shows.

What is your next project?
Right now we are working on a couple of sequences for the remake of TRON as well as the end credits. The footage I saw looked amazing and I admire the director’s perspective and design sensibilities so this should be a lot of fun. I’m also a huge fan of the original film.

What are the four films that gave you the passion for cinema?
BLADE RUNNER, STAR WARS, LOGAN’S RUN and ROLLERBALL. By today’s standard the latter 2 would be silly but as a 12 year old they melted my brain. But Joseph Kozinski is doing the remake of LOGAN in addition to TRON so maybe there’s a chance to reconcile that. I hope I can do something for that also but we’ll see.

To extend the list I would add ALIENS, ROBOCOP and T2.

Thanks a lot for your time.