In 2012, Grady Cofer told us about his work on BATTLESHIP. He then worked on many films such as LONE SURVIVOR, NOAH and TERMINATOR GENISYS.

How did you get involved on this show?
Roger Guyett: I saw Steven a couple of times as we were finishing up STAR WARS – THE FORCE AWAKENS – he’s a good friend of JJ’s – and he talked about a project he had in development and whether or not I might be interested in working on it – as luck would have it the project was READY PLAYER ONE.

Grady Cofer: My first meeting with Steven about READY PLAYER ONE was 3 years ago. I had actually been working with him at the time on updating the Amblin Logo. We all met in a conference room at Amblin, and Steven had Ernest Cline’s book on the table in front of him. And just the potential of that pairing – Steven adapting Ernie’s awesome, mind-bending book – was so exciting. Like all of us, I think Steven was really inspired by the material. His enthusiasm for the project was clear in that first discussion. And it carried on throughout the whole production.

What was it like working with director Steven Spielberg again?
RG: It was a great thrill! He’s one of the greatest directors of our time – he’s such a great craftsman and so knowledgeable about the story-telling process. It’s a little intimidating of course but I’d worked with him before which helped. He’s a consummate filmmaker and incredibly creative… and his enthusiasm and energy are infectious!

GC: It was, I have to say, one of the most creative shows I’ve ever worked on, and a lot of that comes from the collaborative environment that Steven promotes. He has built a career out of his amazing ability to tell emotional stories through creative imagery. And it was an honor to be a part of that process. 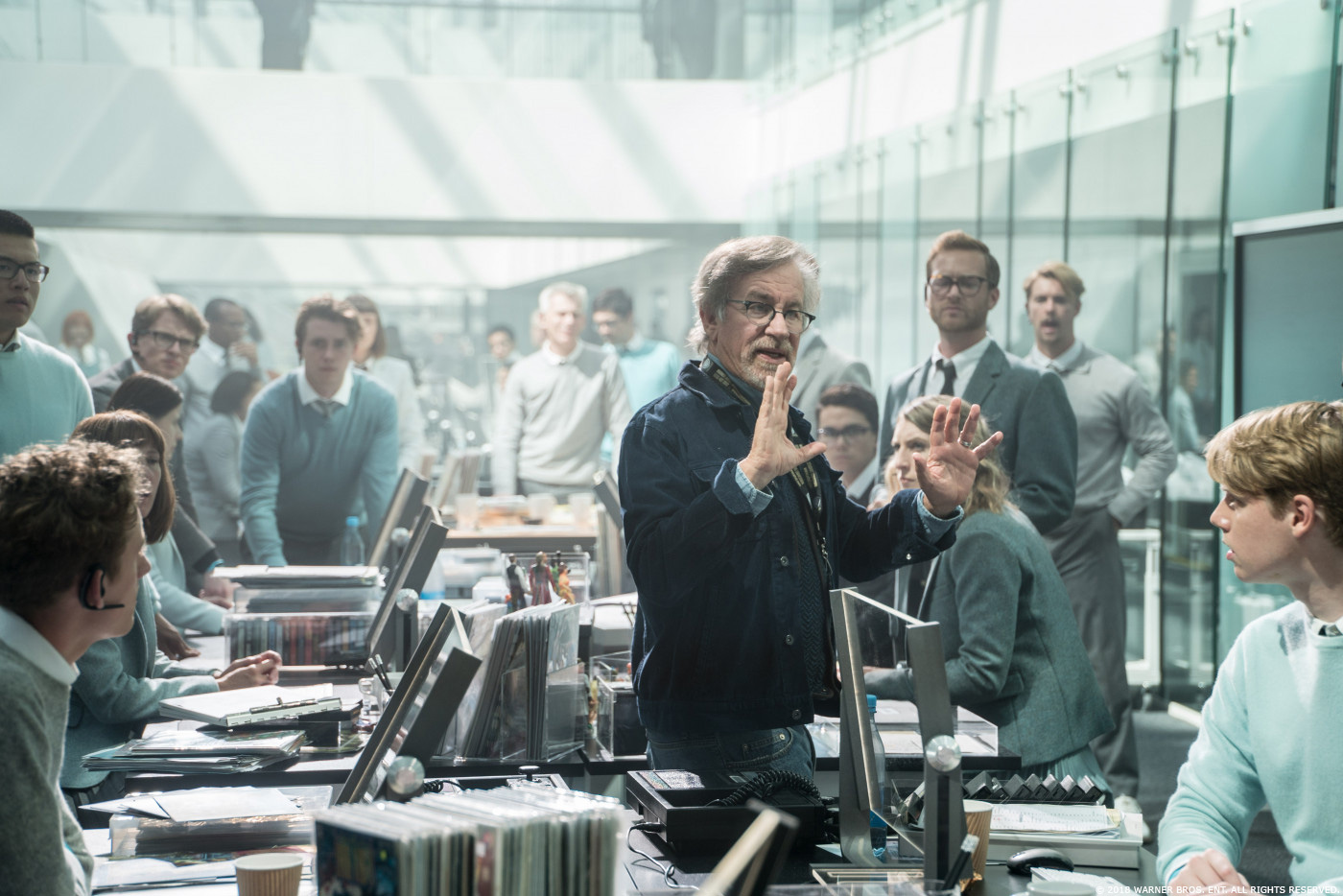 Did you received specific indications and references for the visual effects sequences?
RG: There were many discussions about each moment of the movie – how they would visualized – what does the Oasis look like? This was clearly a huge design challenge. Of course Adam Stockhausen, the Production Designer, played a huge role in the process. We had such a great Art Department – which included Alex Jaeger and Steve Tappin from ILM. The art team constantly provided concept art and reference images for each sequence. We also had a research team providing ideas for potential references and easter eggs.

How did you organize the work with your VFX Producer?
RG: We had a superb VFX production team led by ILM Executive VFX Producer Luke O’Byrne and VFX Producers Ann Podlozny, Abby Keller and Kacy McDonald. They did an amazing job of organizing the work between all the ILM’s offices – London, Singapore, Vancouver and San Francisco.

How did you split the work amongst the ILM VFX Supervisors and the ILM offices?
RG: You try and play to the strengths of the teams and availability of crew disciplines in the various locations. ILM London handled the biggest portion of the project and we were lucky to have a really great team there led by Grady Cofer (who went over for a large part of the production), producer Ann Podlozny and Assoc. VFX Supe Daniele Bigi. Dave Dally was the supe in Singapore where the second largest body of work was done.

Can you tell us more about the previz and postviz work?
RG: That work was primarily handled by Previz Supervisor Scott Meadows and his team at Digital Domain, but ILM also did some work with Dave Shirk as the Supe if I remember correctly. Most of the Postviz work was handled by Dave Shirk and the ILM team.

GC: Back when I started on the show, the script was still very much in progress, especially when it came to the action beats. So we would create storyboards, or Scott Meadows from DD would come in with some cool previs, and Zak Penn, the screenwriter, would see it, and say: “I can write to that.” Or he or Steven would offer up something better and we’d work on that. But the visual development of those beats happened alongside the story development, and I think that really helped elevate the material. People talk a lot about the “quintessential Spielberg set piece.” He creates these elaborate action scenarios, but you never lose track of the characters and their story. Steven does that throughout RPO. In the Distracted Globe, Art3mis and Parzival are engaged in this massive gunfight (in zero-gravity!), but all the while they’re having a romantic spat! I think the cleverness of those sequences comes from the fact that the previs process was so connected to the development of the story.

Where were the different parts of the movie filmed?
RG: Two Mocap Stages were set up at the Warner Bros.’ Stages just north of London in the UK. We did the main MoCap shoot there – with a little extra mocap done at the Digital Domain studio in Los Angeles. The live action section of the movie was filmed on the stages at Leavesden – with a huge set of the IOI headquarters – and of course, various locations for the exterior live action. A lot of which was filmed in Birmingham, north of London. Digital Domain handled all the VFX work for the live action portion of the movie – with Matt Butler supervising that work.

Most of the movie takes place in the Oasis. How did you work with the art department to design it?
RG: At the beginning it can certainly seem overwhelming! There were a lot conceptual discussions about how the Oasis should feel. These were often turned into concept art for Steven to react to. Sometimes they were literally just ideas (more like sketches, for example of how an avatar’s inventory might explode out), other times they were more complete concepts for a specific environments or shots (e.g. the design of the Distracted Globe Nightclub). Of course a lot of the ideas influence the script and if Steven really liked an idea we would find a place to build it into the story. But once the script started coming together you can break that down (just like a live action movie) into the digital sets and environments you need to create to tell the story. A lot of concept art follows… and these are then turned into simple sets/environments as the shots start coming together. We did need a pretty good idea of each environments design for the Mocap shoot – although the detail would develop over time.

What was your methodology step by step to create these various and massive environments?
RG: We had an amazing environment team lead by Barry Williams, who’s incredibly talented. He set up a completely new pipeline for the environments which we felt was a necessary step. There’s so much interaction between every character, object and env in the Oasis we wanted to make sure the artists had access to everything as they worked on the shots. A lot of the designs were inspired by real photography – for example the ice of Planet Doom and the streets of New York (with references to many movies like THE FRENCH CONNECTION) – but each environment went through many rounds of development as the sequences developed.

Can you explain in detail about the creation of the avatars?
RG: Each character has to reflect the personality of the person driving it… and of course there has to be an overall sense of how such a thing as the Oasis could actually practically function. But if anyone was going through the process of creating their Avatar they would make many detailed choices based on their interests and self-image. For example, Aech has a mechanical arm reflecting his interest in engineering and technology, Parzival has skin markings reminiscent of gaming designs. We also clearly wanted to avoid just creating “humans” as Avatars – that sounded uninteresting and could have created an ‘uncanny valley’ issue.

GC: When it came to the avatars, Steven was interested in exploring lots of creative options: maybe they could have animal influences, or get inspiration from anime, or games or retro movies. There’s a great line at the beginning of the film where Wade says: “People come to the OASIS for all the things they can DO, but they STAY because of all the things they can BE.” So that’s kind of the central question: who does Wade want to be? Or Samantha? How do they want to present themselves to the virtual world? And I think the characters started really falling into place when they became a collection of intentional choices. And every choice that they’ve made in their avatar gives a hint at the character behind the mask. For instance, Parzival is part 80’s teen hero, part anime guy. With a dash of Han Solo (because who didn’t want to be Han Solo in the eighties?) And if you look very closely, his skin has a kind of latticework, almost like a knight’s chainmail. So there are echoes of Arthurian legend there.

Which avatar or cameo is your favorite?
RG: there’s so many in there, so very hard to pick a favorite but I’m a big fan of Ray Harryhausen so I love the skeleton army clan we put in the final battle – I think you even see one of them in the night club!

A sequence of the movie takes place in the iconic hotel of The Shining. What was your work on this set?
RG: THE SHINING sequence, one of the highlights of the movie for me, was done by the Singapore team led by David Dally. There was obviously a lot of environment work in there, so our global environment supervisor, Barry Williams, played a big part too – he started early development on how we could go about recreating the look of the hotel.

Can you tell us more about your work on the terrifying wave of blood from The Shining?
RG: That was done by the ILM Singapore – they had a terrific FX group and did some really complicated stuff. The added difficulty came from having to match the look of the blood pouring out of the elevator in the original movie, which was done with a dump tank I believe. Of course, adding all the choreography that was required was not simple – you had to really direct the “blood river” and there’s so much detail : all the splashes and the way it hits the walls and smears! Yikes ! A lot of work!

What is your best memory on this show?
RG: I have many great memories from the show. We had such a great group of people working on the show it made it an absolute pleasure – although very hard work of course!

How long have you worked on this show?
RG: A bit over 2 years.
GC: Nearly 3 years.

What’s the VFX shots count?
RG: There were about 900 shots done by ILM but more importantly, that represents a little more than 90 mins of screen time! There were some very long shots in the movie.

What was the size of your on-set team?
RG: ILM’s on-set team was pretty small for the MoCap shoot – so much of the support team were in place with Digital Domain’s MoCap/Virtual Production crew. There were about 5 of us – some days more. If we needed additional people to help out we called on the team in our London studio.

ILM: Dedicated page about READY PLAYER ONE on ILM website.