In 2014, Dan Schrecker had explained to us about his work on NOAH. He then joined Psyop and took care of the visual effects of films like AMERICAN ULTRA, EQUALS or JOY.

How did you and Psyop got involved on this show?
Around the same time that HAIL, CAESAR! was starting preproduction, the Coen brothers reached out to me, having been familiar with my past work. I had actually spoken to their team about INSIDE LLEWYN DAVIS but the timing didn’t work out. I didn’t want to pass up the opportunity to work with Joel and Ethan, and we were able to take advantage of Psyop’s facilities on both coasts of the US, a unique advantage for this project.

That’s your first collaboration with the Coen brothers. How did you feel about that?
Joel and Ethan are just incredible people to work with in every way. They’re just so thorough in their process from start to finish, so they knew exactly what was needed every step of the way. Because they write and edit themselves, they just have such a great understanding of the project as a whole, which really makes our job easier and more fun.

What was their approach about the visual effects?
HAIL, CAESAR! is the biggest visual effects film the Coens have done to date, so there were things to be learned along the way but they picked things up pretty seamlessly. Overall, our effects had to work in the world of the film, so that meant sometimes they were seamless and sometimes we recreated 1950’s era effects and still other times we blurred those lines. 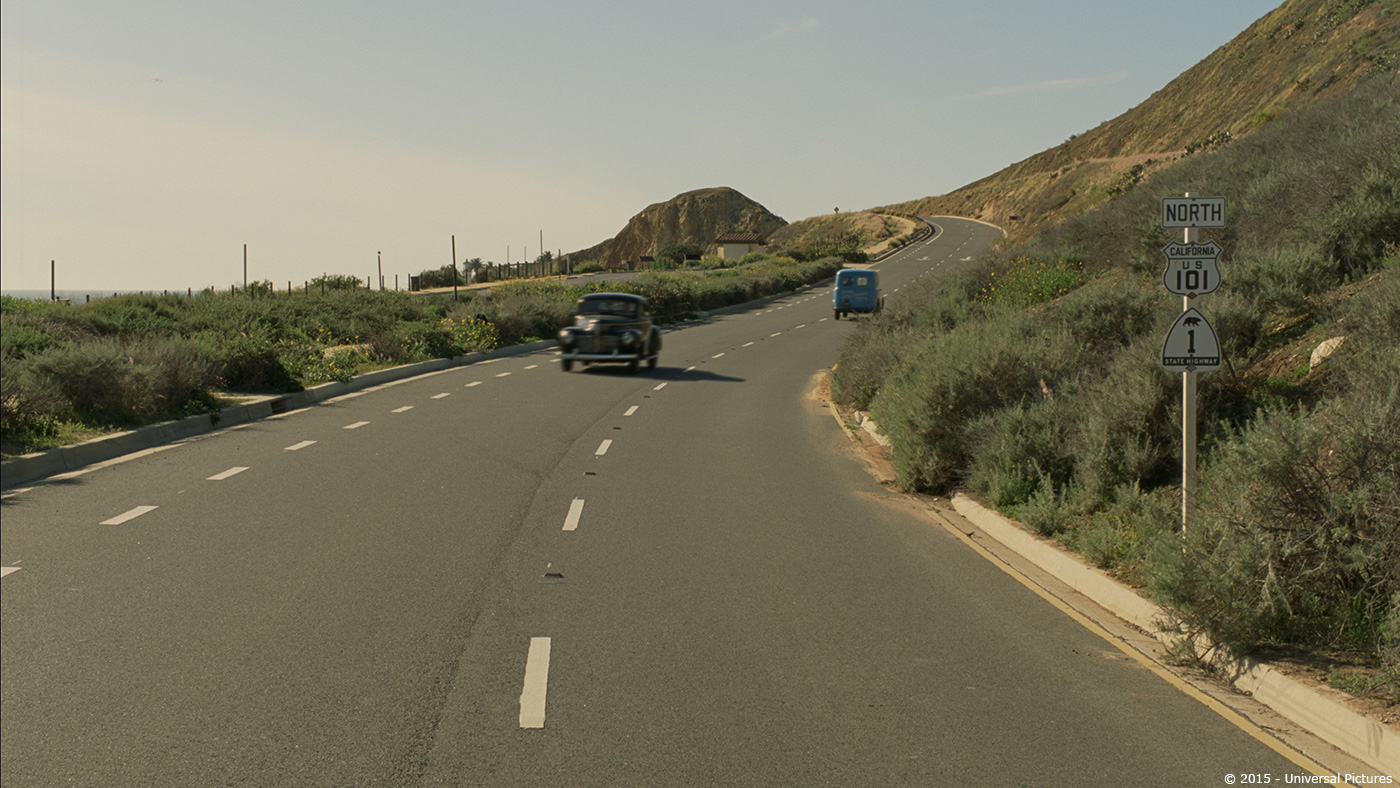 Can you describe one of typical day during the pre-prod, on-set and then on post?
Pretty much the same as other films. In prep there are meetings, tests and basically figuring out the approach to shooting. On-set is about making sure we get everything we need without slowing down the process too much. And post is about working with editorial and our team of artists to actually produce the shots. We had reviews with Joel and Ethan to go over the work and then it would be back to the shop to keep working on things.

How did you created the Capitol Studios stages outside environment?
The studio scenes were shot entirely on the Warner Bros lot, which already looks quite classically Hollywood. So jumping off from there, CG was incorporated along with some extra matte painting of the lot. 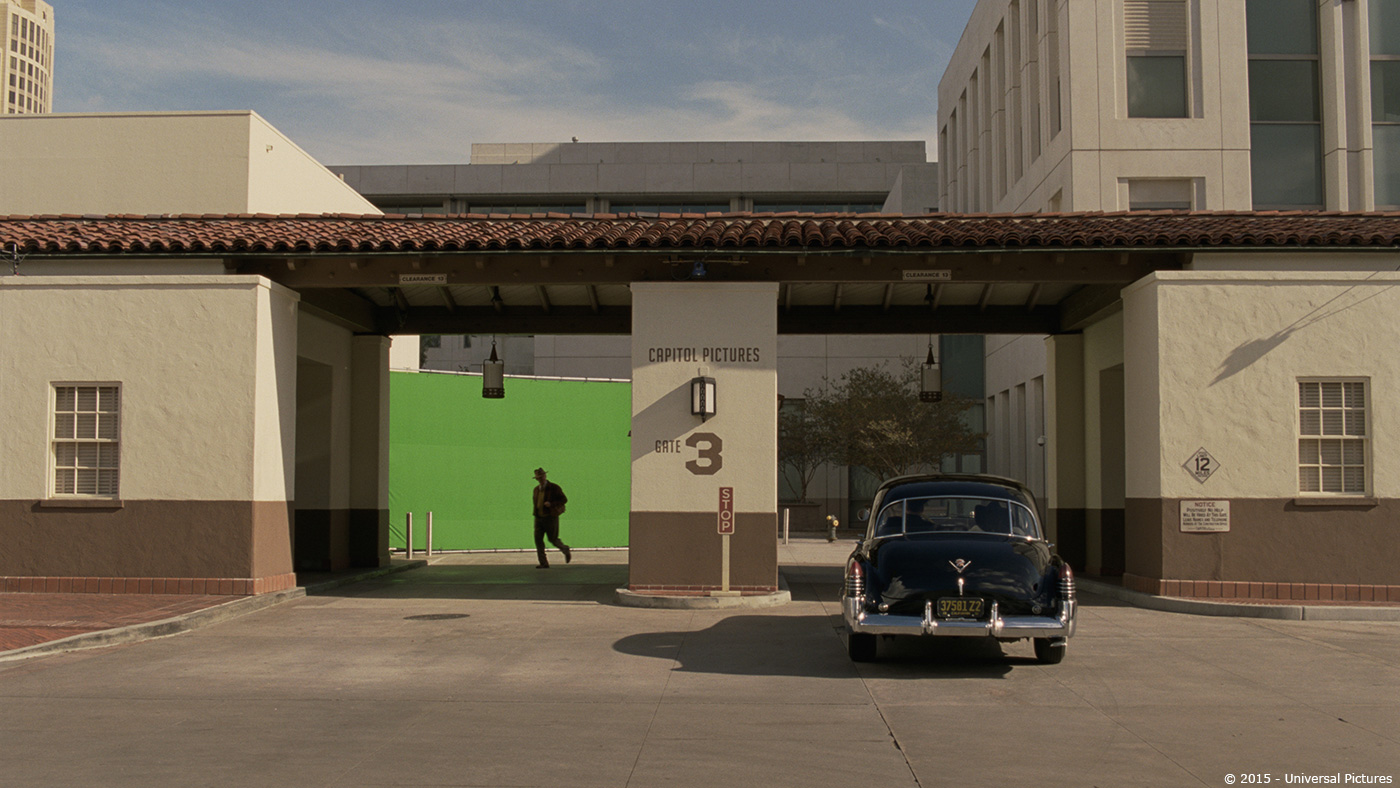 For a massive shot of the studio from above, we filmed some reference shots and then rebuilt hero stages in CG so that ultimately the end result was a completely CG environment. There is a beautiful water ballet featuring Scarlett Johansson. Can you explain in details about your work on this sequence?
The main challenge in this sequence was creating a CG whale mouth that comes up from behind the camera, zeroes in on Scarlett and totally engulfs her. Eventually we ended up deciding on doing a mouth in CG that looked sort of like a set piece. 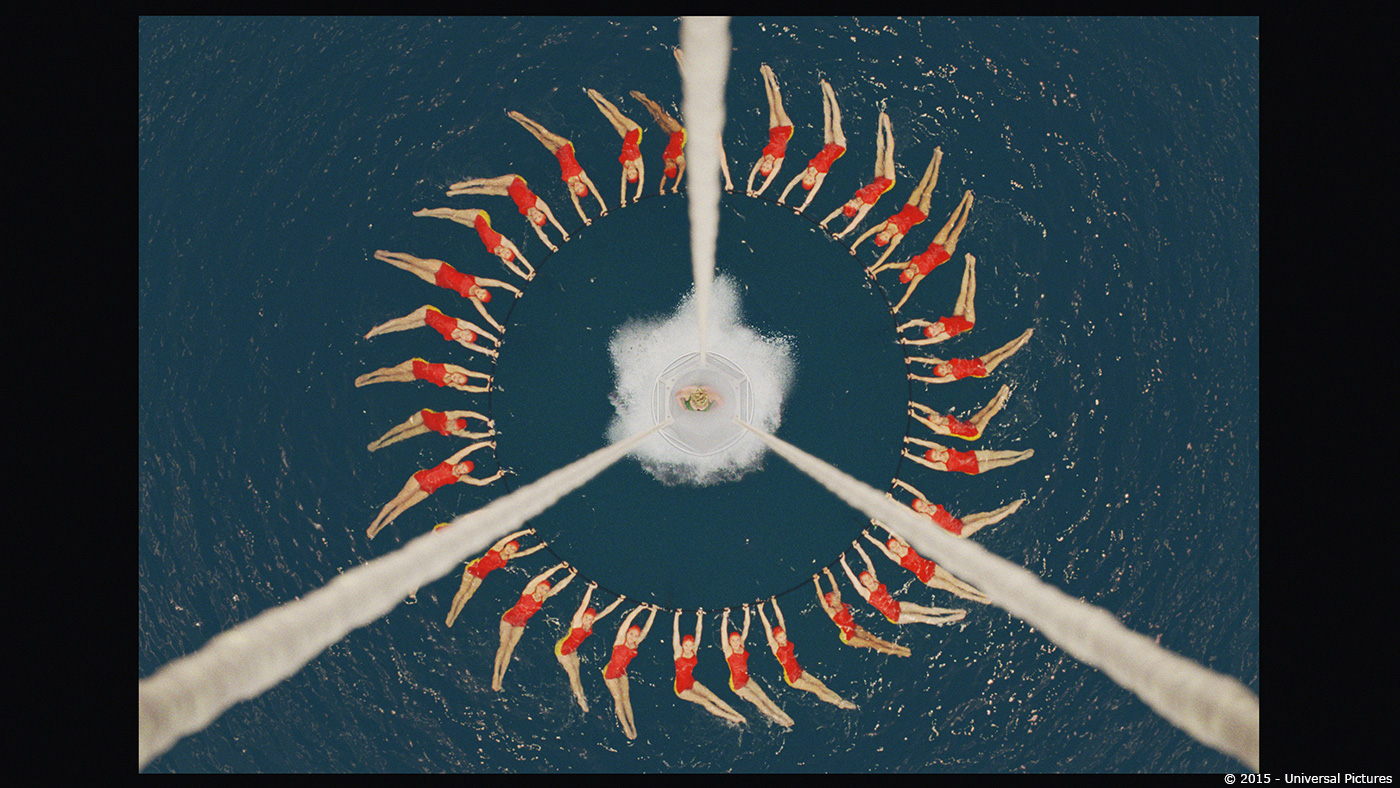 As the whale mouth closes and engulfs Scarlett, the shot goes to black and we transition to a high angle shot that looks straight down on the swimming pool. The whale comes right up underneath, spouts water directly up towards the camera and then descends below the surface. We used a full CG whale as well as water sim to create those surface ripple effects. We then paired practical spouts from the SFX team with CG spouts to get the water-firing whale effect just right. The synchronized swimmers, a real-life troupe called the Aqualillies, re-appear and proceed to perform a highly choreographed water routine. There are more spouts and eventually Scarlett re-appears in a big plastic tulip. Because of the rigging though, there were some issues with Scarlett’s movements in relation to the camera. So instead of her actually rising up towards us, we kept her stationary on a bluescreen and lowered the camera down to her, creating an illusion in direction. The entire shot runs over two and half minutes long and was definitely our most complex shot in the film. 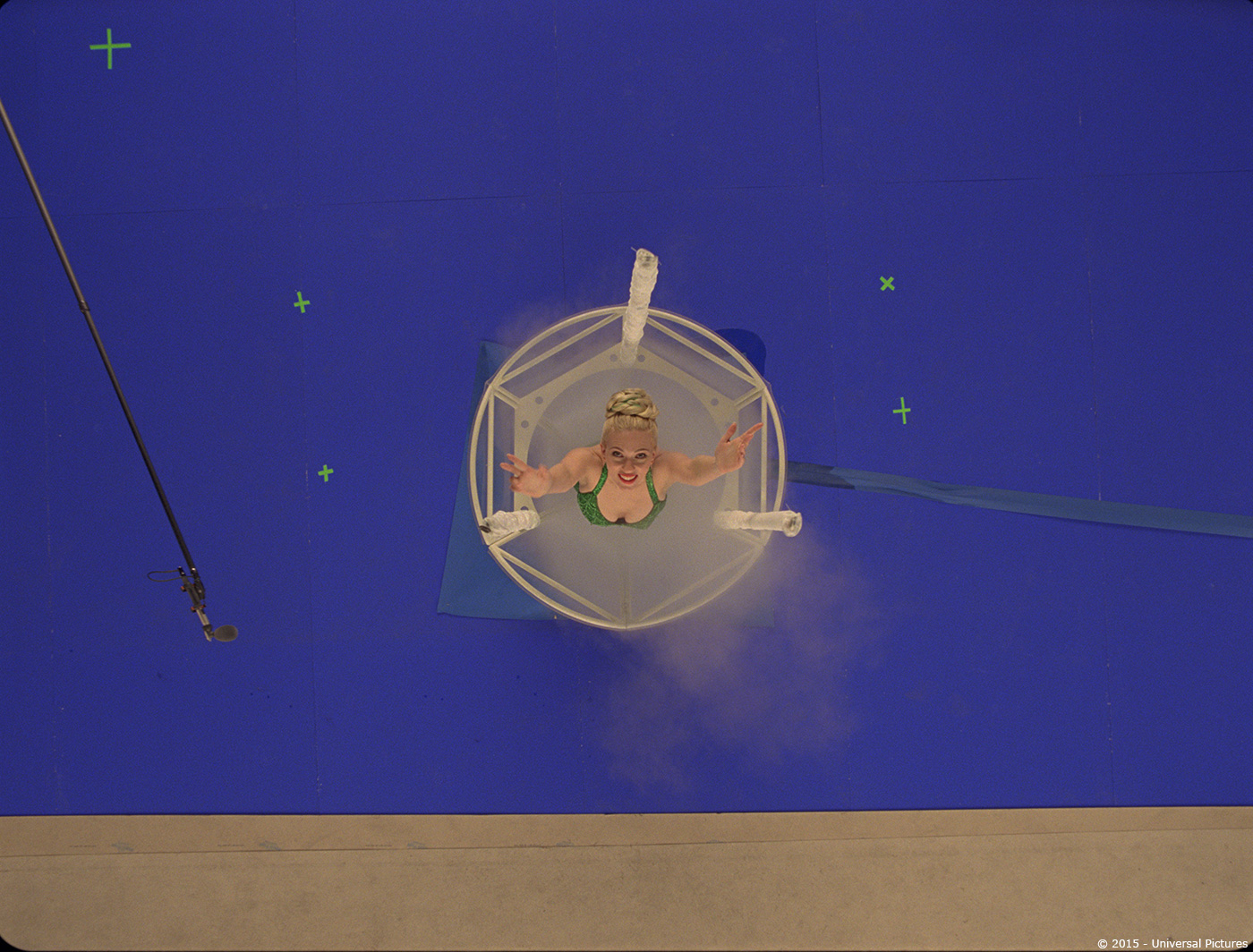 We can see the old Los Angeles in few shots. How did you create these shots?
The location department did a great a job of finding places that still had the right look and that required minimal cleanup. There’s one scene though where Hobie is trailing Burt and we did a full CG build of Hollywood Boulevard at night, complete with neon signs and passing cars. We took copious notes on the style of 1950’s Hollywood through visually strong movies like KISS ME DEADLY. The shot ended up being on Hobie with our CG environment playing as a reflection on his windshield, which gave it a really nice noir quality.

Some sequences from the peplum movie involved crowd duplication. How did you created this crowd?
Well first we heightened the arch by placing an extended arch in place of the once green screen portion of the prop. From there, we tiled the soldiers as far off into the distance as you could see to give it that endless effect. A part of the VFX have to replicate the old fashion look of the optical effects especially the wide shot of Rome and some background. How did you approach these shots?
In the 1950’s, matte paintings were heavily used optical effects. So for example when George Clooney is uptop a hillside in Rome looking out over the landscape, we referenced the work of matte painting legend Peter Ellenshaw form QUO VADIS. This was an example of where we recreated period effects because the matte painting we created was very stylized and doesn’t look like the kind of photoreal environment you’re used to seeing in modern films. In fact, we had a version that the Coen’s said was “too good”, so we had to back track and make it look a little more painterly.

How did you created the environment for the house on the beach of Burt Gurney?
For the exterior work we looked at Matthew Yuricich’s matte paintings from NORTH BY NORTHWEST. At the time though, this was cutting edge movie magic, and while we couldn’t make our shots look quite so fake, we did want to reference that style. The interiors were a green screen environment where we utilized plates we shot along the Malibu coast. Again, we found ourselves walking a line between being totally photoreal and also stylized. One decision we made was to shoot without glass in the windows. We added some reflections back in, but not so many to make it completely accurate. One sequence is featuring a submarine. Can you tell us more about it?
Even though the sub ended up being done entirely digitally, we took into constant consideration how popular the use of miniatures was back in that time. This meant messing around with elements such as the scale of the CG water and playing with depth of field. This helped give it a stylized look and worked well with the practical photography – which utilized a big painted backdrop for the sky to really blur the lines between reality and the world of movie making. What was the most complicated sequence and why?
The sub sequence because of all of the heavy water simulations and the Jonah’s Daughter shot because of the shot length and wide variety of work needed to complete the scene.

What do you keep from this experience?
Just how much fun our job can be when we have the opportunity to work with great filmmakers like Joel and Ethan, Roger Deakins (DP) and Jess Gonchor (production designer). Having been a fan of the Coens’ movies for most of my life, I think their work has really helped shape my own aesthetic. As a result, I found that it wasn’t too difficult to get on their wavelength and figure out what they wanted and what the film needed. 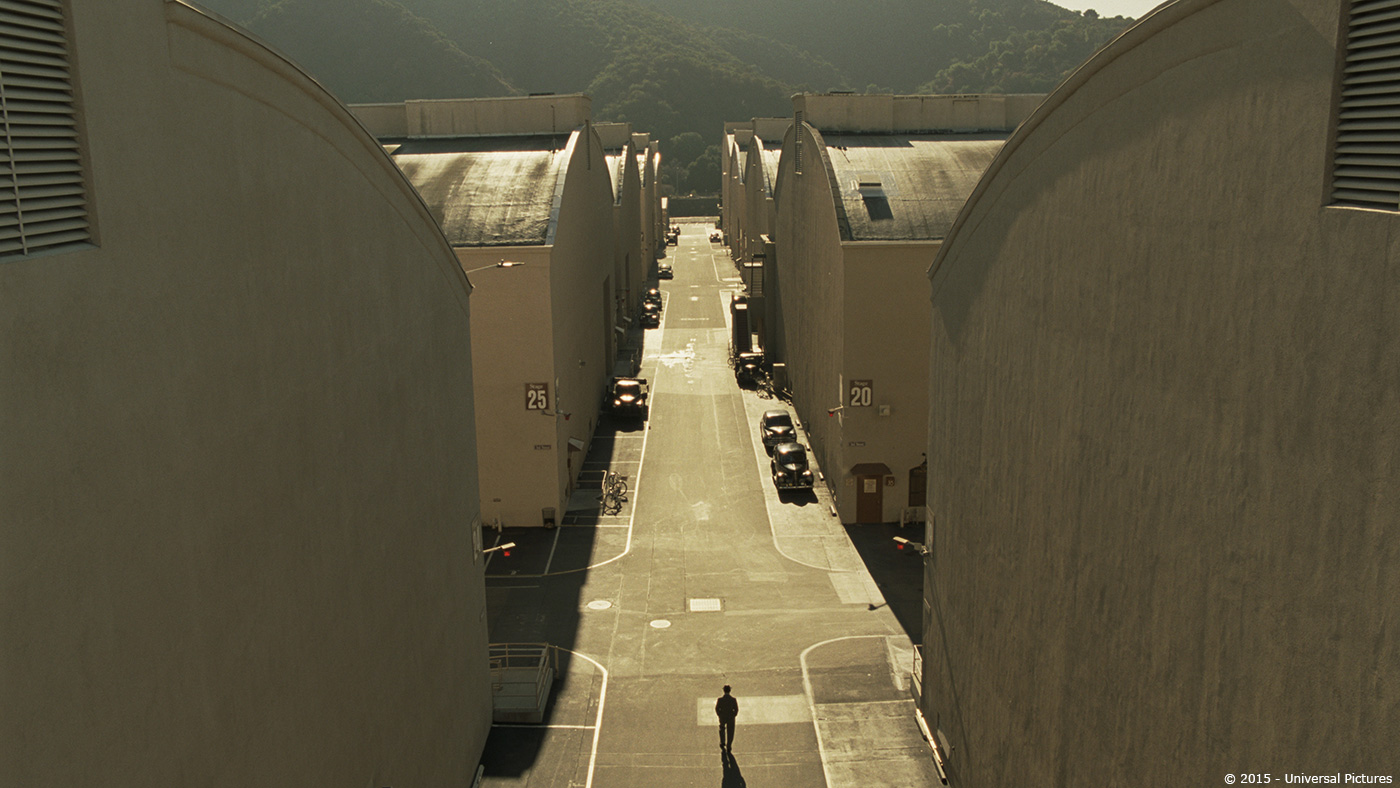 How long have you worked on this show?
I came onto the project pretty close to the beginning of it all, back in August 2014 when pre-production first started to ramp up. We finished our work in November 2015.

How many shots have you done?
The Psyop New York location worked tirelessly on 223 shots for the film, and a separate in-house artist delivered around 100 more. This film was just packed with fun, quirky touches. 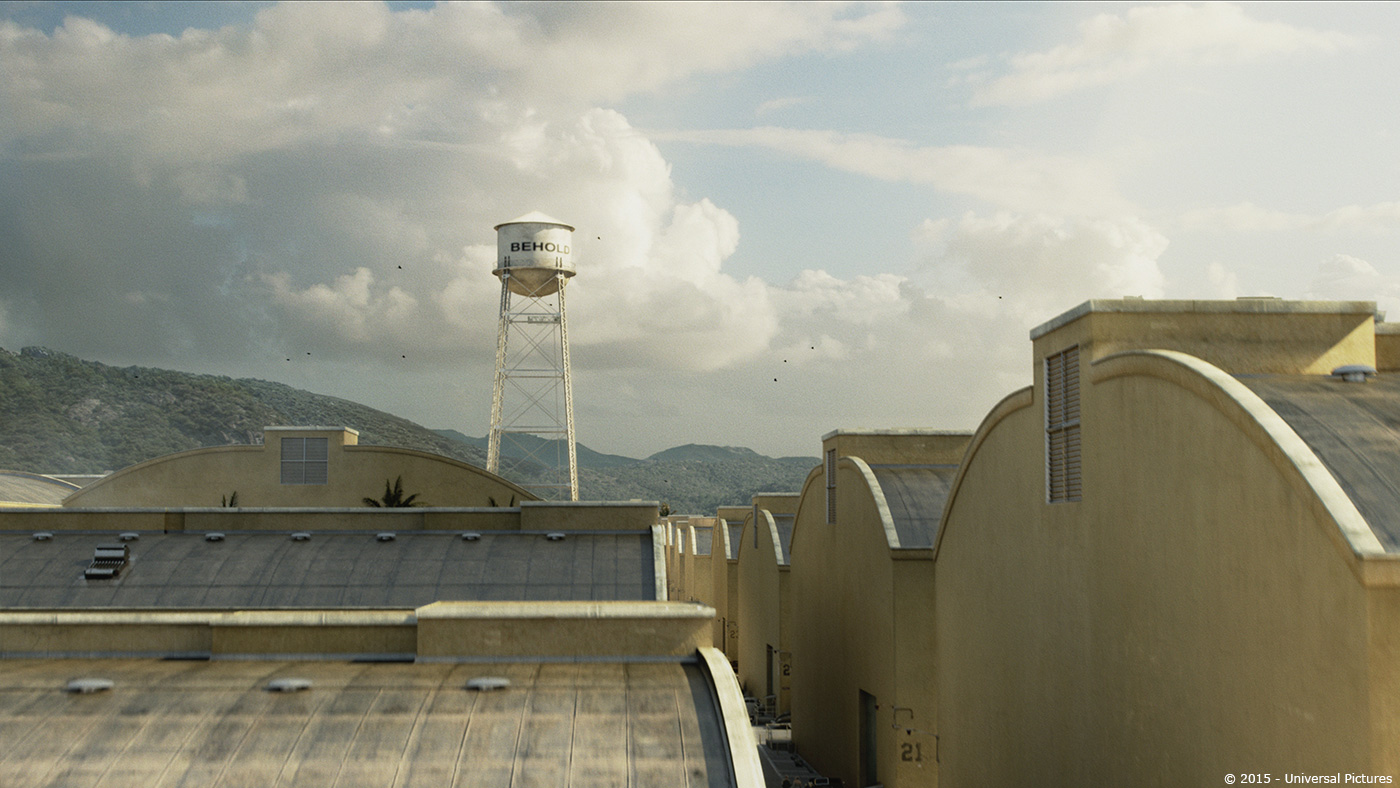 What is your next project?
We’ll see.